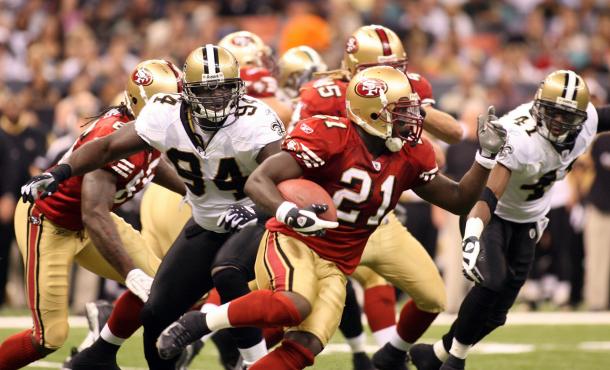 Although most of the attention will be on the offenses that will be in action this weekend, there will be some great defenses in action this weekend.  The Niners defense will have its work cut out for them in trying to stop Drew Brees and the Saints.  The Texans battle with the Ravens will feature two of the leading defenses in league and it will probably be a low-scoring battle.

When the Saints travel west to meet the 49ers, we will get to see the classic offense versus defense matchup. New Orleans continued to explode offensively last week, as they put up forty five on a talented Lions team, inside the Superdome. The Drew Brees led offense has looked unstoppable this season when playing indoors.

Last week marked the sixth time that the high powered offense was able to put up forty or more points at home, and it was the third consecutive week they were able to accomplish that feat. But will the Saints be able to take their dome success outdoors, against a dominant defense? I don’t think so. The Saints are not the same team, or the same offense when playing outdoors.

Their offense hasn’t scored more than thirty when playing outside this season (they scored 34  in week one, but seven came off of a Darren Sproles punt return), and the production is simply not the same. I also think the matchups favor the 49ers in this contest. The Niners will likely try to pound the rock with Frank Gore for a couple different reasons. Obviously they want to shorten the football game and keep the Saints offense on the sideline, but they will also try and run the football in this one, because they can.

New Orleans has struggled mightily to stop the run this year, as they have given up five yards per carry on the ground. Their defensive struggles have really been exploited on the road. In seven out of eight road games the Saints have given up over 100 yards rushing seven times. San Francisco has also been a great home team this year, they went 7-1 straight up, and 7-0-1 against the spread, at home.

The Saints have posted a 5-3 road record, with a 4-4 mark to the spread. The Saints are 3-2 straight up when playing outside, but are just 2-3 to the spread. The 49ers are very under valued here as a home underdog. The Niners have a great defense, and a very solid running game, and as long as they take care of the football I see them winning this football game. Sean Payton has done many great things since taking over in New Orleans, but one thing he hasn’t been able to do just yet is win a road playoff game, and I don’t think they do it here. Field goal game here either way, and I would lean towards the 49ers to come away with a victory. This is a great value play here with San Francisco getting points at home, take the four with San Fran.

HOUSTON at BALTIMORE, THE PICK, BALTIMORE -7.5

The well rested Baltimore Ravens will host a very banged up Houston Texans squad on Sunday, and this game will feature two of the leagues elite defenses. Both of these football teams are very similar in many different ways. Both play great defense, and possess the ability to run the football very well. However, this game has the potential to get real ugly.

Both defenses stop the run very well and I really don’t trust third string quarterback T.J Yates to be able to make many plays against a fierce Ravens defense. Another thing that can’t be ignored is the fact that most of Baltimore’s struggles this season have come against far inferior opponents, in let down situations. Motivational factors really aren’t a factor come playoff time.

The Ravens have played their best football against quality teams. Baltimore posted an impressive 6-1 record against teams with winning records this year, and were 5-1-1 to the spread in those games. Don’t forget the fact that Baltimore is playing at home in this game and they were 8-0 straight up at home in the regular season.

Houston might keep this game close for a while, but eventually Yates is going to have to make plays, and that is when I see this game getting out of hand. The Texans have come a long way with everything they have had to deal with this season, but the ride will end this weekend. Take Baltimore to cover the 7.5 .

The Flyers Need A Physical Defenseman

Steve Spagnuolo – Will He Return To The Eagles?