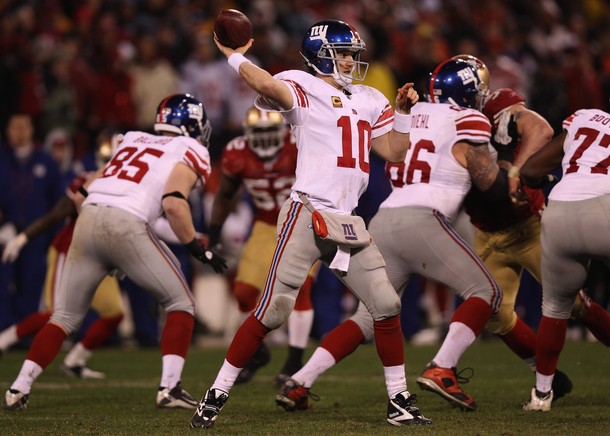 The Philadelphia Eagles, on paper, are good enough to play in the Super Bowl.  They, like the New York Giants or the New England Patriots, on paper, belong in Indianapolis.

This may sound all too familiar, but please stop with the dreaming.

With all the talent that the Eagles possess there is often a gap in what they are capable of and what they actually accomplish on the field. Too often the team has relied on the concept that they “should have” or “could have” won a game if a few bounces went in different directions.

If the Eagles ever want to join the Steelers, Patriots and now, as much as I hate to say it, the Giants, as one of the elite organizations in the NFL they need to let their play on the field do the talking. No more questions about what-if or fumbling quotes masking the fact that the team lacks the heart to win when it matters.

The key to success is as simple as a quote from a favorite movie of mine Zombieland.

There is no doubting the talent that this team possesses. Michael Vick is an explosive quarterback with an arsenal of wide receivers, who can leave any opposing cornerback in the dust. They have a running back in LeSean McCoy that conjures up images of Barry Sanders as he slices and dices his way through linebackers.

They have a defensive line as menacing as any other in the league, but those same players need to work on the intangibles. They need to do the little things that earn you wins in the close games that eluded them throughout the year.

Anyone who witnessed a Marty Mornhinweg’s press conference over the last few games of the Eagles season knows how much of a sore spot the team’s ill-timed turnovers were with the offensive coordinator.  Just like Eagles fans, Mornhinweg would wince when the team’s god-awful turnover differential was brought up.

Hell, if the team had showed up at all against the Seattle Seahawks they would have been playing the Falcons Wild-Card weekend.  But, the fact of the matter is they didn’t do these things. It is the reason that, hands down, they do not compare to the Giants or Patriots right now.

The Eagles do the talking, while these teams do the winning.

This isn’t all completely bad. The talent will always be there. Count me among the few who think another year under Juan Castillo should do wonders in gelling together the defensive unit. I also think that, if healthy, and with a balanced pass-run ratio, that Mike Vick can lead an offense can put up some pretty hefty numbers.

But, please, Mr. Reid and company, do not drift pointlessly upon the what-if’s or should-haves over the off-season. Do not worry about how the Giants, a team the Eagles beat with Vince Young at the helm, are about to play in another Super Bowl.

Work towards making a better team and make them realize that wins are earned on the field, not in some hype competition.

The Eagles and their fans need a Super Bowl, not the promised dream of one.

Join me tonight on 94WIP at 10pm and we will talk about why the Eagles have been coming up short.