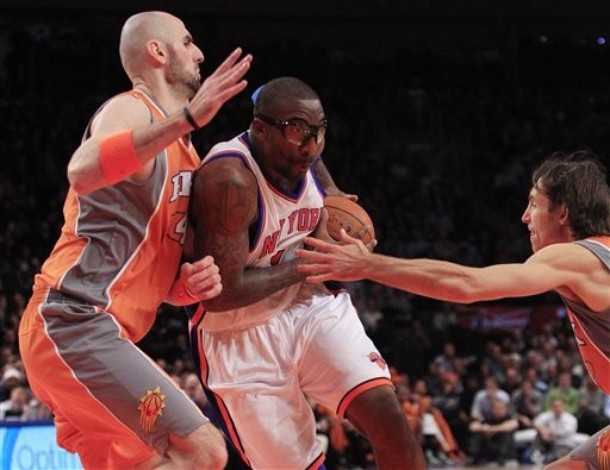 CSNPhilly.com reports that the Philadelphia 76ers asked the New York Knicks about power forward Amare Stoudemire.  It’s not that a deal is imminent but we’re told that the Sixers were doing their homework with a guy who could become available at some point.

The Knicks are a losing team right now and there’s no telling who they may end up getting rid of before the season is over.

“According to a league source, the Sixers have inquired about Stoudemire, though it was categorized as “due diligence.” Nothing is said to be imminent or even in the early stages other than just talk, the source said. Nevertheless, in past seasons the Sixers were reportedly discussing trade scenarios with the Phoenix Suns in order to acquire Stoudemire. Whether or not the Sixers can afford Stoudemire, of course, is an issue too. Stoudemire is the ninth-highest paid player in the NBA after signing a five-year, $100 million contract before the 2010-11 season. He earns $18.2 million this season, $19.9 million next season and approximately $45 million between 2013 and 2015.”

Should the Flyers Open Next Season in Europe?

I would pass on Amare and look for young talent or someone less entitled.

Maybe Kenyon Martin or a Grant Hill type of guy.

Altra id pass on all mentioned… i would just play this season out and wait until the off season when Dwight Howard will most likely be available to sign, then we can amnesty Elton brand freeing up 18.2 million along with nociono’s contract coming off the books and then some.. the sixers are in a good place right now, i really would hate for them to mess with what they have right now, id prefer them to stick with what they have then add to the talent…

fk it, get them both….dump igg , noci, and brand, although brand was a beast last year, that would put us back.

2000man, i dont think there trying to get them both but i could be wrong… But i wouldnt really add amares salary to this team, were almost out of cap prison, i dont want them doing anything foolish. I say play this season out with the current team, then try and sign Dwight Howard, i dont want the sixers trading iguodala to the knicks for amare, the sixers could probably get more for him…But again id wait for this season to play out, but if they could make a deal for a superstar than id do it i just dont want to trade y entire roster for a superstar, it wouldnt make sense… But if they can trade for a deron williams, get a amare stat and sign a dwight howard, which is wishful thinking, i would do it… But again i want us to stick with this team until the end of the year then make moves…

Butn them making inquiries is a good sign because its showing that the sixers are trying to win a championship and want to be a championship caliber team…there looking at where they are in the standings and the kind of team they have, there maybe 1 or two pieces away from contending, very similar to that 2001 season when we went to the finals and traded for Dikembe Mutumbo to propel them over the top to the finals, thats what they are trying to do this year but i say stand pat and dont make any moves that you will later regret…

Stay away Stoudemare would be my suggestion.. He is a player on the way down and quickly I belive.. His contract is a nighmare and would put a stranglehold on the progress the SIxers are beginning to make..

I believe STAT has a few more really good years left but i dont want his contract nor do i want the sixers fooling around with the current chemistry.. we ll end up like how the knicks are now nc they made a foolish deal bringing carmello in for all those players they got rid of.. there depthless and have no defense at all… they may not even make the playoffs.. thats the reality of trying desperately to acquire superstar talent, you start to become obsessed with a name and ignore everything else..

The sixers may try and trade for Bynum.. thats who they may look to move iggy for but again i want to wait and try to get Dwight Howard over all other options.. I think tonights game against the magic is a huge one and can begin to get the wheels turning in howards head and may move him to wanna put philly in his list of destinations..