Win Over Lakers Shows The Continued Growth Of The Sixers 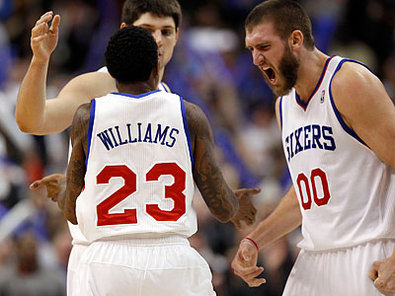 So this is what we were waiting for right? To see how the Sixers would hang with the big boys. This is easily their toughest stretch of the schedule. I like to call it “Murderous Row”. Doug Collins likes to call it “Death row”, either one works for me. The Sixers are showing us what they are made of and keeping the “Haters” at bay. So, I figure what the hell?! I will give you guys my thoughts on the first five games in a paragraph of each calling it BOOM or BUST. Feel free to think I am a little crazy or a complete moron because I can be both at times. It is fun to bash people sometimes even yourself. So let’s go……

We learn that they can win an ugly scrappy game against a solid team. They only shot 37% but held the Magic to 33% from the floor. Those type of games help build character.  The Sixers held the Magic in the first half to 5 minutes without scoring a field goal. The did it again the second half. Like I said before the Magic seem to be a ticking time bomb with all that Howard BS going around. Still is a solid win. BOOM.

We learn that Sixers can handle their business even against a good team that was down two starters. The Bulls did not have Rip or Deng but they still had Rose, Boozer and Noah. The Sixers buried them as they should of without those two. The Sixers made Rose work for every point he got. The Sixers bench out scored the Bulls starters 55-44. The Bulls played the Knicks the night after and during the post game interview after the Bulls win over the Knicks Rose was asked what he thought about the win. His first words were “Hey, we played a very good team (Sixers) the night before”. BOOM.

We learned that they still have room to grow. The Heat are on a another level. The Sixers were able to hang with them for three quarters until the Heat went boom. Sixers were down just 6 points in the fourth quarter then a 15-0 run put the Heat up 21 just like that. When you play a team like the Heat you have to have everyone bring there “A” game. When you are down your starting center then you get zero points from your power forward, not good. Even though we found out that Brand injured his shooting hand during the game. The one guy that I was impressed with was Thad Young. He was relentless against the Heat. He just attacks the rim. BUST.

We learn that this team is resilient as hell even against a good. This could have been an easy trap game coming of an emotional

loss the night before. Not this team, no way. This is why I love this team. They will give you their all every game. They shot 50% from the floor. Hawes looked like he did not miss a beat after missing the last 10 games neither did Vuc after he missed the last 7 games. They combined to shoot 14-21 from the floor for 29 points. The Sixers bench had 54 points lead by Vuc, who had a team high/career high 15 points. BOOM.

We learned on night where Kobe moved into 5th all-time and a night where the Sixers get out rebound by 55 to 30. For the love of God, Bynum 20 rebounds and Gasol 11 rebounds out rebounded the Sixers them selves. It was the Sixers stealing the show. It was Iggy getting the stops on Kobe. He made Kobe shoot 2-12 from the field in the second. It was Lou scoring 7 straight under 2 minutes to put the Sixers up and to finish off the Lakers. We all knew this team plays until the end we just did not see it against a good team. Well, we saw it. I think we might have found our closer in the process. What was so amazing about this game was that the Sixers only turned the ball over just 4 times all game.  Kobe shot 10-26 from the floor for 28 points. He had 24 points in the first half. Nice job Iggy. BOOM.

The Sixers are now 4-1, and this was the toughest stretch for them. The Sixers have now held their opponents to 90 points are less in 16 games so far. They showed us they have more depth than a lot of these teams in which we knew already. I tell you what, they most likely not win a championship this year but the team has an opportunity to make some noise in the playoffs. That does not really sound as crazy as it once did before. I got to say a lot of BOOM’s this time. Me like..

Great Game by the Sixers… Fans need to get behind and support this team and sell the arena out. Flyers sell out, Sixers not so much… I don’t get it.

Birdo…Flyers are just like the Eagles. All they can do is “make the playoffs.” Never a legitimate championship contender. Still no goalie. And they will go out in the second round when they face Boston. And the Sixers will go out in the second round as well. So I don’t see the Flyers being any better than the Sixers in any way. The Phillies are still the best team in town. At least they have the pitching to get to the post season and carry them. They at least have a chance to win the title if their bats get hot at the right time. The other three have almost zero chance.

Don’t count the Birds out. Now the the Giants won the superbowl I feel the Birds will have more drive and play better. We also how to realize Reid will be coaching under pressure because if the Eagles don’t make the playoffs he will be Fired. Since the will have OTAs and the regular training camp I feel these players will be much better. As long as Vick can reduce his turnovers and take least hits we will be fine. Sign Vincent Jackson, put the tag on Djax, sign a experienced linebacker and safety. If we make these moves and make smart draft choices we will be fine. The Birds will be contenders Next Season!!!!

Seen Waldo “i mean” Andy in the audience scouting tight ends and fastballs to throw at opposing offenses.

Chuck, the Sixers have blown elephant nads, since the Doc days, other than that mirage of a year in 2001. The Flyers are basically in the playoffs every year & pay $$$ to win. It’s that simple! The Sixers are still a mirage, with no chance of winning a Championship.