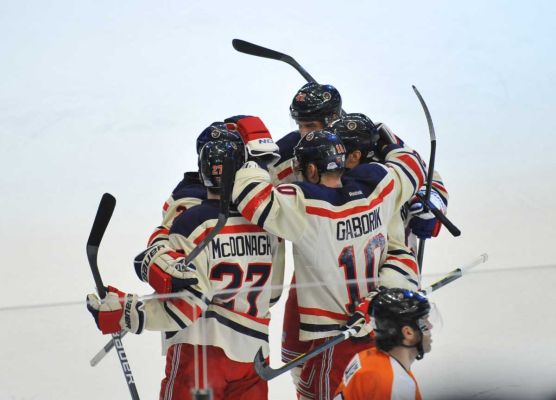 If there is anything that Flyer fans have learned about Ilya Bryzgalov throughout the course of his rollercoaster first season in Orange and Black it’s that his game is all about confidence. When he is confident, he is a top-flight netminder that is incredibly tough to beat. When he isn’t confident, it isn’t pretty.

Well, the confidence rollercoaster that is Ilya Bryzgalov may have nosedived and crashed and burned Sunday at Madison Square Garden with Marian Gaborik’s debilitating late second period goal.

With just a measly 5.1 seconds left in the second period of Super Bowl Sunday’s matinee in New York, prized Rangers sniper Marian Gaborik, with a defender draped all over him, wrapped his way to the front of the net and weakly one-handed a backhander along the ice that rolled up Bryzgalov’s downed stick paddle, found a hole and dribbled across the goal line to give the Rangers a 2-1 lead.

It could have very well been the worst goal Bryzgalov has given up all season and could very well timelessly damage the Flyers’ Stanley Cup hopes for this season.

Some Flyers fans are clamoring for Sergei Bobrovsky to be anointed the permanent starter. While Bob has played extremely well and deserves playing time, the fact of the matter is this: the Flyers are going nowhere without Ilya Bryzgalov being the number one backstop.

Like it or not, he’s the guy. He NEEDS to be the guy. It’s the reason Paul Holmgren freed up all the cap space over the summer. It’s the reason he was signed to the humongous, big nine-year, $51 million contract. While he may not have shown it as much as Flyer fans would like so far this season, Bryzgalov is a legitimate number one goaltender in this league.

Bryz was having a good week in giving up one regulation goal to both Winnipeg and Nashville. He then shut out the Devils in a bullpen appearance on Saturday. His confidence was clearly high. Sunday’s game looked to be much of the same. That was until the end of the second period.

Big game, maybe the biggest of the season. Terrible goal. Paralyzing goal in a big game = a confidence plummet of Titanic like proportions.

In CSNPhilly.com’s Sarah Baicker’s game story, Bryzgalov is quoted as saying “Mistakes happen. That’s part of the game.” True, but it was easy to tell that Bryzgalov was shaken.

Only 36 seconds after the Flyers tied the game at the start of the third period, New York defenseman Michael Del Zotto beat Bryzgalov on an easily stoppable one-timer that allowed the Rangers to regain a lead they wouldn’t relinquish. Would Bryz have made that stop if he hadn’t given up the rotten goal to Gaborik? We’ll never know but the odds would certainly have been higher.

Was it the pressure of the game? Or was it the bright Madison Square Garden lights getting to his head? Maybe it was the raucous Ranger crowd on his nerves? One thing is for sure: his confidence most certainly took a Tyson-like right hook.

That’s why this week is a huge week for Ilya Bryzgalov. Those frail goals won’t be easy to forget. Those are the kinds that stick around in the back of a goaltender’s mind. With three formidable opponents in the Islanders, Maple Leafs, and those pesky Rangers again, coming to the Wells Fargo Center this week, Bryz has the chance to redeem himself and get his game and, much more importantly, his confidence back on track.

Strong performances this week could set him up for the rest of the season, especially if he is able to exercise those Ranger demons. Inadequate performances could have him back out in the woods. (Remember the 9-8 Winnipeg game earlier this season? I know you do.)

For a guy whose game is all about confidence and having a certain swagger, this could be the biggest week of his career.

If things go well, hallelujah! If things go south, we all can look back to Marian Gaborik’s second period goal on Sunday, February 5th as the exact moment that the Flyers’ 2011-2012 season suffered a permanent wound.

Win Over Lakers Shows The Continued Growth Of The Sixers