Are the Rookies to Blame for Second Half Inconsistency? 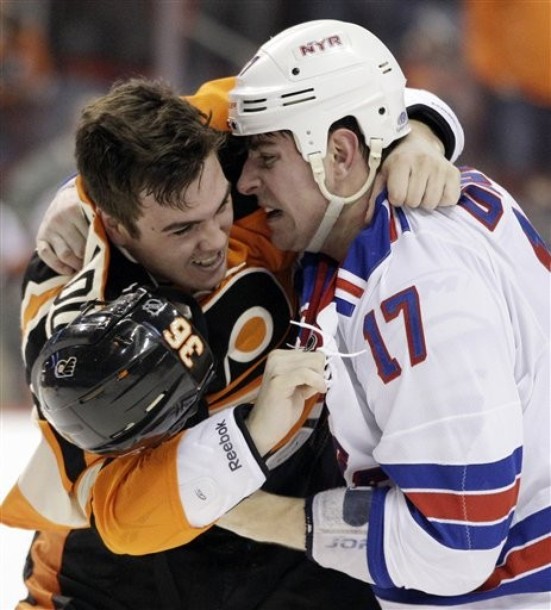 Flyers head coach Peter Laviolette was asked after yesterday’s loss to the New York Rangers if he felt the reason for some of the missed coverage in the defensive end was because of the youth on the team. He began to speak, and then cut himself off abruptly.

“Well, ye- well… I’m not gonna use that. We need to be better there. There was a rotation in one of them where our defenseman got caught up the ice behind the goal line, pressuring the puck, and just the way it turned out he was on offense. He ended up staying in and ragging some time down there. As we came back through the neutral zone we got out of sorts a little bit and they scored a goal there… but I’m not gonna make any excuses, it needs to be better there.”

It was a fair question to ask and a fair response from the coach.  The players that he has available to work with are beyond his control, and it’s his responsibility as head coach to ensure that every player is adhering to the system he utilizes in order to achieve success.

As Kimmo Timonen alluded to yesterday, though, the Rangers have found success largely because their players are buying into the system game in and game out.

The Flyers employ a system in which a defenseman jumps into the play in the offensive zone if he sees an opportunity to keep the puck in deep and the nearest forward slides back into his position for defensive coverage.

None of the five goals scored yesterday were the result of miscommunication in that system, but rather pathetic coverage at the net.

On the fourth goal, Erik Gustafsson, Tom Sestito, Zac Rinaldo, and Couturier were all on the ice.  Gustafsson missed a pass from Andrej Meszaros and then scrambled to get back in position. Meanwhile, Rinaldo was in a good spot to guard Artem Anisimov but only feigned coverage. He looked like he was waiting to break out of the zone instead of covering his man.

Marc-Andre Bourdon was on the ice for the fifth goal, but it was preventable if Matt Carle had followed Ryan Callahan around the net instead of leaving his side.

Bourdon re-entered the locker room yesterday afternoon after the players had mostly left and reporters were waiting to interview Timonen. He asked for the third period scoresheet from a staff member and then sat down quietly in the corner, studying the numbers for a few minutes before leaving again.

It’s been said for months how impressive this team is with all of the rookies they’ve dressed, but they are beginning to be exposed. Their liabilities can be reduced if players like Coburn and Carle step up their respective games the way Meszaros has lately, but it will continue to be a problem if the top four blue liners aren’t playing like the top four.

Adding insult to injuries is the way that Rinaldo and Sestito have not been intelligent lately in channeling their energy. Rinaldo had played well yesterday until the third period, and put the Flyers in the box late after trying to fight with Brandon Dubinsky. Sestito didn’t waste any time in the first period losing his cool and playing into the Rangers hands, which set up the first powerplay of the game.

Bottom line: Laviolette needs to ensure that his rookies are playing disciplined hockey and adhering to the system. That goes for his veteran defensemen too.

Rookie Eric Wellwood was recalled this afternoon from the Adirondack Phantoms just in case Jake Voracek isn’t ready to go against the Detroit Red Wings. Wellwood provides the Flyers with another option for the penalty kill (Voracek is usually the go-to forward if Talbot, Couturier or Read are in the penalty box), but it highlights another young player in a position with inexperience.

Injuries to many key players, inconsistent Goaltending all Season and some
questionalbe Coaching if you ask me.. Neither Goalie has any confidence in themself, the Coaches or teammates at this time.. 55 Games into the Season and still no defined #1 Goalie and you better have an established #1 Goalie heading into the playoffs and not is merry-go-round that we saw last year where no has confidence in who is playing between the pipes…

This team just needs to make playoffs and they will have a chance. I would love to see them pickup webber but let’s be realistic. Hal gill could stabilize the d, play the pk and handle big physical teams (Boston)

Coburn & Carle are stiffs, & I still can’t comprehend the ridiculous resigning of Coburn. What exactly has this guy done since being here. He is a 6’5″ waste of height, that doesn’t hit, doesn’t score or assist, doesn’t clear the porch, & is out of position, more than he is. Carle is flat out lost without Pronger, & can’t find an identity of his own. Neither of them can run a power play, & both make too much $$$, for what they provide. I’m tired of hearing their defense-men can skate good. Homer how’s about getting D-men that are actually good at something that can get you results on the stat sheet. With all of the good moves Homer has made, is just about the same, or more amount of bad moves, like Coburn, Shelley, Lilja, Walker, Upshall for Carcillo, overpaying for Bryz, & resigning JVR to an unearned amount of $$$, etc. etc. Get some good defense-men in here damn it!