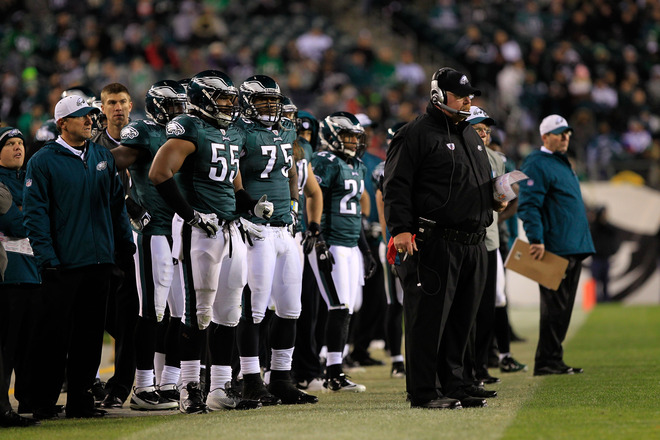 When the New York Giants walked off the field after winning their second Super Bowl title in four years, the Philadelphia Eagles off season officially begun.  If it had not already begun after their season ending victory of the Washington Redskins which ended in a disappointing season at 8-8.

Now the important work begins for the organization to get this team to the position they want to be and that is winning the Super Bowl.  Like the rest of the NFL, the Philadelphia Eagles will be going out to Indianapolis in a couple of weeks for the annual NFL Scouting Combine workouts by future NFL players.

The draft for most teams is a way to add and make improvements on your team.  The Eagles as of late have had so-so draft picks and well this draft is going to be very important for the team because they need some fresh young blood players who want to play and who are also ready to play in the NFL from day one.

Last off season the Eagles were a major player in the Free Agent market and they added some really good talent to their roster.  Will the Eagles hit the free agent market this off season?  The Eagles definitely have some needs they need to totally improve on and free agency is always the next option to look at.  The Eagles needs right now are linebackers and defensive backs.

The Eagles and DeSean Jackson look like they are going to keep the marriage together.  There as been so much speculation as to whether or not the two sides would continue this relationship after the season that Jackson had and how he handled his contract situation.

Well the Eagles made DeSean Jackson a franchise player which means in 2012 he will be paid with the top five receivers in the NFL.  This does provide more time for each side to decide on a longer contract.  DeSean could become a free agent after the 2012 season if he does not sign a long term deal with the Eagles.

Looking at the current Free Agent market there are some interesting players out there. Let’s take a look at the linebacker position.  Dan Connor, OLB  (Panthers) is a good young talent and he does play the position well.  He is a local product who did play high school football at Strath Haven and he is a Penn State graduate where linebacker is king.

Stephen Tulloch, MLB (Lions) is an interesting player.  He was a major contributor to a young and upcoming Lions defense and could provide some leadership to the Eagles defense.

The rumor mill continues as a couple of current free agent players have said they want to play for the Philadelphia Eagles. Now the question to be asked, are the Eagles interested?

Well former Steelers, Giants, and Jets wide receiver Plaxico Burress has come out and said he wants to play in Philadelphia.  In the last couple of days it is being reported by the media that the Eagles are talking with Randy Moss about the possibility of signing him.  Moss took the 2011 season off and has stated he wants to play in the NFL in 2012.

Do the Eagles sign either one of these guys or both?  How much do they have left in the tank to contribute to the Philadelphia Eagles is the question that needs to be answered.  It really does not hurt to find this out.

The Eagles last year made a huge hit in the free agent market and this off season look for them to make a couple of signings not like last year but they do need a couple of proven professionals in the positions that are of a need to them.  The key to this off season is going to be in the NFL Draft in April.

The beginning of this process begins in a couple of weeks when the Eagles coaches and scouting staff go out to Indianapolis and take a look at the young crop of future NFL players at the annual NFL Scouting Combine.  This is going to be a huge Draft for Andy Reid and the Eagles.  There are going to be so many expectations of this team going into the 2012 season because they do have the talent and they just need to fill in the gaps.

Let the off season begin and lets see what this organization does this time around because this is no doubt the most important one of Reid’s 14 year regime.

Luke Kuechly Has It All, But His Speed Could Be A Problem