Phillies Bats need to be Clutch in 2012 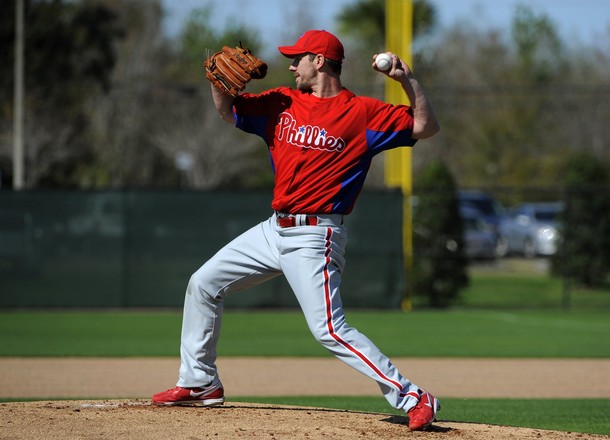 Spring training is officially underway in Clearwater and the Phillies enter 2012 eager to get the bad taste out of their mouths from the bitter end to the 2011 season. Pitchers and catchers have officially reported and a handful of position players including Chase Utley, Hunter Pence, and Ryan Howard have arrived.

The hype that surrounded the opening of spring training last year doesn’t seem to be there going into 2012 which might be a good thing for this squad. 2012 is a make or break season for the Phillies. The core of this team isn’t getting any younger and the window of opportunity to win another championship is closing.

Since the 2008 World Series Championship the Phillies have regressed each season. In 2009 they lost to the Yankees in the World Series. In 2010 the Giants defeated them in the NLCS and last season amidst a season surrounded by hype with the addition of Cliff Lee they still managed to come up short in game 5 against the eventual champs the St. Louis Cardinals. The Phillies of 2012 are a veteran bunch with the talent and determination to win it all. They realize the time is now as they continue to age every season.

The 2012 Phillies will be a force to be reckoned with once again when it comes to pitching. Cole Hamels is entering a contract season and will be pitching lights out baseball in order to receive a long term deal from the Phillies. Roy Halladay and Cliff Lee will once again be dominant at the top of the rotation.

Vance Worley came into his own in 2011 and I believe going into spring training knowing he has a spot in the rotation will allow him to focus and be even more prepared for 2012. He’s clearly enjoying his time learning from the best in the game in Halladay and Lee and will continue to benefit from pitching behind them during 2012. I believe Worley and Hamels will be the backbone of this rotation for years to come once Halladay and Lee move on or retire.

The biggest question mark of the rotation going into 2012 will be Joe Blanton. He was sidelined throughout most of 2011 due to injury and will be a 4th or 5th starter going into 2012. Blanton is always the subject of trade talk but I can’t envision another team wanting to take a chance on him right out of the gate until they see how he bounces back from his injury. Blanton doesn’t need to pitch lights out baseball and if you can get him through 5 or 6 innings each start and either have a lead or be down by only a run or 2 it will be enough.

Hitting will be the big question mark going into 2012. On paper this lineup looks like it should be formidable but I can’t forget about how unclutch they were against St. Louis in game 5. This team underachieved in a major way in the most clutch scenario any baseball team could be in which is a do or die game. The Phillies lineup needs to be clutch when it’s needed in 2012.

Ryan Howard throughout his career had done a fantastic job of hitting homeruns when the Phillies already have a 3 or more run lead in a game. We need Howard and the rest of the guys to come through when down by a run or 2 in the 9th inning or when the game is tied going into the 8th or 9th inning.

The 2008 Phillies were absolutely clutch when they needed to be which is why they had a parade. Even Pat Burrell chipped in with clutch hitting when it was needed. The Phillies since 2008 have lost the ability to be clutch when it’s needed the most. I have high hopes for this team in 2012 just like everyone else in town but it’s tough to forget about how they let all of us down in 2011. They won 102 games during the regular season and looked like a team that barely made the playoffs once it started.

We all know this team can pitch and the addition of Jonathon Papelbon to the bullpen will allow the Phillies to dominate the later innings. The difference between this year and last year will be how clutch the lineup can be. If the bats don’t come through when it counts we may all witness another disappointing end to the season.

The window of opportunity to win another World Series is getting smaller and smaller. 2012 and 2013 might be the last really good shots this core has to bring home a title and if they can’t get it done this era of Phillies baseball will be nothing more than a nice run that underachieved. The time is now to win another World Series and to do that the bats need to be there when the game is on the line.

Until Linsanity And the Knicks Focus On Defense, Sixers Are Still Better Team

John I’ve always found you to be a very fair guy, but you’re not being fair to Ryan Howard. Most of the Philadelphia fan base hasn’t been fair to him.

Clutch hitting wasn’t the only reason why the Phillies didn’t win last year. It was also a lack of clutch pitching. Cliff Lee had a 4-0 lead against the Cardinals and got knocked out of the game in a few innings. He didn’t have to be great in that game, he just needed to do a decent job.

Howard hit a home run to win the first game and had put them ahead in the second game with 2 RBI’s. If Lee does his job the Phils would have swept the Cardinals because Cole Hamels pitched them to a win in game three. I notice you didn’t even mention Lee in the article.

As for the lie, about Howard hitting home runs when they’re ahead by three. In the last six years in the Major Leagues, Howard has had more RBI’s to put his team ahead in games than any player in Major League Baseball. Look it up.

Philadelphia fans have their favorites who they will never criticize. Chase Utley is one and Cliff Lee is the other. That’s why Ryan Howard is easily made the scapegoat.

First, although Howard struggled in the last series of the last 2 postseasons, you are being ridiculous by saying he hasn’t been clutch for this team over his career. You lose credibility by making statements implying otherwise. Second, If you actually are suggesting Joe Blanton should ever take the mound again for the Phillies, you are truly a twit. Blanton is an overweight, out of shape, plug who needs to be the #3 starter for the Pirates. What part of he isn’t good enough don’t you understand?

Phillies Bats need to be Clutch in 2012. No kidding John, way to state the obvious. But John, you’re right, the fact is, he mostly hasn’t been clutch. Also he was prematurely overpaid, & now they will suffer for it. While he is a good power hitter, he isn’t a good hitter & hasn’t been since his MVP year, isn’t a good situational hitter, he strikes out entirely too much, doesn’t hit to the opposite field, leaves too many base-runners on base, is a butcher at first base, & no pitcher has feared him in 3 years. Look at the facts, that his stats have declined each of the last 4 seasons, along with his weight & muscle. HMMM, I WONDER WHY!? Same goes for Utley, injury prone, declining stats, no more power, HMMM!? BTW, did anyone have any confidence, during that last at bat, that he’d extend that game or series? I surely didn’t! When he went down, while he started to run, my initial thought was, well there goes the chance of trading him in the off-season, & getting Pujols! No way to Blanton!