Until Linsanity And the Knicks Focus On Defense, Sixers Are Still Better Team 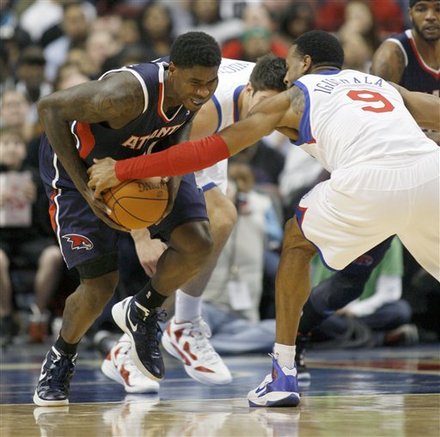 It was a perfect Sunday afternoon sitting on the couch watching basketball with my three year old daughter. She was reacting to every movement during the game. It was funny as hell. The game was Knicks/Mavs. I was waiting for the Sixers to come on.

I am sitting there watching mister “Linsanity” himself make plays all over the place and some guy named Steve Novak looking like “Larry Legend”. The best part is that this dude hits his 3rd or 4th three in a row and then gives the MSG crowd the Aaron Rodgers discount double check. Really bro? Nice.

Did anyone else see the star treatment Lin is getting already? That flagrant foul call in the first half against Lin might have been the softest flagrant foul that I have ever seen. That being said, Lin continues to put up numbers and W’s, which is the most important stat.

The Knicks are now 8-1 since Lin was inserted into the starting lineup. Listen, I hate the Knicks and all most everything New York. It is my Philly complex. I can not help it. You guys understand that. I will tell you one thing though this is kind of fun to watch the Knicks do this with out Melo in the lineup.

I am by far the biggest Melo hater I know. I will admit that. He is a great scorer but just flat out destroys a team’s offensive flow with his entire one-on-one play. There is a time for one-on-one play, but not the whole game. The one thing that popped into my mind watching the game was, “should the Sixers be nervous now?”

They still have a 4-game lead in the division over Boston and NY. The Sixers have hit a wall of late. We all knew that this part of the schedule was where we where going to find out what this team was made of. There are now 5-6 in this tough month of February after losing on what might been the worst call I have ever seen to the Timberwolves.

Seriously, this has been the worst officiating this year that I have ever seen by far. You let the players decided the game not the refs. Idiot! Ok, I am alright now. What we found that out this Sixers team is solid. They will give you max effort every night on the defensive end no matter what kind of offensive night they are having. The one thing that still hurts them is when they have to play a half-court set on a consistent basis. They can do it in small samples.

The one guy that helped them in the half-court early on was Spencer Hawes. Hawes is being missed a lot by this team and it seems like he won’t be around anytime soon. He will see a specialist soon for his Achilles after wearing a boot for a couple of weeks.

The Sixers used him as the filter in the high-post with running screens and back door cuts off him for their offense in the early going. They took advantage of Hawes passing skills. The Sixers are 12-2 when he plays and 8-9 when he does not. Who knew that Hawes would be that important to this team? I sure as hell did not. He is not he cure all, but he would help.

So can the Knicks or the Celtics catch the Sixers for the Atlantic? They could. The Knicks have a ton of scoring power but I still don’t think they can guard anyone. The Sixers can score and defend with the Celtics. The Celtics have the experience over them and, if they need a bucket, they can go to Pierce. The Sixers seem like they are not going to do any major trade this season to help them out.

They are going to ride out this roster to see how far it takes them. I am okay with that. Then make decisions in the off-season. I think the Sixers can hold on to the division. I am banking on the Celtic’s age, Melo screwing up the chemistry that Lin the Knicks have now and the Sixers hot start. Hopefully I will not be eating my words. By the way, the Sixers are now 2-8 in games decided by 7 points or less.

Could The Eagles Catch Lightning In A Bottle Like The Giants?

Phillies Bats need to be Clutch in 2012

Dag thanks for reading bro. All I ever really said was that the Sixers could hold on to the Atlantic because of their hot start. The headline is not mine. My point of the article was to say that the Sixers still could hold on. The headline does not fit right. Knicks are more talented then the Sixers. No doubt about it. But Melo could srew all the chemistry Lin has built. Melo destroys offenses with has one on one play. The sixers are a team. That is all I was trying to say even though the headline said differently. Thanks for reading again though bro! I do not mind the blasting. I can be jackass from time to time. Lol.

The Knicks/Celtics will surge ahead the Sixers by Season’s end..
The Sixers are too much of a jump shooting Team and when opposing Teams protect the ball and get them in a half-court Offense, it’s difficult for them to score or to out-rebound anyone..They miss Hawes big time..
The Sixers will most likely end up a 6th/7th Seed, a better teams then last Season but still aways to go to compete with the upper echelon teams in the East or in the NBA in general..

Dag, who said anything about filling the seats? That’s not necessarily related to being a better team. Nobody would argue against the statetment that more stars would fill more seats. But this article was about a simple question – is NY a legitamate threat to the 6ers now?

I think it all has to do with Melo. I agree with Joe in his hate for Melo – I was at Pitt when he was at Cuse so my hate started then. He’s an ego headcase who can score very well, very consistently.

I think Lin is a threat to the 6ers. I think a Mike D’Antony team with all the pieces their trying to put together isn’t that big of a threat. It will come down to the health of the 6ers big men, and what if any moves are made around the league.

But it’s a worthy and reasonable question. Good article Joe

As much as I hate to say it….it’s only a matter of time until the Knicks take the division.

They are better at every position on the floor.

All they need is time to gel and once they do, it’s a wrap for us. Why? Because we decided to sit on our hands when it came to trading Iguodala…..and because the #2 overall pick in the 2010 NBA draft who I keep hearing is “improving” and “going to be a player!” is really not “improving” at all.

The Knicks lost to the NETS last night…..ALL HYPE….if Lin played in Milwaukee we wouldn’t even know his name…..ALL HYPE, they lost to a team that barely has 10 wins…..ALL HYPE

I don’t know what you’re watching, but the Knicks are playing damn good ball.

I’ll tell you what I am sick of watching Birdo….the constant SportsCenter updates on “who Lin has a crush on”….”how Lin rates better than Magic Johnson and Isiah Thomas combined”……”how Lin used to shit in his closet back at Harvard”…oh, by the way, did I mention that he went to Harvard???!! That is what I am sick of watching Birdo! Two weeks….the guy has played like a total of 10 games and the NY Media has us believing that he invented the game and teaches the team calculus on the bus from the team hotel…give me a break.

the hope for the sixers is that their superstar melo decides to turn it into his show, then the knicks are back to being the knicks.

Greenfan — don’t hate on the kid beause the MEDIA shoves him down your throat. I enjoy watching him and he appears VERY humble in his interviews. I don’t know about you, but I like that in an athlete. A guy that plays for the love of the game and is a rolemodel for the kids.

You don’t see much of that this day in age.

I hope he continues to succeed and continues to prove the naysayers wrong. His story is a great one…..my only problem with it is that I wish it was about a Sixer.

@Birdo…I have no problem with Lin himself….it is the over the top media coverage that has me sick of the whole thing…in any other city (except maybe….just maybe LA) it would be a cute footnote, but because he is in NY, suddenly we have to have around the clock coverage.

Yeah, you are probably right Birdo….it would be nice to see a guy from the Ivy league do well, but I have had my fill of all of the NY stories….the only good thing is that we already saw how ‘Mello had trouble playing with Iverson, lets hope that the same thing happens again.

Its an amazing story thats why he’s getting all the media hype. The kids Asian and was undrafted and came out of no where and balls! cmon man! just admit your a hater and you cant stand seeing any NY team suceed. If Lin was on your scrub team of no names this whole blog site would be dedicated to Jeremy Lin and you know it.

No ypu New York Maggot…it is because the Knicks have been so pathetic for soooooo long that they will grasp at ANYTHING…..lets build our team around the smart asian kid, that sound like a winner…..your team hasn’t done shit since the early 70’s….even when the league created a lottery and GAVE the Ewing, they STILL never managed to do shit….ha!! Go watch the Mets in Spring training…you gotta good one there maggot-boy

I didn’t know Jeremy Lin was Asian… He talks like he’s from New Jersey..