Temple Wins An Overtime Thriller; Dunphy Not A Fan Of Senior Night? 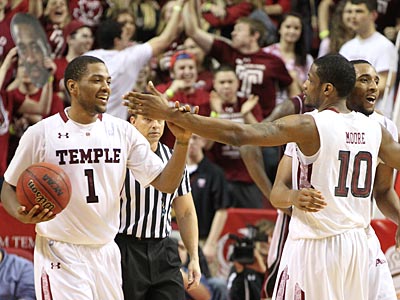 The Temple Owls were able to send their seniors off with a thrilling overtime win thanks in part to senior Michael Eric’s 19 points and 15 rebounds as Temple topped UMass 90-88 on senior night.

It seemed with two minutes to play in the second half, the Owls up ten points, were about to clinch the one seed in the upcoming A-10 tournament. The Temple student section chanted ‘stand-up’ to the crowd in preparation for their “I- believe- that- we- have- won” chant which appeared to be a Temple defensive stop away from starting.  UMass had other plans.

Chazz Williams drilled a three-pointer with 1:55 to play which began a 13-3 UMass run to close the 2nd half sending the game into overtime tied at 80. Williams finished with 26 points.

“You’re sitting there saying we are in pretty good shape at 77-67 and then we don’t guard Williams, we turn it over, we throw it away, we walk on the inbounds play and they make every shot they took down the stretch,” Temple Head Coach Fran Dunphy said on the UMass comeback after the game.

UMass kept its momentum to open up the overtime period, going on a 6-0 run. The Owls were held scoreless for nearly the first three minutes of OT, however, finally answered the Minutemen by going on a 10-2 run to end the game. The run was led by Temple’s Khalif Wyatt who converted and ‘And-1’ play and a wide open lay-up on back to back possessions to give the Owls a 90-88 win. Wyatt finished tied for a game high with 26 points and recorded the 2nd most free throw shots made in one game in school history with 17.

The win clinched the number one seed overall in the A-10 tournament for the Owls. It also brought Temple’s 2011-2012 overtime record to 5-0. With a Temple move to the Big-East that seems probable, the win also might be the last A-10 game in the Temple UMass rivalry.

“That was an epic battle it reminded me of the games back in the 90’s, both teams throwing haymakers and nobody quit or gave up two very good teams that were fighting tooth and nail to win the basketball game,” UMass head coach Derrick Kellogg said after the game when asked to reflect on what could be the final game of the rivalry. “I guess it will be called one for the ages.”

Before the game the Owl’s honored seniors Juan Fernandez, Ramone Moore, Jake Godino and Michael Eric. The win over UMass marked the 100th victory for the 2012 senior class.

Surprisingly after the game Fran Dunphy revealed why he isn’t a big fan of senior night.

“I am not a big proponent of senior night; it’s really difficult for me. I see Ramone Moore walk out there with his family and how proud they are of him, it’s hard,” Dunphy said. “I would rather not go through that to be honest with you, but where these guys have been and the ride they have been on has been pretty remarkable, so I am very, very, proud of them.

The Owls have a chance to clinch the school’s first outright A-10 regular season title since 2000, Saturday when they visit Fordham.