The Development Of The Real Evan Turner 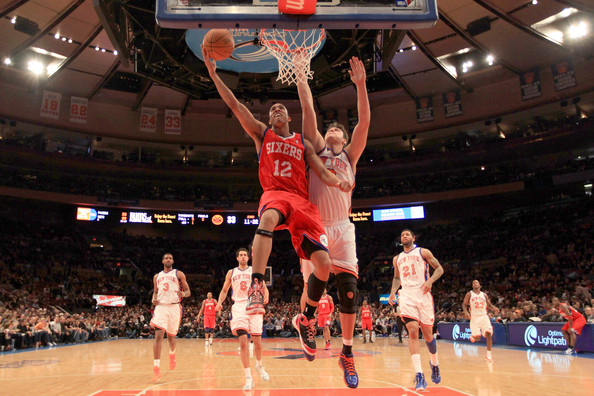 The number two pick in the draft last year has started to finally look like a number two pick. Evan Turner has stepped up in his last few games since taking over as a starter with a career high 26 points against the Celtics followed by a 16 point, 12 board and 6 assist game against the Utah Jazz.

On Sunday in a huge Atlantic Division game vs the New York Knicks, Turner dropped 24 points and added another high with 15 boards.  Yes, count em’ 15 rebounds.

Turner has helped the Sixers go on a three-game winning streak while averaging 16 points and 11 boards since becoming the starting (point) shooting guard. There are very few SG’s in the league that put up those numbers on the boards (i.e. – Durant and James). With their win Sunday at MSG the 76ers lead the Knicks by 6 ½ games while the Celtics sit 3 games back in the Atlantic Division.

I have wanted Turner to get more playing time over Jodie Meeks for some time now and happy to see it finally happening. Evan Turner could be, and should be, a player that is on this roster for years to come.  Meeks is a decent player but there is not as much value with him in the long run if his shots aren’t falling.

I feel like Evan Turner has been lacking confidence the past couple of years. At Ohio State, he was THE go-to guy and adjusting to NBA life has seemed a bit of a struggle with him. Now that coach Collins has thrown Turner into the starting lineup, I believe he is feeling more confident. I think each game will be a growing experience and that he will continuously develop as a great player in this league.

I’m still not sold Chris, but I hope you’re right.

Watched my Knicks get embarrassed yesterday. Where was Melo in the 4th quarter?? ahhhhhhhhh? Anyway This Turner kid looked pretty legit to me. He can rebound better than 80% of the centers in the league and his ball handling skills looked very impressive.

Evan has the team attacking the defense. While Jrue was dominating the ball the team turned into a passive jump shooting team. As long as Evan keeps penetrating toward the basket and avoids step back jumpers he will continue to succeed. The more he plays the more respect the officials are giving him on drives.

Eaglessuck–why are you even on here? Your obviously not an eagles fan and you just openly said “your knicks” so your not a sixers fan so kick rocks..

Chris– i dont think ET confidence has much to do with it, i think it all boils down to lack of playing time. Maybe from that his confidence has been affected.. but this kid is not short of self esteem or self confidence you can ask the coaches or his teammates.. I dont think he and Doug got along very well and i think it had alot to do with Evans attitide, i think doug didnt like how over confident ET was and is, i think ET came out of Ohio state thinking like a king bc thats what he is there and he thought the league was going to be the same and he was wrong. You have to earn respect from your coaches and your teammates… so doug keeping him out this long may have been the best decision. Evan now is playing some great basketball, hes motivated, intense and consistent since being inserted in the starting lineup.. im proud of him and i believe this kind of play will continue since this is his game..

Evan Turner is so exciting to watch, he is scratching the surface on how good he can be. He will have such an advantage over the majority of guards in the Nba, it’s scary. If he ever develops a consistant jump shot watch out. I think him a jrue can do great things together, jrue just has to keep his head in the game.

Evan Turner a star in the making…Very simple…Let him play.

D’Antoni is gone from the Knicks! What a joke of a franchise!!

NBA Rumor
Knicks to offer the house to Doug Collins to become their next Coach..

I heard that “EagleSucks” just jumped off of the Verizono Bridge…he was wearing a Mets hat…..overall it is a good day!!

LOL@greenfan! Haha!.. what a clown, he ll never show himself on here again..

Tonight has huge playoff implications with the sixers playing the pacers, both teams are almost identical difference is that the sixers have the very best overall defense in the league.. Its going to be a tough one but i still see the sixers winning.. score will be 102-82.. ET goes off again