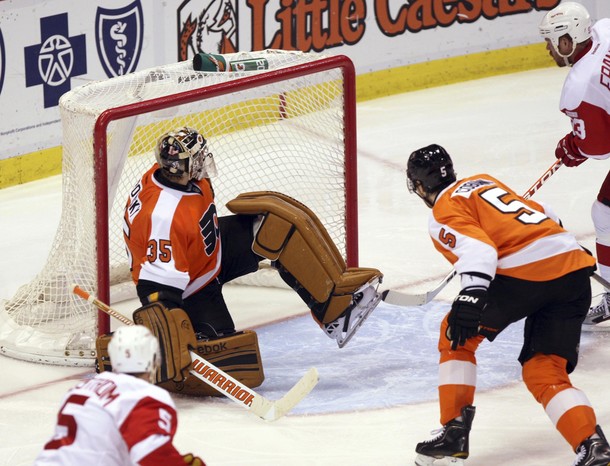 When Flyers goaltender Ilya Bryzgalov broke the franchise record for shutout minutes on Thursday evening, it seemed like an inevitability.

The goalie everyone loved to hate had shucked his loose, quirky personality for a driven, team-first demeanor and it showed in the results.

Even though the Flyers lost in a shootout to the Boston Bruins on Saturday, it’s obvious that the days when Bryzgalov’s performance were a regular question mark are behind us (for now). It’s unknown if he will start against the Pittsburgh Penguins, but logic dictates he will not only start that game but the majority of the remaining games of the 2011-12 season.

This leads me to the next question- what about Bob?

Back-up Sergei Bobrovsky has started just once in the last month, a 4-1 loss to the New Jersey Devils last Sunday. Before then, he started in the February 18 loss to the Pittsburgh Penguins, in which he was pulled after 23:00 and 3 of the Penguins’ 6 goals were scored.

Looking past this season, Bob has one year left on his current contract while Bryz has eight. With the fans finally in support of the starter, it’s time for Paul Holmgren to seriously shop the young netminder.

Hindsight is 20-20, but the moment that Bobrovsky’s career in Philadelphia became derailed was when Michael Leighton, back on the roster last season after recovering from spinal surgery, was placed on waivers.

The feeling was that Bobrovsky had earned his roster spot in spite of Leighton signed to be the starter. WhIke it was a nice sentiment, it was misguided optimism to think Bob was ready to lead to the team with less than one season under his belt.

Had the Flyers sent him down, he would have had ample time to develop in Glen Falls while retaining his waiver exemption status. Since he finished the 2010-11 season with sixty games played, the Flyers were stuck with him unless they were willing to risk losing him on the waiver wire.

I don’t believe that Bobrovsky is necessarily “ready” to be a starting goaltender, but he has improved by leaps and bounds in his puck handling abilities since last year. He is also one of the nicest, most humble people you’ll ever meet, which goes a long way in the locker room.

Last offseason was not what one would call a “goalie market.” The only team with a clear *need* for a goalie was Philadelphia. This offseason, the Tampa Bay Lightning, Toronto Maple Leafs, and Columbus Blue Jackets will all be in the market for a goaltender, and Holmgren should capitalize on it.

The Lightning are perhaps the best fit, as they currently hold the Flyers’ 2nd round pick. They re-signed 42 year-old Dwayne Roloson in the offseason following their trip to the Eastern Conference Finals, but he has not performed well this season. Roloson has an 8-13-2 record and 0.881 save percentage.

With back-up Mathieu Garon out for the remainder of the regular season with a groin injury and rookie call-up Dustin Tokarski not stepping up to the ridiculous expectation that he could save their season, the Lightning resorted to signing Sebastian Caron.

For those who don’t remember, the Flyers signed Caron at the end of the 2009-10 season when Leighton became injured (though he never played). He’s apparently become the go-to-guy for emergency “our season is tanking and we don’t trust our goalie” contracts.

Trading Bobrovsky to the Lightning for a 2nd round pick would allow the Flyers to draft a goalie for the future while giving Bob a chance to play now, which clearly isn’t going to happen unless a bizarre injury claims Bryzgalov in the offseason.

It’s unfortunate that it has come to this, but the writing is on the wall. Philadelphia has a “nyetminder,” and his name is not Sergei.

Yes, in the off season, Flyers should listen to possible offers for Bobrowsky.