Options For The Eagles 2012 Draft 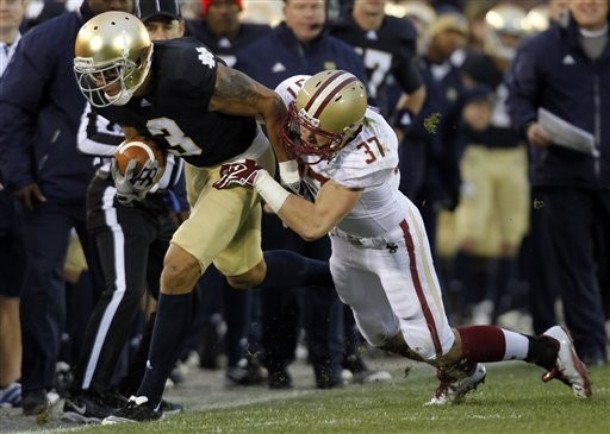 With the Eagles’ biggest question mark heading into the 2012 season answered with the acquisition of DeMeco Ryans, questions linger as to which direction the Eagles will go in April’s draft. Before the trade brought Ryans to Philadelphia, almost every mock draft had the Eagles drafting Boston College’s Luke Kuechly. Any draft that didn’t have Kuechly going number 15 to the Eagles had the Birds drafting a defensive tackle like Dontari Poe from Memphis or Fletcher Cox from Mississippi State. However, the way I look at it, the Eagles have no real need that they can fill at the 15th spot.

Defensive tackles Mike Patterson and Cullen Jenkins worked well together last season. Mike Patterson will be entering the 2012 season recovering from a brain surgery early in the offseason but all signs look promising. Cullen Jenkins is coming off a 5.5 sack season and is entering his ninth season, second in midnight green.

Behind the two starters, the Eagles aren’t exactly empty. Antonio Dixon, a talented, young run stopper will be returning from an injury. Derek Landri, currently not under contract, was a preseason stud and showed much promise in his limited action during the regular season. If no other teams swoop in, expect the Eagles to resign Landri to a minimal value deal.

With three solid options at tackle, and one waiting in the wings, the Eagles don’t have an absolute need to fill with their first round pick.

Having signed Evan Mathis on for another five years and Todd Herremans getting extended for three more years, Philadelphia will have its starting offensive line returning for next season. Arguably, the Eagles offensive line was one of the best in 2012 paving the way for LeSean McCoy’s breakout season. Having said that, the Eagles have no real need on the line except for extra depth. You don’t draft depth with a number 15 pick.

Safety is another area that many are questioning for the Eagles. Nate Allen, Kurt Coleman, and Jaiquawn Jarrett are a young corps that looks to have a promising future. It is a position that lacks a veteran presence. Drafting a rookie wouldn’t solve that issue. The only projected first round talent at safety is Mike Barron from Alabama. Since the prospect has yet to work out for NFL scouts, his draft stock is on the decline and may be falling to the back end of the first round or into the second day.

Following 2012, Michael Vick’s status with the Eagles is questionable. A quarterback could be an option at 15. But do the Eagles stretch for a Kirk Cousins or Brock Osweiler with Andrew Luck, Robert Griffin, and Ryan Tannehill likely off the board in the first five or six picks? Unlikely. With Trent Edwards, a former starter, and Mike Kafka, who is entering his third season in the system, the front office seems satisfied with their backup situation, much to the chagrin of the fans. The Eagles will look at quarterback options but not in the first round, possibly as early as the third round.

At receiver, the Eagles gave DeSean Jackson the long term contract he was seeking. With Jeremy Maclin, Jason Avant, and Riley Cooper, the receivers aren’t anything different than they were last season. Plaxico Burress and Braylon Edwards are still on the market as an option for a big receiver.

If the Eagles don’t sign one of them by the April 26th, they could use the 15th pick on a receiver like Michael Floyd, the 6’3 Notre Dame grad with a 36.5” vertical, if he lasts that long. Another option is to stretch on Georgia Tech’s Stephen Hill who stands 6’3 and runs a blazing 4.36 40-yard dash.

Wide receiver is the only realistic option I see for the Eagles in the first round. Of course, it is a sexy pick unlike a defensive tackle or an offensive lineman might be, but it is also logical. The Eagles have serious issues inside the redzone and besides handing the ball to LeSean McCoy, no receivers have stepped up to become the go-to guy in 3rd and goal situations.

All this being said, I think the Eagles will trade out of the first round and stock up in the second or pick up an extra first round pick for next year’s draft. The 15th pick could be a hot commodity for teams with bigger needs on the defensive side of the ball than the Eagles. Luke Kuechly and a wide array of defensive tackles (the draft’s deepest position) will be available at that spot.

However, the Eagles do always find ways to leave fans scratching their heads at draft picks. Maybe the front office will surprise us once again.

How to Fix the Adirondack Phantoms