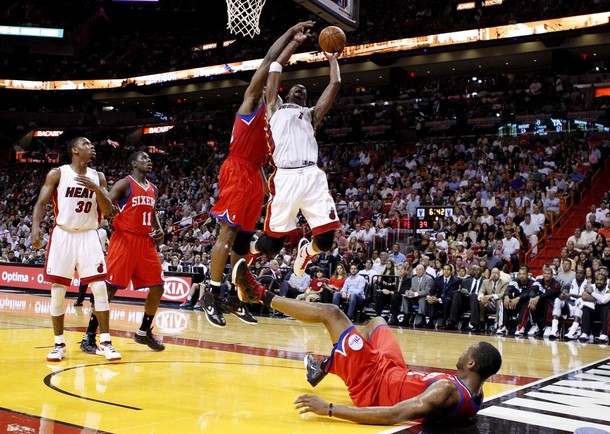 If the Sixer’s game vs the Dwyane Wade-less Heat is any indication of the playoff matchup to come, Philadelphia is looking at another early exit this postseason. The Sixer’s had 17 turnovers as LeBron scored a season high 41 points in Miami. The loss Tuesday night was the 4th of the season and the 11th in a row against the Miami Heat. The 76ers are losing games at the worst possible time, while other teams in the playoff picture are winning.

For most of the season, the Sixer’s had led the way in the Atlantic with a league leading defense and stellar fast break play. This is the team that had fought hard and won games by out hustling their opponents. Now in the final month of the season, the 76ers are looking exhausted. Guys aren’t scoring in the paint and getting to the foul line. A team that rarely turned the ball over is now giving up turnovers with sloppy play.

While the Sixer’s have gone just 4-6 in their last 10 games, the Celtics and Knicks, once just an afterthought, have both gone 7-3. The Sixer’s decision not to add a big man or a pure scorer before the deadline has resulted in an offense that just can’t seem to get going. The once hopeful number 4 seed has turned into a number 7 spot and could get even worse if the Sixer’s don’t gain some momentum.

Philly still has one game left against Boston while playing both Orlando and Indiana twice in their home stretch in what now may be must win games. They also can’t overlook teams like the Raptors or Nets like they did with the Wizards last week (even though they assured us all they would not), because every game from here on out is crucial. At this point, Sixer’s fans shouldn’t just be worried about a first round knockout against the Bulls or Heat, they should be worried about this team even getting into the playoffs.

Temple Owls Workout For The Eagles

there is over whelming evidence now that the 76ers small ball line up cannot compete against the Miami Heat, right now that is the playoff match up —– Doug Collins must not attempt it again —– Thad Young is not a capable power forward against the Miami Heat — he is too weak —and Lou Williams is too small and weak also — the eight man rotation is not strong enough ————
Brand, Hawes, Vucevic, and Allen ( 2 off these players must be in the game at all times)
Holliday, Williams, Meeks ( only one of these players can be on the floor at the same time)
Turner, Iguodala, S. Young and (T. Young only at small forward) 2 of these must be on the floor at all times
the small ball game does not work

76ers = The Bucks, Bobcats, The Raptors, Pistons and Warriors.
They do not belong on the same level for other team.
Superstars win championships. Im tired of hearing about the 2004 Pistons. They has Chauncey, Hamilton and Tyshaun Prince who played like superstars that entire year to go along with a Defensive player of the year and a hall of fame coach.

76ers score 22 points in the entire 2nd Half and only 7 in the 4th Quarter..
This is an embarrasment as a Professional NBA Team.. are you kidding me and playing against the Defensive Juggernaut that is the Toronto Raptors…
How far has this team fallen, Coach Collins has lost this Team..

Paulman your correct Doug has lost the team — Evan Turner and Nick Vuchevic look like a 2nd rounders now and Lavoy Allen doesn’t look like he belongs in the league.

Where are the 76ers bandwagon, fair weather, nitwits, Jon Hart & Schiller, to mention a few? How are your frauds, doing now? Exactly the way I told you nitwits, they would. Schill, how’s that Sam Young pick-up doing for you, with that many talents he brings to help this team get better? You’re a dope! This team is full of heartless, soft, non-scoring, non-shooting frauds! They are all trade-able, none are untouchable, & they need to overhaul this bunch of pretending dogs. As I have been saying since 2010, Stinkadala & Brand need to be GONE ASAP! They have done ZERO to upgrade this team in 3 years, ZERO! They can’t rebound, they can’t score, they don’t take the ball to the hoop, they are allergic to contact, they are one of the worst 3-point & free throw shooting teams in the NBA, they are turn over machines, & they have clearly checked out on the coach & each other. The coach is tired, checked it in, & is making all kinds of excuses, now. The teams Self professed All Star & Great player, Andre “Pete Puma” Stinkadala, is ripping the city & us fans & his own teammate, Lou Williams for only scoring & playing no defense, when he does the exact opposite. Who does this delusional piece of $#!t, joke, think he is? It’s a cruel, excruciating, blood curdling joke, of a franchise! JOKE!! Collins doesn’t play the right guys, of the very few that can be seen with any positivity. Why did he give up on Turner, although I still think he is a bust? Where is Vucevic & Allen, when they played decently, when Hawes went down? WTF, is he playing Brand so much for, when he is clearly shot? What is his infatuation with Meeks, when he clearly blows, & is not a starting NBA player? Why isn’t Thadd & Turner playing more? All valid ??? that he needs to be called on the carpet for. It’s apparently, obvious, that he knows his team sucks, & lacks talent, & is preparing for the inevitable, abrupt end of the season. They are one & done, if they even make the playoffs. Thank GOD, last night was the last game of my 10 game plan, because I won’t waste another dime, going to another game this year! Pathetically putrid bunch of soft, quitting DOGS!!! I can go around our city & pick-up 5-10 guys off the streets that can beat these BUMS, & play better, just for the love of the game! It’s sad! THORN & COLLINS, need to go, & this team needs to be overhauled. But how can they? They have ZERO trade-able pieces, horrific contracts, & there is ZERO quality free agents that are going to come here & play for this BLACK-HOLE of an organization. We will always be 3 years away, from 3 years away. BARF, BARF, BARF!!! BOOOOOOOOOOOOOOOOOOO!!!!!!!

D – he’s averaging less than 9 minutes in a whopping 8 games. I never said he’d be great even if Collins doesn’t play him. You’re such a hater. You’re the kind of philly fan that helps to make players in this town play their worst and increase the chances of failure.