Is Zac Rinaldo Too Much of a Liability for the Playoffs? 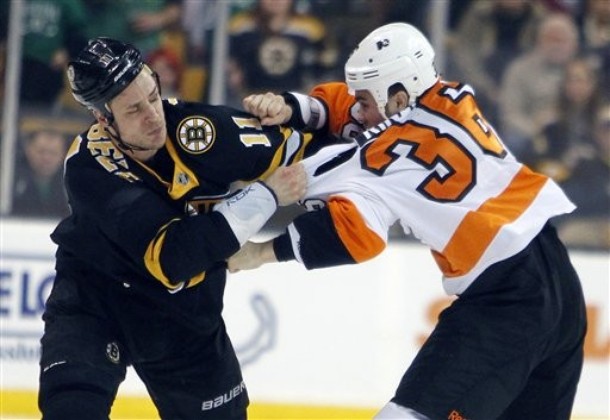 At the 11:15 mark of the first period between the Pittsburgh Penguins and the Philadelphia Flyers, Zac Rinaldo followed defenseman Zbynek Michalek behind the Penguins’ net and delivered a forceful check into the boards.

Depending on who you talk to, it was either a clean hit or one deserving of a minor penalty.

The officials saw it completely different, calling Rinaldo for a five minute major and a matching game misconduct. Removing Rinaldo from the game appeared to be a preemptive measure to keep the game under control following last Sunday’s heated contest between the two clubs.

Rinaldo’s parents, who fare from Hamilton, Ontario, traveled to Pittsburgh to see their son play. Instead, they sat through a tepid, meaningless game while their boy watched from the locker room.

For a brief period today, Rinaldo became the NHL leader in penalty minutes with 232. Derek Dorsett of the Columbus Blue Jackets overtook him this evening in an even more meaningless game between the Jackets and the New York Islanders, following a fight with Matt Martin.

A sizeable chunk of those penalty minutes were earned through fighting. According to hockeyfights.com, Rinaldo is tied for 7th in the NHL in fighting majors with 15 bouts.

Looking ahead to the Stanley Cup Quarterfinal Series with the Penguins, the need to keep Rinaldo in the line-up is becoming more and more murky.

Over the course of 65 games this season, he has tallied 2 goals and 9 points. In February, he was fined $5000 for two incidents during a 6-4 loss to the New Jersey Devils followed by a two-game suspension a week later.

In spite of the punishments and the penalty minutes, Rinaldo has been a much cleaner player than people give him credit for. He gets under his opponents’ skin well enough to draw powerplays for the Flyers while often sitting in the sin bin for questionable calls thanks to his own reputation.

As of late, Rinaldo had earned himself a spot on the Flyers’ shutdown line with fellow rookie Sean Couturier and Max Talbot (with Jake Voracek swapping in periodically). It was a position that suited his style of play, as Rinaldo is also ranked 45th in the NHL in hits with 175.  He is second on the Flyers behind Scott Hartnell and above defenseman Nicklas Grossmann.

In the line-up, Rinaldo would serve as an element to wear down the Penguins physically. The problem is that it’s unknown whether his reputation will put the Flyers at too much of a disadvantage over the course of the first round. Do you dress him knowing that he’s a physical force to be reckoned with, but may just cost the team a string of penalties, deserved or otherwise?

The secondary question is who do you replace him with?

Harry Zolnierczyk has the speed and tenacity to slide into his position along with better finishing abilities, but he has spent the last half of the season in the AHL. Zolnierczyk finished the 2011-12 NHL season with 3 goals, 6 points, 66 hits and 3 fighting majors (two of which were against Penguins players) in 37 games played with the Flyers.

To some degree, it is unfair that Rinaldo is caught in the position he’s in. On the other hand, he carved his way to the NHL by having a reputation as a fighter, agitator, and loose cannon. Had he chosen to pursue his dreams as a different style of player, he may never have made it this far, but that style usually only gets you so far to begin with.

Peter Laviolette has the tough decision to make next week of whether Rinaldo is worth the risk that it may cost his teammates. Rinaldo may have earned his spot on the roster, but there is little room for error in the NHL’s second season.

If briere, and jvr come back there may not be room for him. He has definitely had his share of bad calls, the flyers as a whole have always had their share of bad calls, and it’ll rear its ugly head thanks to pittsburghs 2 whining stars. God forbid someone checks crosby, the world will end. No matter who plays this series the pens will get some calls no other team would do to crosby. So i pesonally dont think it will matter too much if rinaldo is in or out of the lineup.
I also agree rinaldy as the anncr said yesterday, (which is the one thing i hate about playoffs, the national announcers who dont know enough bout the teams), is def cleaned up his act and is still the victim of shady calls, hopefully itll lessen as he continues to stay within the rules.

4 games to 2 in an exciting hard fought Series..