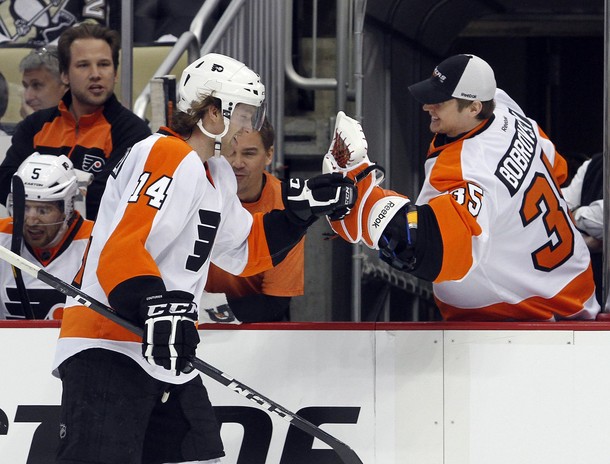 It’s becoming a cliche that the Flyers have to play from behind in order to beat the Pittsburgh Penguins this series, but as the saying goes, “if it ain’t broke, don’t fix it.”

After handing the Penguins a two goal lead early in the first period (including an embarrassingly quick goal from Sidney Crosby just 15 seconds in), the Flyers battled back to finish the game with a convincing 8-5 win at the CONSOL Energy Center.

It shouldn’t come as a surprise that thirteen goals were scored in Game 2. The Penguins and Flyers ranked 1st and 2nd in goals per game, respectively, heading into the playoffs while ranking 17th and 20th in goals against per game, respectively. They are evenly matched in talent, but character and fortitude have made the difference.

Former Penguin Max Talbot put the Flyers on the scoreboard after following Claude Giroux on a shorthanded rush and collecting the rebound. Giroux followed up a tepid performance in Game 1 with a hat trick and six points on 10 shots on goal, including a shorthanded goal of his own, a powerplay goal, and an empty net goal.

Giroux wasn’t the only Flyer to have a hat trick in Game 2, astonishingly enough. Sean Couturier, whose primary role in this series has been to shut down Art Ross trophy winner Evgeni Malkin, outdueled his opponent by leaps and bounds. He tied the game for the Flyers with 2.8 seconds left in the second period as well as 17 seconds after the Penguins took the lead again.

The Flyers took the lead for the first time in the series at the 9:31 mark of the third period, as Jaromir Jagr spun around in front of the net and beat Marc-Andre Fleury low. Jagr had been somewhat of a non-factor during the game, but the goal came at a critical junction in the game and the Flyers never looked back.

Ilya Bryzgalov stopped 23 of 28 shots while Fleury stopped just 23 of 31 shots. Two of the goals against Bryzgalov were arguably soft and could have been prevented if he had kept his stick down on the ice, but he also followed up with some miraculous, highlight reel saves. It’s difficult to say at this point if Bryzgalov is that much of an improvement over Brian Boucher and Michael Leighton from 2011, but the team doesn’t seem to be phased one way or another.

“Flower,” on the other hand, has been the worst Penguin on the ice. There’s no doubt moving forward that if the Penguins stand a chance of moving past the first round, he needs to forget his performance tonight. I don’t believe that the Flyers were in the Penguins’ “heads” after Game 1, but Fleury is going to be having nightmares until Sunday.

The officiating was suspect again in Game 2, as the Penguins received four powerplays to the Flyers’ two. Icing was consistently waved off until the waning minutes of the third period, when the referees suddenly remembered the rule and called the Flyers on it three times in a short span of time.

Game 3 opens up at the Wells Fargo Center at 3 p.m. on Sunday afternoon. The Flyers have been a better team on the road than at home this season, so it remains to be seen if they really have any kind of home ice advantage in Philadelphia.

As Dutch said in the movie “The Predator,” “If it bleeds… we can kill it.” The Penguins are hemorrhaging and the Flyers need to put them down before they have a chance to recover.

For the latest Flyers news and updates (@JoshJanet).