Is Charlie Manuel Responsible For The Bad Start? 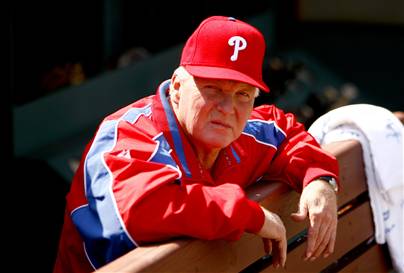 Charlie Manuel has won the the Philadelpia area its first major professional sports championship in over 25 years. Manuel’s teams have allowed him to set the record for most regular season wins by the Philadelphia Phillies in team history.

He has won more games than any manager in the 129 year history of the Fightins. With such an accomplished track record, could Manuel be largely responsible for the Phillies anemic start?  No one will ever confuse Manuel as one of the great baseball strategists. He makes glaringly obvious managerial mistakes and through all his glory, has never been recognized as a manager of the year.

In fact, through all his accolades,he has never been heralded for by winning on strategy. In his own words, he describes his successful moves with such phrases as “having a hunch” and “a gut feeling”. For the most part, he gets credit for sticking with struggling players and showing confidence in them when they are struggling.

In essence, he gets credit for being a good people person and supportive.  So what?  It can be legitimately argued that for all his glory and managing the best era of Phillies baseball, he has actually underachieved. Two years in a row, he managed a team with the best record in baseball and did not get to a World Series either year- let alone win it.

In the 2010 playoffs, he was grossly outmanaged by Bruce Bochy and in last year’s playoffs was outmanaged by Tony LaRussa. Last year, the self-proclaimed hitting guru, was unable to manufacture even one run, in a game 5, at home.

Speaking of last year, it was also Manuel who decided to play his starters in the season series finale against the Braves. The Braves needed to only win to get into the playoffs or force a playoff with the St. Louis Cardinals for the wildcard spot in the National League.

Manuel played his starters and the Phillies swept the Braves and St. Louis was in the playoffs. The rest, as they say, is history. Worth noting was that the victory in the last game of the season made Manuel the all-time winningest manager in Phillies history.

Chris Lowe once said, “Stupidity combined with arrogance and a huge ego will get you a long way”. It will also get you eliminated in the first round of the playoffs.

It is 2012 now and 16 games in and Charlie Manuel seems to resume where he left off last year. One example would be in the opening series against the Pittsburgh Pirates in the finale of the series. With the team holding a lead, and wunderkin closer Jonathon Papelbon in his bullpen to deploy, Manuel opted not to use him to get the final out in the 8th inning and then pitch the 9th inning. As a result, the bullpen blew the lead and the Phillies lost the game.

Asked why he did not use his high salaried star closer, one of the excuses given was it was only April and not necessary for such a “drastic” move in April. The very next game in the home opener at Citizens Bank Park, Manuel used Papelbon in the 9th inning of a game the Phillies were losing by several runs.

Fast forward to the series in San Francisco. With it being “only April”, Manuel found it prudent to use Cliff Lee for 10 innings in a regular season game, in April. The results, while short of disastrous but not by much, led to the Phils losing that game and worse, Lee injuring himself in the 10th inning and being placed on the disabled list.

Speaking of that game, Manuel’s “genius” was at work again. The Phillies manager cost Lee a possible win even though the left-hander pitched brilliantly. Carlos Ruiz led off the top of the 11th with a double and was sacrificed to third by Freddy Galvis. Manuel then sent Jim Thome to hit for Lee. The decision might have been a bit peculiar given Thome’s struggles to start the season but the guy does have over 600 home runs in his career. So the decision to send Thome up to pinch-hit wasn’t completely baffling-what followed was.

Giants manager Bruce Bochy replaced Romo with left-hander Javier Lopez, seemingly giving Manuel the advantage. All Manuel, who usually is a fiend when it comes to righty/lefty matchups, had to do was call back Thome and replace him with either Polanco or John Mayberry Jr., both right-handed bats. Instead, Manuel let the left-handed hitting Thome hit off Lopez, who he was 2-for-11 against lifetime. Thome struck out. Then Manuel hit Mayberry for the left-handed hitting Juan Pierre.

In case you haven’t heard Mayberry has not been hitting well and Pierre hits lefties well. Bochy replaced him with a right-hander in Clay Hensley, who forced Mayberry to ground out to end the inning. So instead of having a one-run lead and being able to go to closer Jonathan Papelbon in the 11th, Manuel brought in Antonio Bastardo, who gave up the game-winning run.  Bochy outmanaging Manuel.

What is the saying, “the more things change, the more they stay the same”?  In 16 games this season, those are just two examples of Manuel costing his team two victories. 2 out of 16 games translates to 12% of the games. That percentage over a 162 games translates to 20 games. These moves are in addition to the hitting guru managing a team that cannot hit! Things that make you go, hmm.

There was much ballyhooing about the Phillies change in approach at the plate coming into this season but it seems more like you cannot teach an old dog new tricks. And so far, if anything, the old dog is getting worse! While baseball is a long tedious season and if anything was learned from last year it is more about how the team is playing in the end then at the beginning, poor starts have haunted and cost Manuel’s teams in the past.

While Manuel is not at the plate playing the game, he has had zero impact on the players ability to hit well and it has been that way for the past couple seasons. Milt Thompson was fired as hitting coach and replaced by Greg Gross yet the same problems, even with different personnel, continue to plague this team.  There is only one holdover. He is the hitting guru. He is Charlie Manuel.

Brian Dawkins Annouces His Retirement From The NFL