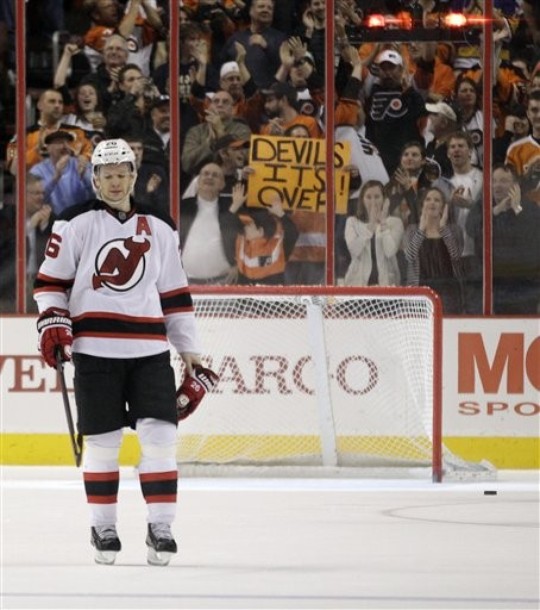 When the 2012 Stanley Cup Playoff match-ups were finally set, the majority of major media outlets predicted that the Pittsburgh Penguins would overcome the Philadelphia Flyers on their way to the Stanley Cup Finals.

As we now know, this prediction was about as sturdy as Marc-Andre Fleury.

As many pundits attempted to figure out where everything went wrong with their predictions, there were suggestions that perhaps the Penguins entered the series believing too much in the match-up on paper and the hype. When they went up 3-0 in the first period in Game One, this was what was “supposed” to happen.

Unfortunately for them, the Flyers tapped into their “comeback kids” persona and wrestled victory from defeat, against all odds. Then they did it again in Game Two.

With the Stanley Cup Semifinal series against the New Jersey Devils set to begin tomorrow at 3 p.m., though, the tables have turned.

All of ESPN’s NHL “Experts” predict that the Flyers will beat the Devils.  Just one person from Yahoo’s Puck Daddy blog believes the Devils will win (in seven games).

Not only that, but with the time off between rounds, every major news outlet has devoted time to asking the question, “Is Claude Giroux the best player in the world?”

Giroux may be a fairly grounded player, but there should be concern that both he and this team could fall into the same trap of believing they’ve already won this series without putting in the do-or-die effort necessary to actually win it.

The Flyers and Devils split their season series, but the game that the team should be re-watching before tomorrow’s puck drop is the February 4 loss in which the Flyers found themselves down 6-0 heading into the third period. It was an embarrassing game to watch, even with the Flyers scoring four unanswered goals in the third period.

Sergei Bobrovsky was in net for all six goals against, but the Flyers in front of him were just as responsible (if not more so) for the lopsided score. The Devils are a dangerous team if you give them space to work with.

If you toss out the numbers from the Philadelphia-Pittsburgh series, the Devils ranked 4th in goals per game among the remaining 14 teams in the playoffs.

Unlike the Penguins, their offense is scattered much more evenly among their lines that shutting them down won’t be as simple as “put Sean Couturier on Travis Zajac.” It will require team-wide defense to contain the likes of Zach Parise, Ilya Kovalchuk, Adam Henrique, David Clarkson and Alexei Ponikarovsky (the only Devil to score against Ilya Bryzgalov this season).

At the other end of the ice, Martin Brodeur may not be the young man he used to be, but he’s the winningest goalie of all time for a reason; he knows what he’s doing. He’s not going to let in the soft goals that escaped Fleury like beach balls.

It all comes down to being prepared and avoiding expectations. The Flyers can certainly win this series, but if they believe they’ve already won, then they’ve already lost.

Preview Of The Upcoming Sixers-Bulls Series

This is the round bryzgalov gets his game going. Slow starts are a thing of the past now. Go flyers