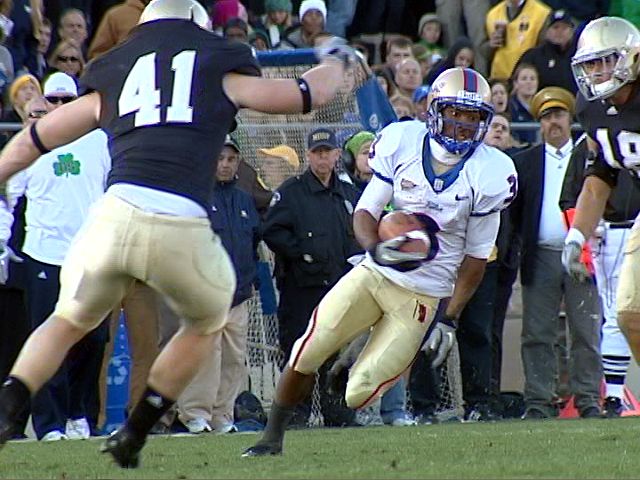 I’ll bet you that the guy which Andy Reid and Marty Mornhinweg are most eager to get their hands on is Tulsa rookie free agent, Damaris Johnson.  If this young man can decipher the offense and he’s got a lot to learn, he could be a great weapon for the Birds.

The reason I say he’s got a lot to learn because he must learn every position on the offense because they’ll want to line him up at all of them.  They’ll want to throw him in there in the way they use current Eagles wide receiver Chad Hall.  He’s a mismatch waiting to happen.

When Reid and Mornhinweg would send him into the game, they would wait and see how the defense would respond to him.

Will the defense considered him a running back or a receiver?  If they consider him a running back then the Eagles spread him out and get the match up they want with a linebacker or safety trying to cover him.  If they consider him a wide receiver, then he shifts back into the backfield and they run the ball against a cornerback-heavy nickel defense.

The Eagles did this a while with Brian Westbrook and had a great deal of success with the concept.

Unlike Hall who is no speedster, Johnson is faster. He set the NCAA record for All-Purpose yardage in a career during his freshman, sophomore and junior years at Tulsa. He does it all; wide receiver, running back, punt returner, kick off returner

He didn’t play his senior year because he was convicted of felony embezzlement because his girlfriend, who worked at a Macy’s in Tulsa, rang up $2800 worth of merchandise and charged him only $13 for it.  Johnson was suspended for the 2011 season after pleading guilty to the charge and receiving a deferred sentence.

I see they have him listed at 5’7″ 171 pounds.  I hope he’s bigger than that or he’ll have trouble taking the pounding.  Hopefully he’s been working out during his year off.

Eagles Have To Hope Their Safeties Hold Up

Hanson Will Have His Hands Full Holding Off Brandon Boykin

G:
Did he do any extra time for stupidity? “Sure, they’ll never notice that transaction honey. 50 inch LED TV, surround sound/DVD system, and a riding mower for $13.00. It’s a cinch.” How deep into a playbook can THIS kid get?

I heard they signed him to work as an Intern with Howie Roseman and Joe Banner in “Salary Cap Management” once he’s released, of his football duties

Well back to talking football instead throwing rocks at peoples glass houses, I hope the Eagles works him in slowly. No need to throw the book at him (no pun intended) all at one time. Allow him to soak it up at the rate he is capable of processing the info so he can function on the field as if it’s second nature. That will be the key to his success on the field. Off the field that’s between him and his family.

paulman he is too tall for Joe and Howie internship

Hes like a fake percy harvin.. I do enjoy the speed but hes so small. Guys say Desean is small, well this guy dwaves him and thats obviously saying alot. Im willing to see what this guy has in camp though. Bring him in and we’ll see whats what..
Ps- that was an horrid youtube video, they couldnt get a better one? I hope they didnt think those were highlights, more like lowlights.

that was just one game .. everytime he touched the ball. he’ll beat out chad hall easy..

Character issues don’t really matter with this kid. They have nothing invested in him. He’s a UDFA & they can simply cut him, if he is worthless. If he shows promise & maturity, he’ll make the practice squad. Since the rosters have been expanded by 10 this year, he quite possibly can make the roster. If not we have the practice squad. So it’s a win, win situation for the Eagles. IMHO, not only did they have a good draft, they signed some pretty quality UDFA’s. Can’t wait to go to Lehigh with my 2 Boys & Nephews. Gonna be fun again, to watch this year.

hey Dcar the active roster is expanded by 10 or the practice squad? that would be cool if we could dress more on game day.

All i can say this year is that i was very pleased with the draft, it had to be the best one i seen on this current squad. Im not going to bitch about anything from here on out. Its time to make it happen on the field, i dont any predictions show me… Im asking some of you to join me in just saying positive things about this team. we already know the negitive crap and have been busting our brains talking about the same shit and becoming NEG-ADELPHIA at the same time. Lets just cheer our guys real hard when they win and pat them on the back when they lose and i would bet anything they would play harder. As fans we are tougher than some of the players mentaly so lets not help put them in a hole with the trash talking. LETS SAVE ALL THAT FOR DALLAS , NY AND WASHINGTON.. I just want to see these guys get at it..

scramz – they expanded the offseason roster from 80 to 90.. so you can carry 10 extra players through the offseason..

I had no idea who this guy was until this post came up. Watched the youtube videos…might be one of the smallest football players I have ever seen but lil dude is FAST…anybody know his 40? His height could come to his advantage at times if he makes it on the field since the opposing D won’t be able to spot him half the time. I would really like to have a burner like this at our 5 spot WR..create an instant mismatch..It will also be hard for a D player to blast this kid since he seems to know how to run low and get down as soon as the hit is coming.

Dcar Im with you on that. I could care less what this dude did or any eagle did for that matter off the field..they are not suppose to be role models. At least not to me…If they get us closer on the field to winning a SB thats fine for me

Last year’s Roster’s was reduced to 80 Player Maximum due to the Lockout and loss of OTA’s and a shortened Summer Camp.I believe it’s been a 90 Player Maximum Roster for a few years now that a Team can carry (outside of last Season that is)

The Eagles should take a gander at Jacoby Jones…proven returner that’s made a few nice plays at WR while with the Texans. He’s a better natural receiver than Cooper and is probably a step or two faster than Avant. They still should grab Burress as well. Jackson, Maclin, Burress, Jones, Avant and Cooper or McNutt.

The thing is if one or both the #1 and #2 are out for any length of time do you really want to rely on the tandem of Avant and Cooper again?

Avant is pretty good ,strong but slow, quick off the line though.. cooper needs to learn how to play relaxed.. all that size what a waste ..he is horrbile at jump balls.. and he doesnt have bad speed for his size but he plays like a small guy.. i think mcnutt can come right in and play.. he plays relaxed smooth great hands strong and has long speed.. short speed isnt too good though.. damaris johnson is very tough for his size and plays with abandonment..

larrwd- im not sold on this WR squad. Avant did not show much last year and cooper has not made the most of his chances. i want 1 more in here to push for time.

@Stevo…..I agree with you on Cooper…he has been given a fair shot and hasn’t produced.

Would you look to sign Plax to a 1-year deal??

A brief comment on his legal issue. My parents live next to the GM of a huge department store. When they hire new people, they take them out on the floor to a register station, and point out the cameras that are on them at all times. He tells them “Don’t play games with the register, we are watching, we will see it, and you will leave in handcuffs, period” They still have a bunch of employees leaving to get locked up month after month for doing the exact same thing they were warned about. Apparently his girlfriend did not get the message either. Dumb.

I’d also agree, Cooper should have to fight for his spot this year. His personal qb just had a try out with the Bills, he needs to make good plays using his size with the varsity this year or somebody else will take his locker. A 3rd year player has to be solid, no more time for growth.

Can he play Safety?

They are not going to waste $$$, nor a roster spot, on Burress! Get it through your thick, rock heads. At this point in his career, he is a situational WR, that CAN’T play special teams. So AGAIN, you don’t waste $$$, on a luxury, situational WR, who will be our 5th WR, at best. WE DON’T NEED HIM!