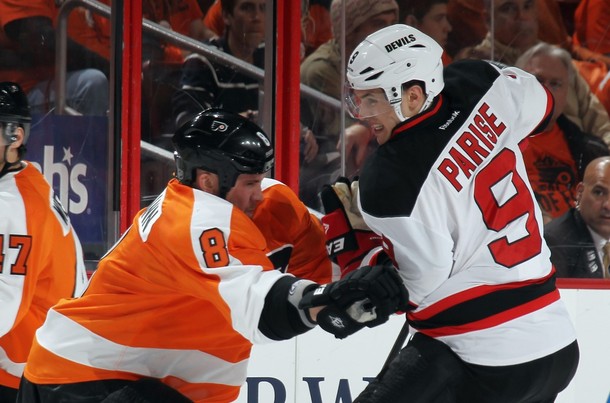 Aside from Peter Laviolette screaming at his players that they need more “jam,” the Philadelphia Flyers need to address their lack of offensive effort in Game Two of the Stanley Cup Semifinals against the New Jersey Devils before the puck drops for Game Three.

The team found themselves pressed in the defensive zone for nearly the entirety of the second period in Game Two, and were unable to generate much offense as a result.

I wish I could say that I did research to solve the conundrum of how to address this issue, but Eric T. of Flyers blog Broad Street Hockey raised several points via twitter that would suggest which adjustments could be made to better prepare the team for success in Game Three.

For starters, the top two defensive pairings need to be broken up.

Braydon Coburn had been paired with Kimmo Timonen on the blue line since the 2008 Stanley Cup playoffs, but Laviolette opted to pair Coburn, a shutdown defenseman, with fellow shutdown defenseman Nicklas Grossman for the 2012 playoffs. The pair worked well against Pittsburgh (before Grossmann received a head injury), but combining the two limits the offense that can be generated from the blue line.

Since the Devils don’t pack as concentrated of an offensive threat as Pittsburgh, there is less need to concentrate specific skill sets at specific lines. Instead, the Flyers should try to balance their blue line usage by reverting back to their former pairing of Coburn and Timonen, another elite puck moving defenseman.

The other adjustment that could be made is moving Eric Wellwood up to Danny Briere’s line. I like the idea of having either James van Riemsdyk or Wayne Simmonds on Danny’s line to provide a big body in front of the net, but the defensive liability of this line was exposed on Tuesday. Wellwood played the least amount of minutes among all forwards, but was phenomenal on the ice at forechecking and applying pressure in the Devils’ zone.

As a defensive-minded forward, Wellwood also provides some added coverage to help make up for any of Briere’s shortcomings.

If Wellwood moved up, JVR would move down to the shutdown line with Max Talbot and Sean Couturier. Simmonds would remain on the “fourth line” with Brayden Schenn and Matt Read.

Laviolette may choose to give his players the benefit of the doubt tomorrow by relying on them to just play better, but the Flyers can’t afford to lose in Newark. In spite of the main stream media unanimously predicting the Devils will lose, they are very capable of winning this series and need to be matched properly if the Flyers are to move on.

Junior Seau Suicide Is Another Tragic Event For NFL