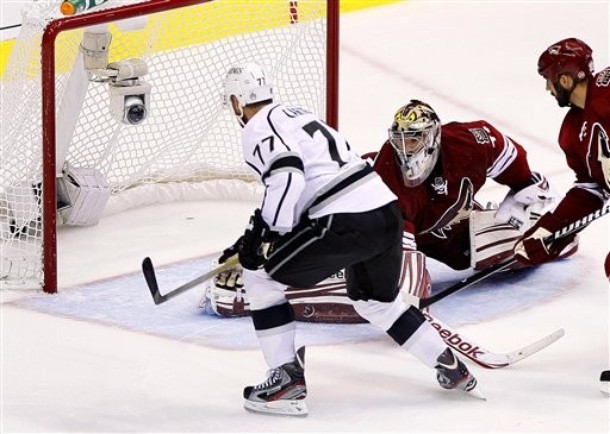 Sure Mike Richards and Jeff Carter may get the last laugh this year, but they are no more than rooks in Jonathon Quick’s game of chess. Not unlike the New York Rangers, the Los Angeles Kings success can be heavily weighted upon the shoulders of the soon-to-be starting goalie for team USA next Olympics. After shutting out the measly Coyotes last night, Quick earned his second shutout in the playoffs and his seventh straight road win.

Carter put in a hat-trick during the Kings 4-0 dismantling of the Coyotes and for the first time in ten games became relevant in the playoffs. The Flyers got Jakub Vorachek and the 8th overall pick which they used to pick up Sean Couturier along with a future third round pick in return for the winger. Couts proved he is the two-way forward everyone was hoping on the Flyers penalty kill this season, but really made a name for himself when he shut down an aggravated Evgeni Malkin in the first round of the playoffs.

Yes, Carter and the Kings are probably going to beat Phoenix and head to the Stanley Cup finals, but the forward who has trouble finding the net can kiss his days playing on first lines goodbye. On the other hand, Couturier has nowhere to go but up from here and Vorachek has proved to be a timely Johnny-on-the-spot seemingly getting forgotten in defenses’ shut down Giroux schemes.

Mike Richards was a solid player, he led by example but was not the guy Laviolette wanted wearing the C in his locker room. The Flyers received Wayne Simmonds and Brayden Schenn in return for the former first round pick. Schenn was regarded as the best prospect to never play in the NHL prior to start of the season and has played a hard-nosed style of play that at age 20 has already been able to get into the heads of some of hockey’s premier superstars. Simmonds is a hard working player living up to the Broad Street Bully mentality and never hesitating to drop the gloves. But don’t forget the 23-year-old netted 28 goals, a career high, this season.

Richards and Carter are solid players and their success is because of many variables. The West plays a less physical game than the Eastern Conference, the two forwards can hold the puck in the neutral zone without immediately having a shoulder pound into their chests. Since the Kings have ample talent on their first line, Anze Kopitar and Dustin Brown, the former Flyers are playing on Los Angeles’ second line. This means they are not matching up against the top two defenders like they had been in Philly, which frees up space in the slot and lets them use their natural talent to work the cycle.

Richards and Carter have been best friends since coming up through Philadelphia’s system together and LA gives them the freedom to snort whatever they’d like and party as much as they want after games. Philly wasn’t the city for these two forwards and a change was necessary. They weren’t the role models Laviolette was looking for and it may not be apparent this year but the trades will work out for the Flyers by the end of Schenn and Couts’ tenures in Philadelphia.

Report: Eagles To Reduce Jason Peters Salary Due To Injury