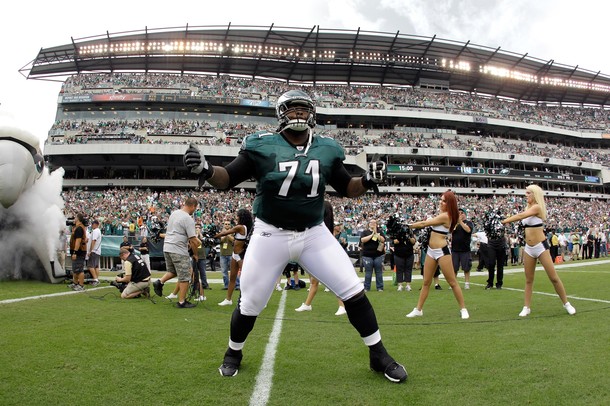 I’m sure you’ve heard about Eagles Pro Bowl left tackle Jason Peters re-repturing his Achilles tendon.  Not only will this injury delay Peters recovery for three weeks, it could also threaten his career.

Jeff McLane of Philly.com quotes a foot and ankle specialist about the trouble Peters could encounter due to the second injury.

“It’s going to make the road to recovery that much more difficult,” said Phillip Kwong, a foot and ankle surgeon at Kerlan-Jobe Orthopedic Clinic in Los Angeles. “It’s not as clear-cut as the first time. Whatever he had the first time he’s added another obstacle.”

The Eagles were holding out hope that Peters would be able to return to action late in the season, but there’s little to no chance of that happening any more.

Derrick Gunn of Comcast Sportsnet was the first to report this incident.   Peters’ Roll-A-Bout vehicle, which is a substitute for crutches, malfunctioned and it caused Peters to tear the tendon again.  The Pro Bowler, whom many believe is the best in the NFL, was doing something in his kitchen when this incident occurred.

It was March 27th when Peters had the initial injury.  Now he must start his rehabilitation again and he plans on suing the company that makes the Roll-A-Bout device.  That company had better hope that Peters recovers and plays again.  If he doesn’t Peters will be making just as much money from them.

There was ZERO chance, that a 340+ lb O-lineman, with a torn achilles, would be back within a year, anyways. For anyone who had that train of thought, was flat out delusional & in a state of idiocy. By the time he is ready to even do activities, he will be pushing close to 400lbs. It’s inevitable with the inactivity, depression, change of life style, & his body type, that he beefs up. Even when/ if he is cleared to resume his career, I can almost guarantee, it won’t be here. Especially with the fragility of this injury & his salary. It’s ashame, but his career here is over, maybe all together. Bell better come with his big boy shoes on, & ready to play. I tell you what, he better, because if he stinks up the joint, or gets hurt, Vick better up his medical & life insurance’s, because we have ZERO viable, able backups. DON’T EVEN ATTEMPT, TO SAY KING “AIN’T” DUNCRAP. He is a giant, useless, Matador.

A damn shame, no doubt.. Peters was in excellent shape last year I thought, and I believe he had every intention of trying to return by late Novemeber of 2012 Season which is now out of the question with this 2nd incident/tear.. Peters is in his prime age wise and knows that missing too much time as a OL can become an out of sight, out of mind type of thing and means no guarantee of a starters spot a year later.. Peters was the heart and soul of that OL Group and now the other Starters are going to have to pick up the slack in which Kelce & Herremans and Mathis should have no problem in doing..

**Just reported on ESPN & WIP** Peters & Suggs, won’t be getting paid, because their injuries were off-season, non-work related injuries. THAT SUCKS!! $7.5M, less for Peters. DAMN, THAT SUCKS! OH WELL, more $$$ for the bean counters. They better redo Shady & Maclin now. NO EXCUSES!!!

Not so fas DCar
The new CBA allows Team to not have to pay if Players are injured in off-season workouts that are not under Team facilities and Team watch, but the Teams can still decide to pay and in Peters/Suggs situations, I would expect both Organizations to pay these players since they are in good standing and would most likely return playing in 2013.. Now an older player at the end of his career or a 3rd Stringer would proabably receive a medical buyout
You many want to re-read the entire article .. thnx

Dcar…I he had insurance. Most players do.

On the side…as I’ve stated before….only about 2/3 of NFL players ever make it back to the league from achilles’ ruptures…and of those, most at a recuded role/effectiveness.

Its one of the reasons why I am cautiously optimistic about Rolle. ALso why I think its game over for Peters. At least with the Eagles.

No kidding Paul. I said that, just omitted the CBA part. If you think they are going to pay him, possibly 2 years salary, including $7.5M this year, your BONKERS!!! BTW, he ain’t coming back & I just reported what ESPN & WIP reported, I didn’t read it in an article. Damn it, let me take credit, for reporting something for a change. You jealous hog you. LMFBO!!! 😀

Just reported, DCar is out of his medication again, please stay alert…ha ha
i am sure they will work out something and I agree.. He still is only 29-30 years old and has a good 4-5 years of football left.. I believe Vinnie meant to say
cautiously optimistic about OT Demetress Bell and not LB Rolle but with Vinnie being Canadien, I bet he just woke up and didn’t have his Coffee and Labatts yet ….(not to generalize about the Canadiens)

Apparently the 2nd injury was an issue with the device to help move him around while recovering fro mhis initial surgery, so lawsuits will be flying around by Peters and possibly the Eagles…

I love Labatt blue beer. So unfortunate for Peters. I wish him well and hope the 2nd rd of surgery is successful. But I still feel confident about our line. Bell should be solid at left tackle. He’s young and will get a ton of schooling from Mudd. But definitely can’t afford to lose anymore lineman or else we will be screwed.

Labatt’s Blue on Tap, in a Frosty Mug served by a big-boobed blonde sounds great about now…..

BEER, BLONDE BOOBIES, GOOD, Hells to the YEAH!!! Paul, lend me some of your meds. Maybe Vinnie can send me some from Canada, they are alot cheaper there. XD