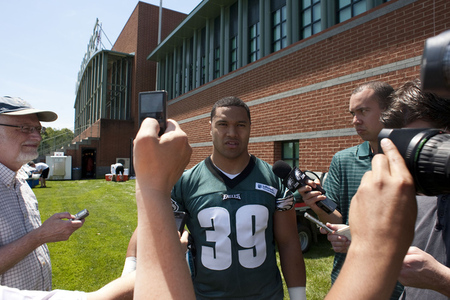 Get used to hearing the name of second-year fullback Stanley Havili because there’s a good chance he’ll be starting for the Birds this season.

I could see immediately when I took a close look at the Eagles on the field for this past weekend’s rookie mini-camp that Havili had been working hard this off season.  He looked much bigger and stronger.  The youngster looks like he has added 10-15 pounds in his arms, chest and legs.

Number 39 has very good speed for a fullback and he has the ability to catch the football.  It’s no secret that Eagles head coach Andy Reid would like to have fullback with the capabilities of Leonard Weaver who was forced to retire due to a severe knee injury.

When asked by the gathered media whether Havili was the starting fullback, Reid said, “Yes”.

Like former Eagles running back Leonard Weaver, Havili has the ability to make things happen as a runner and pass receiver, so he comes into camp as the guy to beat in the fullback competition.  During his college years at USC, he was quite a weapon both as a runner and a pass receiver.  Reid and his coaches know what Havili is capable of.

Rookie free agents Emi Igwenagu and Jeremy Stewart are his competition at the position.

He’s got a great chance to be another weapon in what could be an outstanding offense and that’s quite a promotion for Havili, who spent the entire 2011 season on the practice squad.

Last year’s fullback Owen Schmitt Reid wasn’t much of a ball carrier or pass catcher, so Reid and offensive coordinator Marty Mornhinweg are looking to improve the offense in that area.  They want the type of fullback which Havilli was in college.  Weaver was such a good ball carrier that he was looked on as a backup running back, Havili has that potential.

In his first year, Havili had trouble blocking all the big NFL players linebackers and defensive linemen.  Now with his additional size, he should be able to do the job a lot easier.

Sixers-Celtics: I’m Going To Need Some Tums Before It’s Over

I like this kid. They need to give him a good shot, because mostly all Tongan & Samoan players are strong, hard-nosed, beasts. He has, gotten bigger & IMHO, he will be a good fullback. The early signs of this team, has been all positive thus far, this off-season, so let’s hope it continues throughout the season. I’d be happier & more comfortable, if we had a veteran SS to go along with the kids, but I guess we ain’t going to sign my touted boy Bell, so I guess I’m going to have to give up on that one, unless he is a camp signing. We’ll see.

Do not count out Undrafted Free Agent Emil Igwenagu from U Mass, at 6-1 249lbs he’s a load who specializes in blocking and can also split out wide as a TE/HB.. I expect him to have a great camp and compete for the FB Spot with Havilli.. Igwenagu measurables were off the charts and is a real athlete and from all reports is a ver bright kid.. If he can pick up the system he has a real chance of making the 53 Man Roster..

Emi Igwenagu, is my choice to win this job. We are here on this one Paul. I haven’t seen his 40 time. Is he faster than Havili is Paul? I do know that Stewart, is as big as Emi Igwenagu, but he is faster than both of them. Good competition. Havili, may have an advantage because he already knows the system though. But at some point during the season, I expect Emi Igwenagu, to take over. What do you think?

Havilli definitely has the inside track due to him being in the Eagles System for a Season.. If Igwenagu has a great camp (which I believe he does) then the Eagles could do 1 of 2 things,,,
Keep Havilli at FB and have Igwenagu on Practice Squad
or If Eagles have any issues at RB due to Injury or Holdout, then i could see Havilli maybe being that big RB and let’s say the Eagles go with a RB Corp of McCoy,Brown and Havilli as their RB’s and then Igwenagu could make it as the FB
I think at this time, it’s Havilli’s position to use but I am still not sold on him as a big time blocker though everyone says he has worked hard to improve so we will see, most observors already know that Igwenagu can block but I think the Eagles coaches will be surprised how athletic he is for his size and the fact that he has very good hands out of th back which is a must to play in the Eagles System..Igwenagu caught over 70 passes while at U-Mass, he does lack straight ahead speed, and ran in a a 4.65 range I believe, but his high jump,broad jump and lifting lead all combine participants from the FB position..

Paul, don’t discount Jeremy Stewart either. If Havili doesn’t play well , he could be out of the picture all together, because I don’t think he figures into the RB situation at all. McCoy, Lewis, and Brown are my choices, w/ Chris Polk on the practice squad, and Emi Igwenagu, a surprise starter, w/ Jeremy Stewart, who can block as well as run, and catch on the practice squad; and is much bigger than Havili. He isn’t going to be given anything, because he does have some real competition. His year in the system is his ONLY advantage to me. What do you think Pauman?

At RB, my thoughts are that McCoy and Brown are locks
I am not sold on Deon Lewis or Chris Polk staying healthy to play and could see where Lewis is the 3rd Down Bac and Polk makes practice squad, but if Polk stays helathy and has a great camp, I could see him overtaking Deon Lewis as that change of pace, 3rd Down back.. If Lewis does not contribute on SPecial teams then I feel there is no real reason to have him on the 53man Roster.. So if the Eagles go with another player as a Kick Returner which I believe they will, then Lewis to me becomes the odd-man out if all remain healthy that is..
J Stewart is 6-1 218lbs which is way to small to be a legitimate FB in the NFL, he’s a camp body if nothing else and possibly could see some reps at RB as the “Big Back” if McCoy were to hold out and Brown was injured
I don’t see much of a future with him as Igwenagu & Havilli

I bet they don’t carry a FB. And folks, Polk WILL NOT LAST on a practice squad. Don’t get fooled into thinking that where a player did or didn’t get drafted translates directly into how teams value him. The draft is like an auction. If you think something is worth 1 mill, but you can get it in an auction for 8,000 because nobody else is willing to bid higher, that doesn’t mean that you consider the thing worth 8,000, you still consider it worth 1 mil.

Problem with Polk is that he can’t seem to stay healthy, many observors feel has has had so many carries in his Collegiate Career then his upside or ability to stay healthy is not very good which seems to happen to many Top College RB’s who are 2-3 Starters as a #1 RB at a Power Conference College.. You only have so many carries in that body…..
If is can stay and prove to be heathy, then Polk beats out Deon Lewis no doubt.. If he can’t stay helathy, he gets released… I like this Bryce brown and think he has a bright future..

I’d rather keep Dion Lewis as my 3rd down back than Polk for the reasons you mentioned Paul. He also had a problem holding on to the ball at times during critical stretches of his games. Lewis does have that talent to contribute. I see our RB’s as McCoy, Brown, Lewis, and Polk on the PS. If he is snatched up so be it.

Lewis definintely has some upside,but needs a big camp or will be another small scat back in a long-line of RB’s who have never amounted to much with the Eagles .. ( Ryan Moats, Tony Hunt, Lorenzo Booker, etc,etc)

I stay awy from 3-4 year RB’s from a Big Conferences where the RB had moe than 400-450 Carries during their College Career’s for it appears their NFL Pro Days are limited since their bodies are beat up already… Give my a 2 year COllege Players with no more that 200-250 Carries and these are the RB’s that can give you 4-5 Good Seasons at the NFL Level.. That’s just me though..

i get it, and I agree somewhat.

Hey Gmcliff, I was dead-on about the extension amount for RB L McCoy… Paulman is having a very good off-season too….. When can I join your club..

You have always been the man in my eyes Paul……….GMCliff views Paulman as KING on this website. I just try to do my best to compliment you my friend.

LeSean McCoy, is the man. This had to get done. I think the Eagles realized they don’t need anymore distractions on the team; they will do the same thing with Maclin as well, thats why you won’t see money wasted on Plaxico Burress, and McNutt will make this team, along with Riley Cooper as red zone options, and Demarius Johnson as our KR/PR option – I know we disagree Paul, much love anyway – but taking care of our in house is future is smart.

You do a great job yourself Gmcliff (except for the Albert Haynesworth talk… ha ha ) The 5th WR/KR position is going to be fun to watch in Camp and may the best player win, At least this Season, it appears the Eagles have some athletic,talented players to compete and choose from as in past years..
I expect the Eagles to extend Maclin sometime early in the Season on his deal and think he will get a similar deal that McCoy just signed.. a 4 year around that $40 Million mark with $12-$15 in Guaranteed $$$ over the Deal..

Thanks Paul!! But don’t laugh at Haynesworth, because if Patterson can’t go, and the Eagles buy him out…..that leaves Jenkins, Dixon, Landri, and Thornton, and Cox, will shuffle between DE, and DT, and if one of them gets hurt, don’t be surprised if he gets a call………NOT AS FAR FETCHED AS SOME WOULD LIKE.