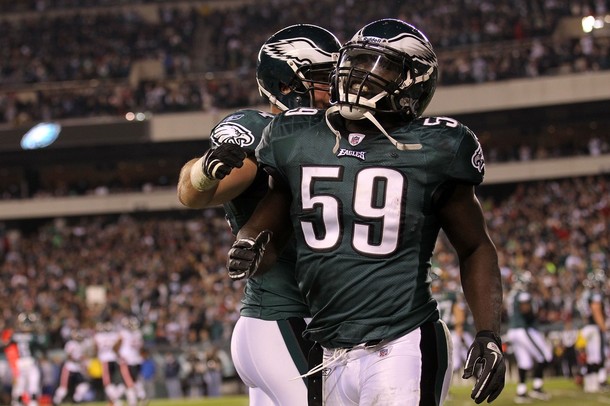 Throughout the Andy Reid era, the Eagles have always seemed to not place a high priority on the linebacker positions. That mindset has changed this year with the trade for former Pro-Bowl linebacker DeMeco Ryans, and the drafting of Mychal Kendricks in the second round. The emphasis on improving the unit represents a significant shift in philosophy for the Eagles.

With the addition of DeMeco Ryans the Eagles clearly have learned the value in the middle linebacker position. DeMeco could possibly be the sleeper addition to make this one of the most feared defenses in the league.Although he has struggled in a new defensive scheme a year ago, he is now more than a year removed from his Achillies injury, and should prove to be a force that will wreak havoc in the backfield, as well as provide some leadership and personality that this defense has sorely missed.

The outside linebacker positions will both be up for grabs over the summer. Rookie Mychal Kendricks figures to be the favorite to start at the SAM position. One word describes and that is Athleteic. He ran a 4.47 40-yard dash at this year’s combine, hopefully this translates into him being a ball-hawking linebacker who can play sideline to sideline. He’ll be a force against the run, and effective in blitz packages, but it remains to be seen whether the young linebacker can cover the tight end. Jamar Chaney will be the top competition for Kendricks. The Eagles wanted Chaney to play the SAM position a year ago, but the ineffectiveness of Casey Matthews forced him to move back to the MIKE after only two games.

The weakside linebacker is also an open competition. Brian Rolle and Casey Matthews are the early favorites, with former fourth round pick Keenan Clayton also in the mix. Rolle proved a year ago that he could be a serviceable NFL linebacker, and was the lone bright spot in the linebacking corp. last season. Matthews got opportunities to start at all three positions a year ago, but failed miserably at each. To his credit, he managed to work his way into an effective role within the nickel package at the end of the year. The coaching staff seems to be high on him.

Keenan Clayton, Akeem Jordan, and Mosies Fokou will battle for the final roster spots. Clayton is the only linebacker on the roster that hasn’t received an opportunity to start, he has great speed but hasn’t been able to earn the trust of the coaching staff in two seasons. Jordan and Fokou have both received multiple starting opportunities, and have been mediocre.

The Greatest Game We Never Saw