Sixers Stun Boston To Even Series 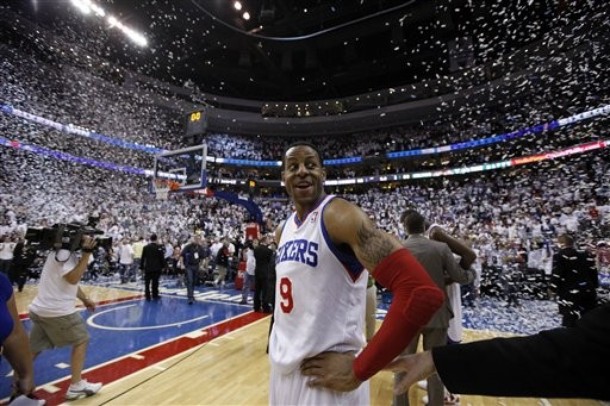 On Friday night, the Philadelphia 76ers evened their series with the Boston Celtics thanks to a 92-83 victory. The Sixers began the game in a 14-0 hole, and scored just 31 points in the first half, trailing the Celtics by 15. In the second half, the team played as though their season was on the line, and outscored the Celtics 61-37 in the final two quarters.

The first half of this game was filled with some of worst basketball the Sixers have played all year. They were sloppy, clumsy, and couldn’t seem to get anything right on either end of the court. The team went scoreless in their first six possessions, while Boston scored on six of their first seven.

Give Doug Collins and his team a lot of credit. After getting blown away in Game 3, it would have been easy for the Sixers to give in to Boston, and allow them to coast to an easy victory. However, the Sixers were never willing to accept a blowout like they did in the previous game. They continued to play hard on the defensive end, and finished the game with 17 forced turnovers, which played a significant role in their comeback.

Elton Brand only played about 15 minutes, but he still played an important role in sparking the Sixer comeback. The power forward picked up a technical foul early in the third period that seemed to light a fire under his teammates. After the foul, Philadelphia went on a 10-0 run to cut the lead to five, capped by a jump shot from the free throw line by Brand, who then exited the game for the remainder of the night.

After the 10-0 run, it was time for Lou Williams to shine. The Sixth Man of the Year candidate had been inconsistent, and hurt the team by taking a number of ill-advised shots in the series, but tonight Lou was at his best, delivering 15 points off of the bench. There were several times in the third quarter where the Celtics attempted to regain control of the game, but each time Williams was there to answer with some big shots, and a couple of three-point plays.

Another player that played an important role tonight was reserve shooting guard Jodie Meeks. Meeks made the most of his minutes tonight, scoring nine points off of the bench (including a three in the fourth quarter to give the team their first lead of the game), but he also played a key role on the defensive end. Meeks had some very active hands on defense, and several times broke up passes that led to turnovers, and also came up with a big steal that led to a layup for himself late in the game.

But perhaps most impressive of all was none other than Andre Iguodala. The veteran has received much well-deserved criticism over the years, but he’s been clutch and fantastic in these playoffs. He scored 16 points tonight, hit all three of his three-point attempts, including a dagger at the end of the game to point the Sixers up five with less than a minute to go. As a caller to Sports Radio 94 WIP said this week, the world is upside down right now; the Phillies are in the last place, the Flyers are out of the playoffs, the Eagles are drafting well, and Andre Iguodala is coming up big in clutch moments.

Now for the reality check. As exciting and thrilling as this victory was, the Sixers must realize how fortunate they were that Boston took their foot off of the gas once the second quarter buzzer sounded. The Celtics have shown that when they decide to flip the switch, they’re too much for the Sixers to handle. It’s still going to be very difficult for the Sixers to win this series, but they’ve got a lot of fight left in them, and they’ll give the Celtics all they can handle in the final games of the series.

Notes From Phillies’ 6-4 Victory Over Boston