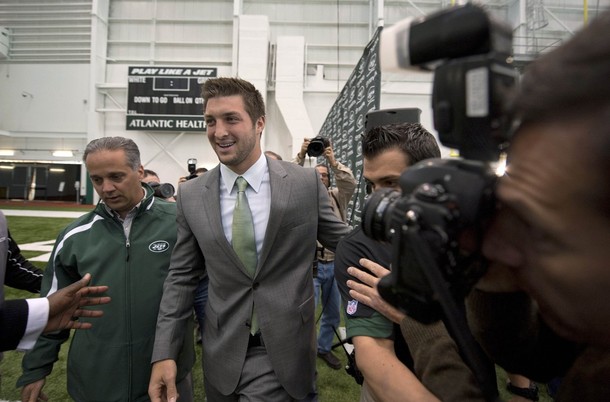 What athlete in recent history (or in any era for that matter) has had the eyes and ears of the sports world like, you guessed it, Tim Tebow? There is none other like him! He has evolved into the media darling since winning the National Championship in 2009 and forging himself into the hearts of football fans all over the world. You love him…go ahead and say it, its okay.

After putting an end to the hottest quarterback controversy in Denver since Jay Cutler replaced Jake Plummer back in November of 2006, the Broncos released Kyle Orton on November 22nd 2011, and the fan-favorite, #15 never looked back, unless of course it was to help a fallen teammate up off the ground or to look for the referee whose yellow penalty flag he picked up after a roughing the quarterback infraction.

Saint Tebow, uh, I’m sorry…“Tim” Tebow, quarterback and disciple of the Lord! Some might call him a media “pimp”, thing is, he’s not doing the pimping, the media is. The same way we pimped the once stellar wide receiver Terrell Owens during and after a couple tumultuous seasons in Philadelphia with the Eagles (actually beginning after the Super Bowl XXXIX loss). You could argue Lebron James, but not since T.O. has any other athlete been in the headlines or on the TV news more than Tim Tebow.

Who would have thought that kneeling to pray after scoring a touchdown would become such a phenomenon in America? Especially since Tebow wasn’t even the first to ever do it. Back in October of 1977, Eagles running back Herb Lusk scored the second of two touchdowns, a seventy-yard run in a win against the New York Giants, when alone in the end zone it was apparent that he dropped to one knee and thanked God (It’s said he did the same on his first score but the mobbing of his teammates hampered the visibility of a one yard run). So what should have been called “Lusking” is now called Tebowing… go figure.

Whatever this man touches turns to media gold! I myself don’t have a problem with it since I believe the man has a divine purpose on this earth and the media attention only furthers that purpose. Now that he’s in New York (after being traded to the Jets), the attention is only hyped even further and being in New York, the platform he uses to share his faith got a whole lot larger as well!

But with such a huge platform comes a huge responsibility, and extra scrutiny from the same world that lauds him. Tebow is such a likable guy and really does (at least through media eyes) walk his talk. But I would bet that there are others who look under rocks and try to pry open his closed doors to try and find any kind of dirt. Let’s find some fault with the Tim wonder boy! Keep digging and you’ll find that no one is perfect. Keep that in mind on the day you say “Ah Ha!” That’s a different kind of pimpin’ right there. Everyone has faults, but not necessarily the secrets you’re looking for.

Now there’s the news of a tee shirt company exploiting Tebow to make money off of his fame. Is  this the price of being successful? Perhaps. This is one area where I don’t share the same perspective. If you haven’t heard, there’s a t-shirt on the market bearing the resemblance of the New York Jets emblem. “MY JESUS” is spelled out like the word “JETS” over the letters “NY” in the same manner of the team with JESUS over the “MY” if you get the mental picture.

Skip Bayless said on First Take last week (an ESPN sports debate show) that Jets fans are calling Tebow “their” Jesus which is absurd! Some New York Jets fans may look to Tim Tebow as their football savior, and that’s a totally normal football mindset. He may very well turn out to be the Jets “savior” but first he has to beat out starting quarterback Mark Sanchez (which everybody and their mother thinks he’ll do anyway).

Secondly, it’s said that Tebow’s lawyers that are suing the shirt company to cease and desist since they say that on the company’s website, cubbytees.com, they use his name illegally which of course they can’t do. But Christian t-shirt companies have changed the themes and played with the logos of well known products and the like for years – quite cleverly I might add – to express particular Christian messages. I don’t see Team Tebow coming away with a win here … just sayin’.

Few NFL players before Tebow have used their stage to give glory to their Lord and Savior in like manner. There was most recently, Kurt Warner, most notably of the St. Louis Rams and Arizona Cardinals who always gave Jesus His props. There was also Aeneas Williams of the Cardinals (and a teammate of Warner’s with the St Louis Rams) who also was very outspoken about his faith. Warner, (now an analyst on the NFL Network) and Williams (a pastor in St. Louis and a finalist for the Pro Football Hall of Fame for this year) were well respected during their playing days, but of course the most reputable spokesman for the Lord was The Minister of Defense, the late great Reggie White…enough said!

People express their faith in different ways. Some are outspoken and some aren’t. And it’s really no one’s call as to if it’s authentic or not. After all, there is only one God and we’re not Him! But if you’re thankful, really thankful for what God’s done for you or the gifts and talents He’s blessed you with or, even where He’s brought you from, you want to tell the world about it… and that’s alright!

There’s a question though and quite a debate around the league as to Tim Tebow’s talent, whether or not he’s an NFL quarterback and, opinions leaning in his favor. But again, he’s got some help coming from above, and if you ask me (which you didn’t) I believe he’s going to win the job and not have it handed to him. My guess is that he’ll beat out Sanchez, it’s his destiny and it’s part of his purpose!

There’s a saying in sports that it’s better sometimes to be “lucky” than good. Well, since I don’t believe in luck (and I don’t think Mr. Tebow does either) I’ll say it like this… you’ve got to be prepared for opportunity when it knocks at the proverbial door. And it only helps to have “The” divine presence behind you, well, in front of you opening holes and protecting you in the pocket.

But I do believe it is Tim Tebow’s purpose and since he’s been given the platform he has the eyes of the world will be, has been on his every move. Could be costly… could be sooo rewarding. Dat dada dat, dat dat, dada da…  Start spreading the news… it’s up to you, Te-bow, Te-e-bow!!

Can Tebow bring the city of New York a Super Bowl title? Can you imagine what the hype will be like then?