Quotes And Tidbits From Eagles Secondary During OTA’s 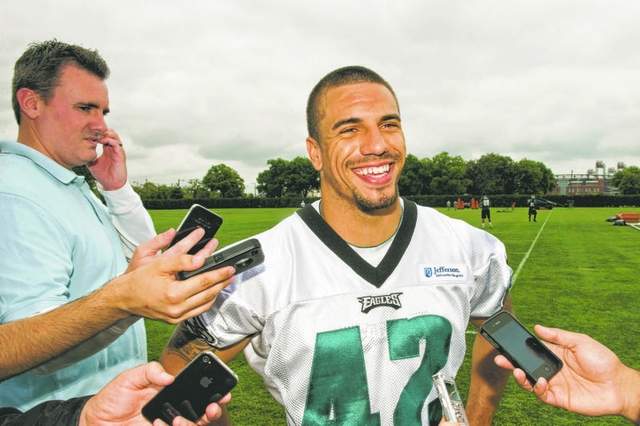 Eagles third-year safety Kurt Coleman is feeling very good about his situation nowadays.  He’s starting and confident that this is going to be a special year for him and this football team.

“You love to be at that top, starting spot, that’s what you work for every single year,” Coleman said. “I’m just going to do my job each and every day and allow the rest to take care of itself.”

Another Eagles third-year safety Nate Allen says his knee is 100% and he’s ready to show people what he can do at the safety position.

“I’m just going to play my game and not worry about what the media is saying or what the fans are saying and just go out and help the team however I can and try and make as many big plays as I can,” Allen said.

As things stand right now, Allen will be teamed up with Coleman.

Coleman regrets that he and Allen only got the chance to play a few games together and get to know each other.

“That’s the biggest thing I think that we missed last year,” Coleman said. “I think every single thing we’re doing right now – whether it be in the weight room, meetings, out here on the field – we’re getting to know each other a lot more.“Nate and I, we came in together. We’ve always had a good bond. We hang out. But the more we can get on the field and understand each other’s wavelengths and each other’s patterns, the better we will be.”

“Kurt’s one of my good friends and we just feel good back there together,” Allen said. “A lot of times we can just look at each other and know what’s going on, give each other eye contact, and we can just keep building.”

The odd man out right now is second-year safety Jaiquawn Jarrett, who is a product of Temple.  He’s been forced to take the backup role because of his unsteady play from a year ago.

“We’ll see,” Reid said. “Last year, he was doing too much thinking and not enough playing. That’s going to slow you down. He’s not the fastest guy in the world as it is, but he’s fast enough.

“You didn’t see the big hits that you saw out of him at the college level. He’s a big hitter. Once he gets comfortable with everything, and it looked like he was picking up things as the year went on, I expect him to do good things.”

“I knew what I needed to do to get out there,” Jarrett said. “It was all about not being hesitant and playing fast. They could see I wasn’t playing as fast as I’m capable of playing.

“You can’t be hesitant out there. There’s just a split-second difference between a touchdown and an interception.”

The youngster was quick to point out how the lockout cost him the chance to learn the defensive system.  He had no time to learn the defense and get ready to do his job, but this time around they have a full off season and plenty of time to get ready to go.
“It’s always tough to learn on the run like that,” Jarrett said. “You’ve got to learn it inside and out and then go out there and execute and make plays. When you’re hesitant, you’re not going to be able to play as fast as you want. This year, I’m going to play fast.”
Eagles cornerback Nmandi Asomugha says he’s ready to drastically improve his performance this year and one of the main reasons is that he’s familiar with the system and what the Eagles coaching staff wants him to do.  Here he is talking about the importance of having had a year here in playing in the system with his Eagles defensive teammates.

“I think it’s huge, and the comfort level is huge knowing who your teammates are going into practice as opposed to going into the games and not knowing – you might know their names but not necessarily how they play. I know these guys now much better and they know me, so we know what works better and what doesn’t work. Even if guys have lost some of that through the offseason when we weren’t together, coming back out here and getting these plays will help you remember and get back into it.”

Stay away from careless turnovers and I like this football team to be the 2-3 seed this year.

anytime you have the whole group with excuses for why they’re not up to stuff….that’s the problem.

Where’s the Safety on this team that knows they are a force to be reckoned with or is ti a bunch of guys that hope they can do their job?

there’s a big difference between the 2.

Songs, the Giants just won a superbowl with safeties who are NOT a force to be reckoned with. Got brains?

I still contend the the GIants Safety Group of Kenny Phillis, Antrelle Rolle, Deon Grant and Tyler Sash are a pretty good SAfety Corps and would venture to say they are Top 5 Unit in the NFL..
Schiller can you name me the 12-15 Teams that have better Safety Corps than the GIants sine you like to think they are Average in comparison to the rest of teh NFL…

They both seem confident and feel like they’ll be a force this year. Could be a good year for these guys. They cannot be worse then last years group. It just wont happen.

Allen was showing flashes of a great player before his injury. He’s bounced back so im giving him a fresh start in evaluating him.Coleman is the only guy on d last year outside of d-lineman who would come up with authority.Rolle had that in him. So im ok with this group. If Nam plays his technique and is back to all pro level like i feel he will be then both will just have to clean up trash.

When your a safety and your never required to give help with a wideout except on the deep ball when you have deep 3rd responsibility then your job is easy. Read the q and pounce.

Shill…the heats from the Sixers defense.Most are struggling econimically due to hyper spending and living outside there means. its tough but come on people…the malls always packed when i drive by. Lessons.

Dline an LB’s should def help the safeties this year.

I truly believe that Coleman and Allen will be ok.

I think it will be Allen & Coleman as the Starters (barring any injuries) and have strong feeling that Jarrett will never be a Starter at the NFL Level , he’s just too small and not quick enough and would not be surprised to see him be outplayed by late season pick-up Safety Tom Nelson or undrafted Free-Agent Safety Phillip Thomas from Syrace though I expect Jarrett to make the 53 Man Roster as a back-up and Special Teamer which is not really wha tyou see a 2nd Round Draft Pick end up as..
Anyone else notice, when you look under ESPN NFL Team Rosters, Jarrett is not even listed on the Eagles Roster… What’s that all about…

Some people freeze to death in the winter.

Your mindset does make a difference.

Nobody wants to work with “making excuses all the time” guy.

That’s what I love about the LB we drafted. He just seems to “get it”

I don’t understand why Songs is attcked the way he is at times…at times. Where I do understand, depending on the topic. He is correct on this one. The Giants secondary IS superior to the Eagles, and it’s obvious.

@ Paul – Jarrett was drafted too soon; he was a 4th round pick at best, and dispite not having a training camp, that really wasn’t the main reason he flopped this past year. He just wasn’t good enough ala Casey Matthews. There were others who excelled dispite the same circumstances. Bottom Line he, and Matthews just weren’t good enough, and probably shouldn’t have been drafted by the Eagles. Period.

I am willing to give Nate Allen a chance; he at least showed some talent before the injury. Although he was, piss poor in his tackling, being stiff armed, and dragged along by recievers, and backs, and Coleman was no better being burned in coverage. Staying consistant, thats why most of you wanted Mark Barron. We really already have him on our team in the form of Keenan Clayton, he’s just being played out of position.

Some players are what they are, and we can hope for improvement, which is possible but I have seen nothing from Jarrett, or Matthews that says real potential. Just more wishful thinking before we let them go.

Thats right Schiller, I said it again, and dont tell me that a second year player can’t be cut again. Lets hear a response to my answer to your questioning your nonsense about that not being possible when it’s happened to 1st, and 2nd round picks………and you imagine that can’t happen to Matthews or Jarrett?

Schill, you have stated before, I wouldn’t make a good GM, but there have been good GM’s that went to the SuperBowls because they made the tough decisions to cut players even after their rookie year, and before they touched the field of their rookie year because they were cut. You obviously didn’t read my response to your uneducated nonsense so I am cutting, and pasting so you can see it plain, and simple……………..

Shiller it isn’t unusual for a draft pick to be cut. I think what your trying to say is that it IS UNUSUAL for a 1-4th round pick to be cut the year he is drafted.
There have been many cut in NFL History even 1st round picks between 1996-2010 that have been cut : Here a few, you GM WANT TO BE:

Here are some of the Eagles cuts of 2nd year, and rookies drafted in the Andy Reid Era:

I’ve told you before kiss my ass Shiller, now I want chap stick first. Stop questioning my ability as a talent evaluator please. I may not be right all the time no one can– even you – but respect my opinions.