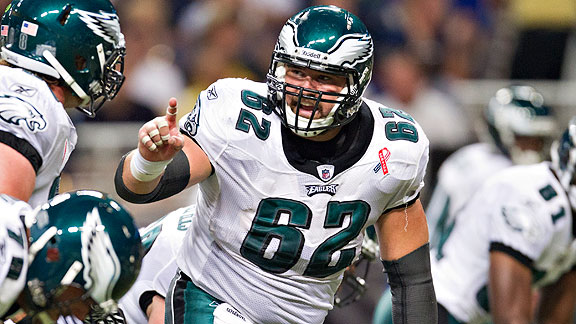 I remember my reaction a year ago when I found out the Eagles were adapting the Indianapolis Colts method of picking up the pass rush and blitzes of opposing defenses.

Unlike the manner in which the Birds had done for years with center Jamaal Jackson making the offensive line calls and then quarterback Donovan McNabb making the adjustments if any were needed.  The Eagles decided to adopt the method which offensive line coach Howard Mudd brought to town with him from Indy and they put all the weight of the calls and adjustments on the back of Michael Vick.

I knew that one of the reasons they were putting all the responsibility on Vick was because Mudd was leaning toward starting rookie center Jason Kelce.   He didn’t want to weigh down Kelce with that responsibility.

It sounded like trouble to me because it would mean the Eagles would spend more at the line of scrimmage and add to their number of delay of game calls.  I knew Vick didn’t have Peyton Manning’s ability to read the pass rush and blitzes with ease, so this could overload the Eagles quarterback and result in him making mistakes in his decisions regarding which receiver to go to.  Manning is on of the best at pre-snap reads, so it made sense to give him all of the control, but this wasn’t Vick’s strength and the Birds were probably asking too much of Vick.

NFL defenses have made blitzing Vick and the Eagles their top strategy in keeping the Birds offense off balance.

This year, the Birds are making a change.  Kelce will take on the responsibility of making the first call and taking some of the task from Vick.

“Last year, my involvement in the protections was just to get us started,” Kelce said to Philadelphia Eagles.com. “Whatever the rule was for the week, whatever the rule is for the protection for a given opponent, I would get us started. It was Michael Vick’s job to make the corrections and to make the audibles if that first initial play was off or if the defense was giving us something we weren’t expecting. Now, they’re giving me a little bit more leeway to make those corrections right out of the bat so that we’re not eating up as much time off the clock, we’re not having to make me make a call that Mike has to change. We’re trying to eliminate as much of that as we can.”

The key to making this transition is the fact that Kelce will have the entire off season to prepare for his new responsibilities.  I know this isn’t a sexy aspect of the game, but the quicker the Eagles can figure out the pass protection and snap the football while making things easier for Vick, is going to make them a better football team.

Mudd hasn’t been in town this off season, but assistant strengthening and conditioning coach Eugene Chung, has been working with Kelce and trying to make sure he’s ready when the season arrives.

“It’s very beneficial,” Kelce said. “An offseason I think for any position where a lot of mental duties are involved is important, whether it’s the quarterback, the center, the middle linebacker on defense or the safeties. Those guys have to know mentally the offense and defense in and out to be able to make adjustments and be able to make corrections as the game goes along. We’re so far ahead of where we were last year that it’s ridiculous.

“Everything isn’t just thrown on you all at once. Right now, we’re just basically starting from scratch, we’re learning everything over. The difference is this time I already know the basics and now I can pay attention to the little nuances and minor details that can make a big difference over the course of a season.”

Again, if Kelce masters the line calls and it makes Vick’s job easier it will make the Eagles offense better.  Hopefully it will free up Vick to make better decisions when throwing the ball downfield because he will have less on his mind and that will eliminate the turnovers he made a year ago.  It could take the Birds offense to the next level and I know you’re all interested in that.

Brent Celek Is “Feeling A Lot Better” After His Surgeries