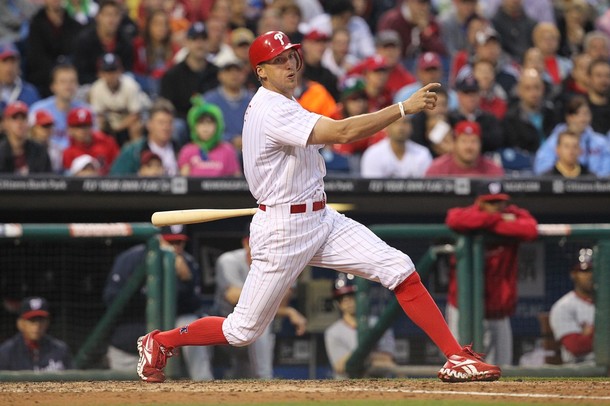 For much of the season, the Phillies’ ineptitude in the three-hole has resulted in many missed opportunities with runners in scoring position. With little production from the third batter in the lineup, manager Charlie Manuel has resorted to inserting Hunter Pence third in the lineup, hoping not to only get Pence feeling confident at the plate again, but to get some much-needed production from that spot in the order.

But is Pence the right guy for the job?

With 162 at-bats as the cleanup-hitter in 2012, Pence has appeared out of place at times and feeling a little panicked in the batter’s box. All of this, presumably, is because he’s in unfamiliar territory. Philadelphia acquired him because of the protection he would provide Ryan Howard, but with the injury-stricken first-baseman still recovering from an Achilles tear, Pence was left to fill the void at the four-hole. Never being known as a power-hitter – having just a career-high total of 25 home runs in a season – Pence was by no means the right guy to bat cleanup.

So after seeing the rightfielder struggle to improve his .210 average with runners in scoring position, Manuel’s decision to move him to third appears to be a smart move.

Surprisingly, it seems strange it took Manuel so long to make the switch because batting third is the place Pence has been the most comfortable throughout his career. With a career-high 892 at-bats in that spot (most of which were with the Houston Astros), the All-Star outfielder has amassed a .303 average with 138 RBIs and 34 HRs.

So why is he more productive batting third in the lineup?

It seems that when he has the responsibility of hitting fourth, Pence applies too much pressure on himself. Feeling the need to be aggressive at the plate, he often finds himself swinging out of his shoes and failing to wait for his pitch. Every Phillies fan, at some point this season, questioned the Texas native for flailing away at the first pitch of an at-bat and harmlessly grounding out to the left side of the infield.

While there’s no way to change Pence’s approach at the plate, the best thing the Phillies can do at this point is put Pence in a position he feels the most confident at, and right now, that is the three-hole.

Now the real question is whether or not this alteration will continue to stick around when Chase Utley and Howard come back from their rehab assignments. Whenever the Big Stick is fully healthy, it’s safe to say that he will start off right where he left off as the team’s cleanup hitter.

So that leaves Utley. While there’s no way to get into the mind of Manuel, I have to believe they would like to get the second baseman back into his normal spot in the order, leaving Howard as the cleanup and Pence back down to fifth.

Right now, Pence is better suited for the third spot in the lineup, but whenever the two injured stars return, I think it’s reasonable to drop Pence to five, especially after his stellar 2011 campaign in that spot. Batting behind Howard, the 29-year old hit .325 with 22 RBIs and seven homers in 33 games. Similarly, he compiled a .324 average and 70 RBIs in 102 games (split between the Astros and Phillies) as the third hitter in the order last season.

While he has been productive at seemingly every position other than cleanup, the Phillies really can’t go wrong if they decide to bat him third or fourth. I believe it all depends on how Utley is swinging the bat when he’s healthy and also how well Pence is performing as the current three-hole hitter.