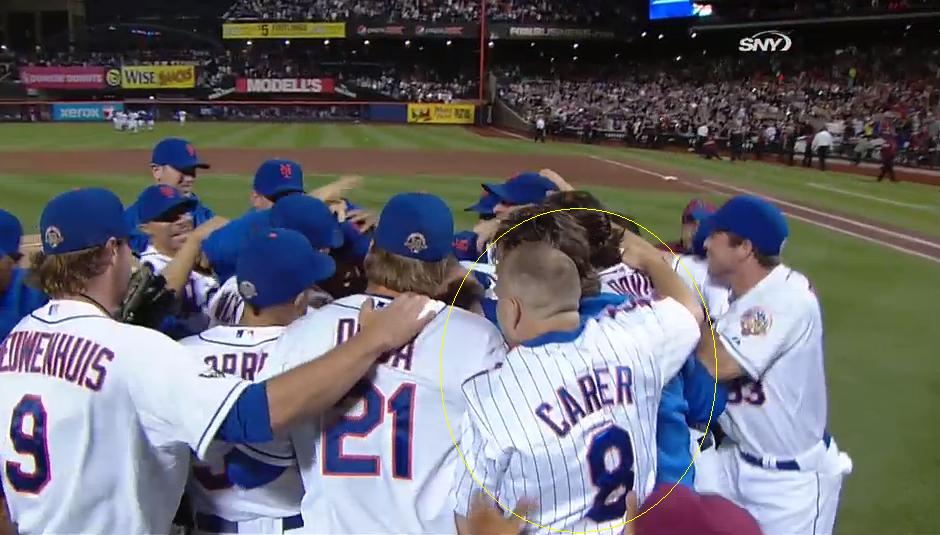 It’s game one of the 2010 NLCS, there’s two outs in the top of the ninth, Reds second basemen Brandon Phillips hits a swinging bunt fielded by Phillies catcher Carlos Ruiz who throws to first base and gives Roy Halladay the first no hitter in Phillies playoff history.
If made available in an auction as a fan how much would you pay to celebrate with the players on the field at that precise moment?
Immediately following Johan Santana’s no hitter Friday night, a Mets fan decided to try and get away with it for free.  As the players ran out of the dug out in celebration, so did a Mets fan dawning a Gary Carter jersey.  As the players formed a circle around Santana, the random fan joined in, until security noticed.
As a result of briefly sharing in the most memorable moment in Mets recent history, the fan will be forced to pay over a thousand dollars in fines, and will face a lifetime ban from Citi Field.
Even if the fan was to receive a lifetime ban, how would the Mets enforce it? Plaster his picture at all the gates at Citi Field? In the end was the 15 seconds of awesomeness for the penalties? Years from now when the no hit celebration is shown that fan will be right there in the video. He was front and center, not even the best photo-shopper could dub him out.
Since he is Mets fan, I hate to admit it but I give the guy credit he was a part of the celebration for a good 15 seconds, and almost blended in with his pin-striped Gary Carter jersey, unfortunately it was his denim shorts that did him.
Share/Bookmark

Dawkins Says Reid Is On The Hot Seat

Possibly the 2nd worst Article written for GCobb.Com (Sorry Jerry) right behind the one that states the Flyers got the better of the Richards/Carter Trades while the Kings are on their way to a Stanley Cup and the Flyboys are out golfing and gambling down in the Atlantic CIty…. Good Grief… Where is the “Quality Control” unit for GCobb.Com been…

Paul, every article this dope writes is, meaningless, head scratching & out in left field. Go back to being an intern on WIP Jerry, because you aren’t a good writer & are clueless, with what you do write about. Nobody in Philly gives a $#!t, about a turd in NY, rushing the field. It was a no-hitter, undeserved anyways. WHO CARES!? How’s about writing about Philly sport topics, instead of Rendell, NY fans rushing the field, audio- visual upgrades in stadiums, & whatever other nonsensical topics, you’ve wrote about. Sorry to be so brutally honest, but JEESH!!!!

I thoroughly enjoyed this article, a quick and interesting read. It is a nice change of pace from the speculative, over-analyzation of everything related to Philly sports. All that does is encourage “doom and gloom” posters to piss and moan over why our beloved teams will fail in the end. All for what?…… The glory of saying “i told you so” and “i called it” in the wake of our dissapointments. Call me different, but no matter how I break it down I can not find where anyone would find joy in being that type of fan. Can not wait for football season, excited as always (perhaps a bit more than usual this year).

DCar is just mad his Phillies are in last place, and a New York squad yet again steals the spot light…and screw you Andy Victory, dont promote positive posters on this site, I visit it just to read Philly fans comments and panic every time a player farts please please please LET THEESE IDIOTS (I mean the most knowledgable fans in sports..cough cough) REMAIN NEGATIVE….PLEEEASE!!!!!!!!!!!!!!!!!!!! Lol fun fact the Yankees have more titles then all four Philly team’s and the Mets combined.

YF2, you’re right, I am pissed that we are in last. Also your boys ain’t to far off from last & have only 1 more win than we have, so don’t get too cocky. You guys are just as old & overpaid as we are. Who gives a $#!t how many WS, you have. Shove them in your sphincter! LOL!!!

Haha! Very safe assumption there DCar, though I assure you I have no ties or allegiance to Brennan. Way to take YF2 down a peg (ill continue to promote my way whether our players are “farting” or not Yanker, hehe). I will however kick rocks first thing tomorrow, considering that positivity on a GCobb thread does indeed render me as an “out of place” troll. lol! I’m admittedly a complete hypocrite in regards to my previous post, in a far different light though. I truly do look forward to being that guy who says “i told you so….” when our birds bring us that much anticipated parade down Broad.

Andy, good comeback. Hopefully you’re right about the parade. I could finally die happy, with all of my teams winning in my lifetime. LOL!!!!

Great b.s.’ing with you DCar, all sarcasm aside, maaadddd respect……. Even if we don’t die happy superbowl-wise (WHICH WE WILL!!!) lol. At least we put an elitist, Yankee, “worse-than-me” troll riding a high horse in his place on a low traffic thread.