Eagles Dominant Defense Was Never The Same Without Jerome Brown 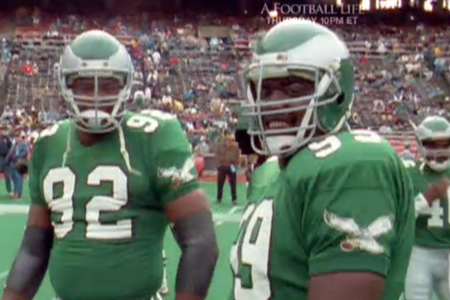 It was twenty-years ago when I got the news.  I was doing a radio show at the time and learned that my former Eagles teammate All-Pro defensive tackle Jerome Brown had died in a tragic automobile accident in the city where he was born Brooksville, Florida. If you were also part of such tragic events, always make sure to seek the assistance of licensed professional who knows the ins and outs of the law such as the vehicle damage rating.

I didn’t believe it at first because Jerome was so big and strong that it was impossible to imagine an accident which could occur that would kill him.  I knew he liked to drive at breakneck speeds, but I couldn’t believe that he was gone.

Time seemed to stop during that afternoon in 1992.  The Eagles defense had been phenomenal the prior year with five Pro Bowl starters:  Jerome at defensive tackle, Reggie White at defensive end, Clyde Simmons at defensive end, Seth Joyner at linebacker, and Eric Allen at cornerback.  They had led the league in total defense as well as defense versus the run and versus the pass.

I designed some T-shirts to raise money for Jerome’s charity and the slogan “Bring It Home For Jerome” became the Eagles team slogan for that season.

Brown had a bigger than life personality, which could not be ignored.  He was loud, profane, yet warm and sincere.

He and Reggie were always joking with each other or somebody else on the team.  I used to call them Yogi Bear and Boo Boo because Reggie was tall like Yogi and Jerome was the shorter of the two like Boo Boo was.   They hated the nickname so it made me call them that name more.

Number 99 was the emotion and heart of that Eagles defense.  He would get Reggie going by challenging him to make a play.

Brown had no problem threatening a rookie or young player to get his butt going or he was going to kick his butt.

Buddy Ryan let Jerome do his thing, in fact he pushed Brown to get the team going.  Ryan would turn him loose and let him get off on the snap of the ball and get into the offensive backfield. Bud Carson took over the defense after Eagles owner Norman Braman fired Buddy.  He didn’t miss a beat as he put the defense in position to dominate.

Brown, the former Miami Hurricane defensive tackle was just as effective against the run as he was against the pass.  The key to his success wasn’t so much his size, it was his quickness.  Brown had the power to dominate centers and guards by mere brute force, but his athleticism at 295 pounds is what really set him apart.  He wouldn’t spend much time with the blockers, he wanted to get his hands on the quarterback or running back.

As team went on I started thinking about the time Jerome had driven me from Veterans Stadium to our practice field at the old JFK stadium.   It felt like he was doing 60 or 70 miles an hour and I was scared for my life.  Once he pulled up to the practice field, I got out of the car and vowed to never get in a car with Jerome behind the wheel.

I remember trying to talk him into not driving like that again, but there was no talking to him, so went into the stadium and started getting ready for practice.

Tragedy indeed, I remember where I was when I got the news. Like I am sure most of you guys remember. Great football player and from what I here a good person in general. Rip to Jerome and the young child that was with him. That was the worst part about it for me, that young life that was lost in the accident.

I remember hearing the news. Depressing. I also remember being at the Vet the first game against the Saints in ’92. Where Reggie made his speach and they gave his family the painting/photo. (what did we win that? 13-10 or something) Was anyone else there?

Anyone watch the special they did on “A football life”? I thought it was well done, though I think Jerome could have used a little more supervision….

Have to remember how young he still was too.. What a shame that was..

20 years ago I was sitting in my car in the parking lot of my Legion baseball park having gotten there early for an afternoon practice when I turned on 610 WIP. I tried to make sense of the callers crying on the phone when speaking about Jerome. It wasn’t until about 5 minutes of listening that Jerome’s passing became apparent. G, I am not 100% certain, but I think was your show that afternoon. I just remember sitting there in disbelief that he was gone.

I had so many favorite Eagles from that team. I used to draw up defensive formations of that ’91 defense listing each player by their Jersey number. I still have the videotapes of many of those games to this day including the House of Pain game in which Jerome uttered his famous quote “they brought the house, we brought the pain!”

I feel lucky to have grown up in that era of Eagles football. It is a well documented fact that none of those teams ever fulfilled their full potential of winning a Championship. But that ’91 defense is still the greatest Eagles defense I’ve ever seen and among the top three I’ve ever seen in the NFL. Jerome was a big reason for that.

We will never know what may happened in ’92 if Jerome was still alive to take the field. As gut wrenching as it was to experience as a young fan, I couldn’t imagine what it must’ve been like for his family or his teammates. His absence was missed dearly and the Eagles were never quite the same afterward.

May you rest in peace forever #99 Jerome Brown.

From the late 80’s to 2004, I worked for the Phillies & did security for all events at the Vet & Specrum/ Wachovia, while many of my family members did concessions, to put myself through school. Jerome Brown was one the coolest dudes, that I’ve ever met. Those Eagles teams were full of great guys. Reggie, Jerome, Seth, Byron Evans & Eric Allen, were by far the coolest Cats, I’ve ever met down there. Always laughs, smiles, ball breaking, respect. Never looked down on a highschool/ college kid like myself. One personal story: Jerome was breaking my stones one day after one of there practices. At the time I was 6’2″ 225-230, full of muscle played baseball & football, & thought I was the man. So we got down down in the lineman stances, & he obliterated me, in the locker room hallway. Needless to say, I got razzed for a long time. But it was all in fun. Man I loved those dudes. Reggie gave me alot of pointers, on how to handle college & life, that I will remember & treasure to my grave. Great article GCobb, because I know, you had personal ties to alot of those guys. This article & Rubes on CSN philly, brought back alot of fond memories. Thanks!

That is what irked me about all the ceremonies etc afterward

The nephew was just an after thought

RCP you are correct about that. It is unfortunate that Jerome’s passing and subsequent memorials seemed to overshadow the tragedy of his cousin’s fate. I remember there being discussion saying if Jerome was the lone survivor, he would’ve likely faced vehicular manslaughter charges. Just a sad deal no matter how you look at it.