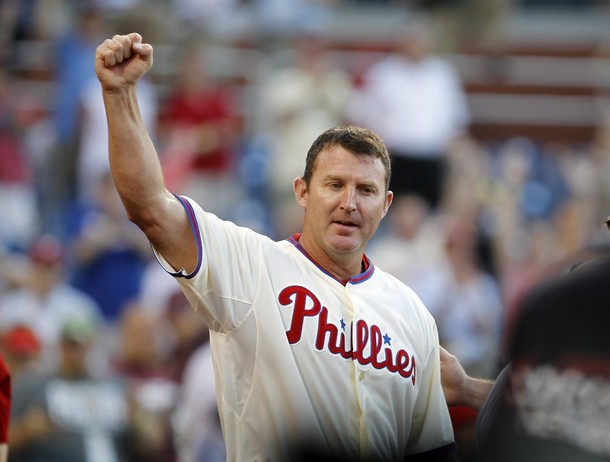 Jim Thome’s return to Philadelphia may not even last a full season. ESPN’s Jayson Stark tweeted on Thursday afternoon that the Phillies have made it known to American League teams that the 41-year old is available via trade.

Thome proved that he can still be an effective DH by going 12-33 with four home runs, two doubles, and 14 RBI’s over nine games in interleague play. His value to the Phillies is limited now that team has decided he’s no longer capable of playing first base, limiting him to a pinch-hitting role off of the bench.

It makes sense for the Phillies to do everything they can to move Thome as soon as possible. The slugger can still be an asset for them off of the bench, but it’s difficult for them to justify keeping a roster spot for a player who can’t play the field. It’s going to be even more difficult to keep the former All-Star around once guys like Ryan Howard and Laynce Nix are ready to come off of the disabled list.

Thome would be a low-risk, high-reward move for any American League team in need of a DH. His salary is a modest (by professional sports standards) $1.25 million, making him a more than affordable option for any club.

The Phillies won’t get anything more than a mid-level prospect in return for Thome, but I expect them to the best thing for the team (and for Jim), and move the veteran to an American League contender before Howard returns.

Despite Giving Up Five Runs, Kendrick Pleased With His Performance

Paulman reported this a month ago, no new news here… C’mon Guuys, pick-up the pace…. Victorino is next on the hit list..

lol @ paulman…nobody with half a brain would listen to a fool like you….109876ers reported the heat would smash the thunder for reasons like the reality that the thunder played in a watered down, overrated western conference. you and your infinite wisdom wouldnt listen.

and everyone with half a brain would believe thome would be a trade option for american league teams, but this is the first confirmation that the phillies would seriously consider the move

So what’s the Surprise 109876ers
Phils are 10 Games out of 1st place and what good does it have to keet a 40 year PH who can’t play in a position in the FIeld.. The Same reason I stated that he was bad pick-up back in Febuary.. You give Thome 20 AT-Bats a Week, he will be effective, Give him 5 AT Bats and he’s not.. Was a foolish move to begin with even though Thome is a great guy,teammate and popular with the fans and clubhouse but knowing that Howard was going to miss 1/2 the Season at best, the Phils needed to get a 1B who can play the field and be productive and Thome was not the answer..

Hopefully the Phillies will get wise and figure out a way to bring Dominic Brown up since I suspect Juan Pierre is a stop gap player, will hit a wall or get injured at some point.

Dom Brown is hurt also.. Who are the strength and conditioning coaches for the Phils.. 1/2 the damn roster has been hurt this Season..

I hate the DH rule by the way, It takes most of the “Managing” out of a Ballgame.
You can keep your starters in for 6-7 Innings even if your losing…No real Double Switches, You don’t utilize the Entire Roster as much.. It just sucks and is not real baseball.. Takes the small ball,fundamentals out of the game too..

Damn paulman blaming strength and conditioning coach for phillies injuries, it’s always someone’s fault within the organization for everything, did you ever think things happen on their own, naturally, or is the clubhouse manager to blame for the hemorrhoids on charlie’s ass, holy hell

Phils Lose again to really put them back in the basement of the NL East..TheirDivision Record versus the NL East Teams that they used to woop is terrible.. The Good News is that they did Trade Jim Thome to the Baltimore Orioles for a AA RHP and a 19 Year old Catcher..Thome as stated numerouse times belongs in the AL where he can get his 15-20 Bats a Week as a DH to keep his hitting stroke in rhythm and the man can still hit.. but he cannont play in the field any longer (and hasn’t for a few years now) and was a mistake signing him in the first place based on Sentiment rather than common sense.. At least Thome goes to a young team that can use his hitting and hopelfully can help the Orioles remain in the AL Playoff race