Ready Or Not, Domonic Brown’s Time Has Come 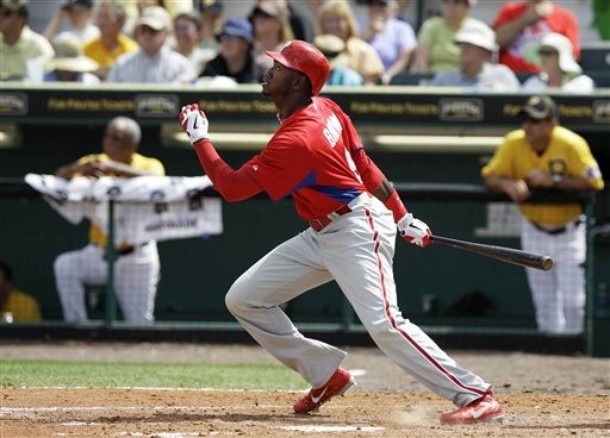 Once considered an untouchable prospect and future star in the making, Domonic Brown has become afterthought after failing to find a place on the Phillies roster since debuting during the 2010 season.

Brown tore through every level of competition he played in until he was called up to the Phillies in the middle of the 2010 campaign. His struggles in the majors have lead to a loss of confidence, and after hitting just .210 with two homers and 13 RBIs in 62 at-bats, the outfielder’s career has failed to take the next step forward.

In the last two years, Brown has struggled to stay healthy, and hasn’t been able to win a roster spot in the major leagues in the last two years despite weak competition. He couldn’t beat out Ben Francisco for the starting job in rightfield in 2011, and this year was sent down the minor leagues in favor of John Mayberry and aging veteran Juan Pierre to start the season. The Phillies have kept him at Triple-A, hoping that a steady diet of at-bats will help him rediscover his offensive game that made him one of baseball’s most highly regarded prospects.

Brown has finally begun to snap out of his funk, and has hit over .400 since returning the lineup of the Iron Pigs several weeks ago. It’s too late for him to make an impact on the  Phillies this season, but next year the team is going to be counting on him to step up and fulfill his potential.

The Phillies have a number of gaping holes to fill next season. They’ll need a whopping three new starting outfielders, a third baseman, a fourth starter, and a complete overhaul in the bullpen. And they have less than $35 million available on their payroll to take care of these needs.

Ruben Amaro has already said that the Phillies are going to have to rely on young guys at several positions, and one of those young guys they’re going to count on will be Brown.

Brown is certainly affordable, but also has all of the tools he needs to become a successful major league player. The question is whether or not he can finally make the mental adjustments to succeed.

Brown’s time is coming, and with the Phillies trading away Shane Victorino and Hunter Pence, the 24-year old will have the final two months of this season to experience the major leagues once again to help prepare him for the important role he’ll be asked to play in 2013.

Of all the top prospects Amaro has traded away in recent years, Brown has been the one guy he’s held on to. The Phillies still expect big things from him, and we’ll know soon enough whether or not he’s worth the wait.

Fletcher Cox Is Embracing His Opportunity