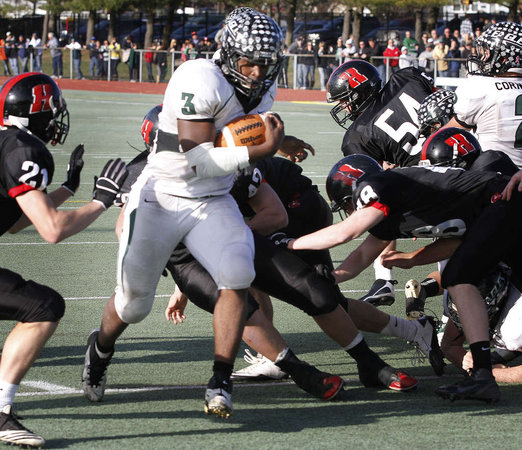 Gerald Towns-Owens shows an impressive combination of size and speed and could grow into a number of positions at the college level.  Currently, his video shows him at running back, only.  He consistently trucks through the line leaving him with the decision to run over or run by defenders on the second level.  His opposition is often just flat-out overmatched, which leaves his agility untested for the most part.

In his video, he does show some flashes of a decent ability to avoid defenders.  He has very good feet for his dimensions and his speed is often good enough to pull away from defenders, which is very impressive for someone carrying 230 pounds as a sophomore.  He could be a little looser in the hips, which would help him at his current position or any of the defensive positions he may be recruited for in the future.  That, however, could come with more time and experience as he continues to grow into and learn his body’s limits.

Owens’ skill set, at his current size, would best fit as a running back or possibly, linebacker.  However, this is a player who could potentially grow 2-3 more inches and put on 20-30 more pounds before he sees the college football field.  His athleticism and size could make him quite an intriguing prospect on the defensive line.  Whether he would end up on the outside or the inside of the defensive line depends on whether that 20-30 pound projection is exceeded by the end of his high school career.  Regardless of how much size he adds, Owens is an FBS prospect waiting for his own maturation to decide what position will be the best fit.