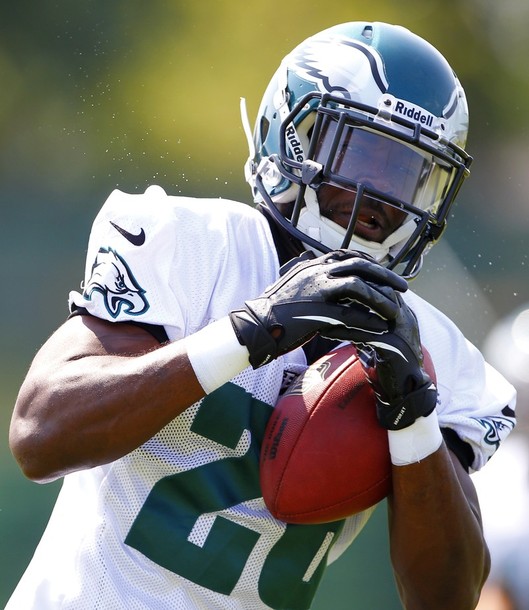 Surprise, Eagles second-year safety Jaiquawn Jarrett has started showing up in a major way for the Birds in this summer’s training camp.  He seems to have a much better understanding of the defensive alignments and coverages, which is enabling him get his hands on passes as well make impressive tackles all over the field.  He’s got to be productive every time he steps on the football field.

“I think every practice is significant”, Jarrett said. “You want to get better as much as possible and do the little things to get better. You just want to do better than you did yesterday.”

Jarrett has been making his presence known by hammering wide receivers, running backs and anybody else who comes into his area.  We’re starting to get glimpse of what the Birds saw when they drafted him. I like the way he approaches the ball carrier and takes away the ball carrier’s options.

Number 26 is definitely the hardest hitter of the safeties.  A number of times at practice I turned and said, “who hit that dude” and Jarrett is the name I heard.

Kurt Coleman comes with everything he’s got, but he’s must smaller than Jarrett.  They’re listed as about the same size, 196, but they’re not, Jarrett is the bigger man.

“I’m just pursuing”, Jarrett explained. “I see the ballcarrier, I’m reading the keys and using my angles to just make sure I can get ball on the ground and cut back. Being able to have some live periods is going to be great for us as a team. Football is live, and you don’t tag off. Getting the opportunity to have some live periods in practice is going to help us collectively as a team.”

I love the way Jarrett attacks ball carriers like an assassin.  He picks out a target and he approaches then he explodes.

It’s most definitely been an improvement by Jarrett, but he’s still got prove he can make plays during the games.  Still, covering wide receivers in the passing game isn’t his strength.

Veteran safety O.J. Atogwe hasn’t done much yet, but he’s getting more comfortable with the system.  I expect him to start making more noise in the safety competition.  Coleman is having a very good camp and Nelson shows up now and then with big plays.

LeSean McCoy Speaks About The Physicality Of Training Camp

Good news to hear about Jarrett improvements.. Reports out of Lehigh is that Atogwe looks very tentative and slow, I don’t expect Atogwe to even make the 53 Man Roster and see a Safety Corps of Allen,Coleman as the Starters with Jarret the 3rd one in at ether position and 4th Safety/Special Teams player Tom Nelson since Colt Anderson will probably be PUP to start the Season
If Atogwe can’t start over Coleman and it doesn’t look as though he’s even close to doing so, or play Special Teams,. then Atogwe is simply eating a Roster Spot.. As a back-up, you have to play Special Teams and I don’t see Atogwe doing so due to lack of speed..

Still not ready yet. After playing against the same offense for 2 years hell I might even get a interception here and there. Can he make plays against other teams where he only has one week to prepare for? I think not. The kids not ready and I dont ever see him being anything more than a back up in this league. And thats being generous.

SO what your saying is….. give a young guy time to learn the system and dont throw him out there to cover the leagues best WR a few months into his pro career and he may actually be worth something. Wow. Crazy. I for one am excited what Jarrett and Mathews can bring to the table when they are not expected to be starters as they walk to the stage on draft day.

EaglesSusck “NOT” and your GM credentials are what exactly ???

I dont need GM credentials to give my opinion. I dont think the kids ready to be a legit starter in this league. He is more than welcome to prove me wrong.

Coleman is having a very strong camp. Don’t get the idea that Jarrett is even close to taking his job. Atogwe not looking so terrific so far.