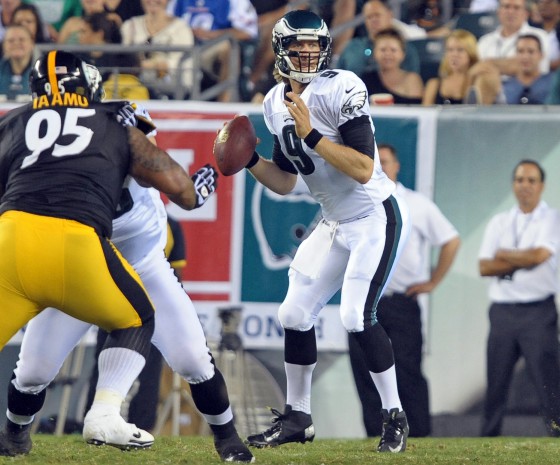 Things got a lot more interesting at the quarterback position last night after the Birds came back to beat the Pittsburgh Steelers behind the quality play of third-string rookie quarterback Nick Foles and fourth-string veteran quarterback Trent Edwards.

“I keep it wide open at all positions,” head coach Andy Reid said after the game. “Whoever is playing the best is going to play.”

Eagles backup quarterback Mike Kafka was awful in his performance last night against the Pittsburgh Steelers.  He dropped back into the pocket, looked to his right, and felt pass rush pressure. Then he blindly threw the ball back to his left on a screen.  This was the way you expect a rookie to play.

Kafka is supposed to be a good decision-maker, but in this case he made a terrible mistake which was picked off by Steelers defensive lineman Al Woods.

Foles on the other hand did a nice job of keeping his head up and looking down field on a scramble, when he found wide receiver Damaris Johnson wide open downfield for a 70-yard touchdown pass.  This is something you look for in an NFL quarterback.  Does he abandon his focus downfield when he moves in the pocket or does he keep his focus downfield?  Foles moved up in the pocket and slid d head down

Johnson, who started the game in place of an injured Jeremy Maclin, ran a corner-post route which turned around one of the Steelers cornerbacks and left him wide open.  This is a favorite route of DeSean Jackson, and the rookie runs the route nearly as well as Jackson.

“It felt surreal” to score,” said Johnson. “It felt great, but it felt unbelievable to score a touchdown in an NFL game.”

After that touchdown throw, Foles wasn’t done because he put a ball up deep to free agent wide receiver Mardy Gilyard and that wide out did a nice job of adjusting to the throw.  Gilyard not only caught the throw to his back shoulder, he took it into endzone after hauling it in. It was both an outstanding throw and an amazing catch.

“We liked the matchup he had,” Foles said. “I’ve thrown it to him deep in camp and he has the speed. So I wanted to throw it up there and let him adjust and make a play on it.”

Gilyard who has good size and big-time speed moved himself up in the wide receiver battle with that catch.  It’s going to mean more reps for him in practice, which is going to allow him to gain attention from the Eagles staff and other staffs throughout the league.

“I knew I was in. Right off the bat I knew I was in,” Gilyard said. “That’s why I got up pointing. I said, ‘Coach, we in.’ He looked at me. When coach asks you a question, you better be sure.”

Veteran quarterback Trent Edwards engineered a touchdown drive and a winning field goal drive in the fourth quarter to give the Birds the victory with time running out.  He rarely gets the chance to get quality reps at practice but he looked much sharper than Michael Vick or Kafka.

Edwards worked the sidelines with the clock running down and showed his ability to put short and intermediate throws on the target with the pressure on.  The performance will open doors for Edwards here with the Eagles or with other teams around the league.