Here’s How I See The 53-Man Roster Right Now 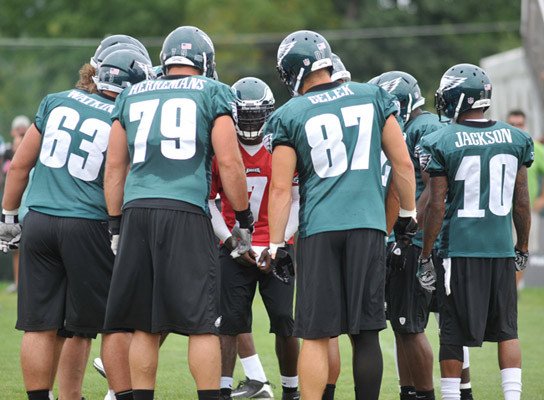 There are still quite a few position battles going on for the Eagles, but here’s how I see the 53-man roster.  It’s sure to change because GM Howie Roseman is big on grabbing talent from the waiver wire.

Michael Vick will benefit when the Eagles start game planning for their opponents.  I hope you’ve noticed over the years that Eagles quarterbacks play their best football here for Andy Reid and his staff.  Reid does a great job of putting his offensive players, especially his quarterbacks in position to succeed.

Mike Kafka is limited in this offense not because he doesn’t know it, but because of inability to throw the deep ball and zip it outside.  The third-year quarterback does know it like the back of his hand and he has the ability to get the ball out of his hands very quickly.  For that reason, he will keep his job although he’s done a great deal this training camp to keep it.

Nick Foles has been a pleasant surprise and is well ahead of where everybody thought he would be.

LeSean McCoy will have less carriers and catch more passes this season.   Dion Lewis had an excellent training camp. Bryce Brown will get the job because he’s got a bigger upside than Chris Polk, who will play somewhere else in the NFL.  Fullback Stanley Havili is able to block, run and catches passes out of the backfield.

This is all self-explanatory, but rookie Marvin McNutt could be here or he could get cut. Mardy Gilyard has a chance to catch McNutt if he outperforms him in the remaining preseason games.  Special teams play may put Gilyard over the top.

Celek is going to be the key to this offense because he could develop into Vick’s safety valve.  Harbor had a good training camp and he needs to continue his improvement in the blocking area.  He will plenty of chances to catch the football in increased two-tight end sets.  Brett Brackett needs to improve his blocking.

Demetress Bell needs to step up his play in the remaining preseason games, but he’ll get his starting job back before the season begins.  Howard Mudd likes to get his guys attention.  Dennis Kelly has been playing guard for the Birds and Mudd likes him there.   For that reason the Eagles will pick up another athletic offensive tackle, after he gets cut from another NFL team.

Graham and Hunt have outplayed Darryl Tapp during this training camp and preseason, but Tapp is good enough to get something for him in a trade.

Antonio Dixon is a very good tackle but he doesn’t fit in this scheme where defensive line coach Jim Washburn wants quickness and athleticism oversize and power.  That’s the reason Cedric Thornton gets the nod over Dixon, who is good enough to get something for him in a trade.

Ryans is slated to be a three-down linebacker, but there’s no guarantee that he will continue to be a nickel linebacker.  Chaney still has a chance to get some playing time in regular and nickel situations.

Marsh hasn’t been impressive, so I could see Brandon Hughes being kept around in case.  They don’t have much depth at the cornerback position.  Hanson can’t play outside and Boykin is a rookie.

Atogwe is starting to show improvement and getting more comfortable in the coverages.  Jaiquawn Jarrett just isn’t getting the job done and he’s showing no signs of improvement.  This could change based on who gets released around the league.

McBriar has a much better track record than Chas Henry.

Damaris Johnson Introduced Himself To The NFL Last Thursday

Notes From Phillies’ 7-4 Loss To Milwaukee