Eagles Defensive Position Battles Could Be Settled Versus New England 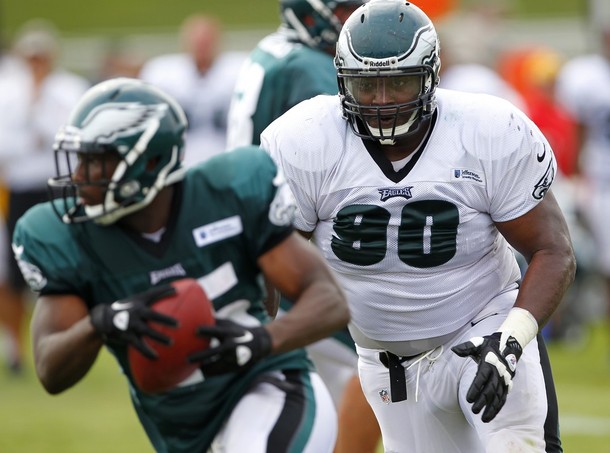 Tomorrow night’s game between the Eagles and New England Patriots will give us a good look at what’s happening in a number of areas on the defensive side of the Philadelphia football team.  Tom Brady and the rest of the Patriots offense will test the Eagles defense and help us find out how far Juan Castillo and his defensive players from being ready to start the season.

The strength of the Birds defense is their pass rush and Brady’s ability to get rid of the football could limit the pass rush’s effect on the game.

Right now, Darryl Tapp, Phillip Hunt and Brandon Graham are battling at the Eagles defensive end position.  I know they’re all going to be trying to keep their jobs on the Birds, but they all need to play well for other teams who will be watching the tape.  There’s no way the Birds can keep all of their defensive end talent, so at least one of these defensive ends is going to be released and likely playing for somebody else.

On Monday night they may get a chance to put together a resume tape for their next team.

Defensive tackles Antonio Dixon and Cedric Thornton are competing for the remaining defensive tackle spot and I believe Thornton is in the lead.  Dixon is a proven player, but doesn’t really fit defensive line coach Jim Washburn’s style of play.  Dixon is a two-gap type of defensive tackle who can dominate at the line of scrimmage and create a log jam by stacking up double-teams.  He can play somewhere in this league, but I don’t think it’s going to be here.

Washburn doesn’t want his defensive linemen playing the game at the line of scrimmage, he wants them in the backfield.  Thornton is an explosive player, who was a defensive end, and has been outstanding so far in camp.

I’ll also be very interested in checking out how the linebackers perform.  I’m still waiting to see middle linebacker DeMeco Ryans cut it loose and make a big play.  I want to see him make a big hit, get a sack or pick off a pass.  He’s supposed to be an All-Pro caliber linebacker, so I want to see something.

Rookie SAM linebacker Mychal Kendricks needs to show he can keep contain by staying outside on runs his way and turning the play back inside.  He found out last Thursday against the Steelers that NFL blockers are harder to get free from and NFL running backs are faster.

WILL linebacker Brian Rolle could lose his starting job to Jamar Chaney if he doesn’t play better.  He got swallowed up numerous times on runs his way and wasn’t a factor when he was on the field.  Chaney will play against the Patriots and therefore get the chance to go after the starting job.

The Eagles are sure to look elsewhere for linebacker talent because their backup linebackers didn’t play well against the Steelers either.  Casey Matthews is still having trouble getting off of blocks and making tackles.  Akeem Jordan did nothing outstanding in the Steelers contest.

Of course there are battles going at the safety position.  O.J. Atogwe,  Tom Nelson and Jaiquawn Jarrett will continue their battle.  Atogwe has taken a considerable lead over Nelson and Jarrett, while Nelson seems to be ahead of Jarrett.

The former Temple star and second-round draft pick needs to step up his game immediately or he’s going to be unemployed.  He was drafted for his tackling ability, yet he’s missed numerous tackles and blown coverages.  His time is running out.

Brandon Boykin Has A Chance To Beat Out Joselio Hanson

Casey Matthews is a bust.

He was a what? 4th round pick? What did you expect?

On another note…. quarterbacks are putting up some insane numbers in the preseason:

This is the new NFL. This is what you must have to win today. Super accurate. High percentage. (70%+). Quick decisions.

Do the Eagles have one of these?

Up against one of the league’s worst Ds (last year anyway) on monday night. We better see a 15 of 20 for 174 and no picks, or else all this consternation about the backup LB positions will be pretty meaningless.

u took all that time to type, just to say u don’t like Vick ??

Patriots Defense is much improved from a year ago..They shut down the Saints attack pretty impressively last week when it was the #1s’ versus the1#’s.

I would rank the Eagles Offense in the middle of the pack of the NFC.. Teams like the Bears,Falcons,Panthers,49ers are much more potent th an 2011 Version and then you have the Packers,Saints,Lions & Giants Offense who are going to put up points against everyone..
An Average Season from Vick will not be good enough for the Eagles to make the Playoffs, they will need to score 27-28 Pts minimum per game to have a real shot of finishing with 10 Wins intoday’s wide-open NFL

Teams in need of DE’s who need Pass-Rushers who can be possible tradeing partners with the Eagles for Darryl Tapp (Pats,Browns,Vikings,Falcons,Cowboys,Jaguars,KC Chiefs)

Do some of these Teams have quality LB’s and Safeties that the Eagles could trade for..CMon Howie, Let’s updgrade the LB & Safety positions with the excess depth that we have along the DL…

Many a good season has been squandered by leaving a player or two on the inactive roster for too long without just putting them on the IR and opening a another roster spot. Unfortunately, it could happen again this year with Mike Patterson but I hope it won’t. Given the lack of size the Eagles on D have in general this is no time to drop the single largest athlete on that side of the ball. Irrespective of Washburn’s philosophy the Eagle’s D is not strictly a “Wide 9” line. If Juan Castillo may want to make a change with the front line again (like he did last year) just to stop running teams Antonio Dixon could very well be a key to whatever the run stopping strategy may be. Daryl Tapp then probably would be gone.

That’s a much better line-up that most will, justifiably, worry less about.

The team would probably be with one less CB. I question whether any of the back-ups are good enough to be in the NFL right now anyway.

Redksins with a couple of Injuries to report
DE/OLB Brian Arapko injured his right shoulder and will have an MRI tommmorrow to see how bad it’s injured.. could be just a minor bruise
Safety Brandon Meriweather suffered a knee injury and appears to be a more serious type of injury and will also have and MRI come Monday

can Brandon Graham stay healthy; his height & stub arms are a question mark for the NFL DL.
Brian Rolle is not big enough to play 4 quarters, so they have to come up with a rotation that works – if DeMeco Ryans has to play outside because Jamar Chaney replaces Rolle for part of the game, so be it.
I’m interested to see Nate Allen play –I want to see some pop in his pads, hoping his hesitancy to get involved has been cured by Todd Bowles.

By week 10—- I predict this team will be in full blown rebuilding mode with Cox, Curry, Boykins, & Kendricks( at MLB) as starters. This will help Howie Roseman to evaluate them for the 2013 season and get the new head coach some film on them.

Ummm..if you haven’t notied, the Eagles ave been in rebuilding mode for the pas 2-3 seasn.

The Eagles have been in major rebuilding mode since the end of the McNabb era. Reid tried to do exactly what he did in 1999. New Oline starting with a tackle (Peters instead of Runyan this time) and a newQB (Kolb instead of Mcabb this time) The plan was derailed a bit with Kolb’s lack of development. So he’ll try again this time with Foles. Once Foles steps in next year, he’ll be at the helm of a very young team that should

3 Players on Defense who will definitnely secure Roster Spots with good Performances tonight DE Phillip Hunt, DT Cedric Thornton, Safety O Atogwe who I think these players make the final Roster anyways
3-4 Defensive Players who need big efforts tonight to have a chance of making the Eagles 53 Man Roster (DE D Tapp, LB K Clayton and SS J Jarrett who I believe none of these 3 players make the Roster)

4 Defensive Players who make things interesting with strong performances tonight ( CB Brandon Hughes, Trevard LIndley, Safety Tom Nelson & LB’s R Rau and M Simmons) These players will see some action but need to take advantage of their opporutunities to be considered and maybe move up the Depth Charts