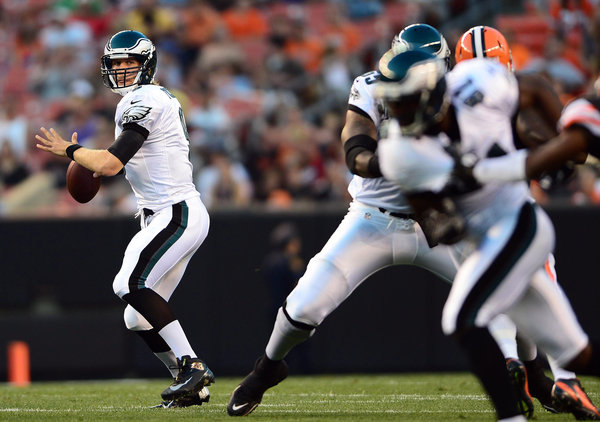 Earlier today Eagles head coach Andy Reid gave the run down on who would play and who wouldn’t play.  He started out by telling us that the starters wouldn’t play in the game on Thursday night.

Demetress Bell will start at left tackle and continue his goal of reclaiming his starting position.

Fullback Stanley Havili won’t play on Thursday.  Reid repeated what he has said previously during the camp, Havili is the team’s starting fullback.

Eagles defensive end Darryl Tapp won’t play on Thursday.  You could take that as a vote of confidence in Tapp.

Antonio Dixon and Cedric Thornton will play on Thursday night.  They’ll be rotating in and out of the lineup.  They’re still competing to make this football team.

Akeem Jordan who just was promoted to the starting Will linebacker position will play a few series which is understandable.  Jordan needs some reps with the season right around the corner.

Starting nickel back Joselio Hanson won’t play on Thursday.  Hanson will be the starting nickel back in the first game of the season against the Browns.  Brandon Boykin will back him up and should Hanson struggle, the rookie will likely get the chance to step in there.

Veteran safety Oshiomogho Atogwe will play against the Jets.  He needs to play well if he wants to make the football team.  Atogwe has missed quite a bit of practice time and he’s also played very little in the preseason.