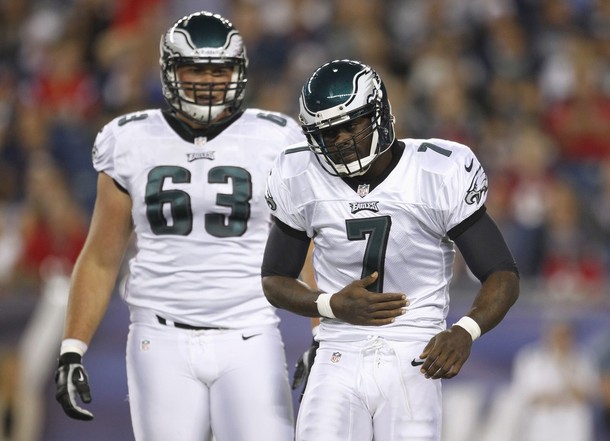 Eagles’ quarterback Michael Vick is going to begin wearing a custom-fitted Kevlar vest produced by Unequal Technologies, which happens to be a company he endorses.  Vick has injured ribs a number of times during his career with the Eagles.

We talked all off-season about Vick changing his game, but I think we can all agree that it’s not going to happen.  He’s always going to be reluctant to give up on plays and he’s going to hold onto the football at times.

The only answer is having a good backup quarterback and making him wear more protection around his ribs.

Vick has always been faster than the rushers who were chasing him, so any time a play breaks down, he start thinking about tucking the ball under his arm and taking off or at least trying to buy some time with his speed and quickness.

Foles scored 29 on his wonderlic test

Most teams want at least 21 for a QB

He’s going to need a Kevlar suit of armor to have any chance of getting through the season without missing any time.

Vick gets hit so much he’ll need extra padding for his ass! Mathis and Watkin sucks. move Bell in for Watkins and Kelly in for Mathis so we can have a smash mouth offensive line. Watkins play like a bitch.

songs – you are such a clueless fuck – exactly how many times were foles and edwards hit behind that same O Line… course, you are to stupid or fucking retarded to have a clue – you guys wonder where vinnie gets his best openings……….

Is there anything in that vest that will help with his ability to read a defense? The Eagles have to ride Vick out this year, it’s becoming obvious he can’t become the great passing quarterback that it takes to win in todays NFL. Foles will probably get some starts this year and become Andy’s project going forward. We all clamor for an elite quarterback, but there are only a few and all 32 teams are trying to get one. The part that frustrates me is the Eagles were early to realize you have to pass to win in the modern NFL, but they favored the running quarterbacks. Give me a tall, good athlete that has relied on his arm and brain for his whole life as the blue print to develop a quarterback.