Eagles Should Win This One, But That Run Defense….. 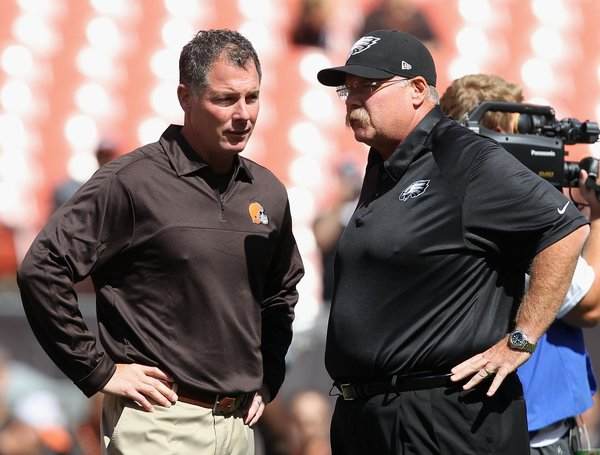 The Eagles announced their inactives and there are quite a few stories in the names.  First of all here’s the list:  Riley Cooper, David Sims, Dion Lewis, Colt Anderson, Menkin, Vinny Curry and Demetress Bell.

Bell is deep, deep, deep in Birds offensive line coach Howard Mudd’s doghouse.  Think about it, they gave him millions of dollars to come here and take over for Jason Peters, but not only did he lose his starting job for opening day, he’s not even dressing.

Lewis has a hamstring injury, so rookie Bryce Brown will take his place and rookie Chris Polk will be the third running back on the roster.

I think the Eagles will win this game today, 27-16,  but there will be some early sweats because of the Browns ability to keep the ball away from our offense with their running game.

Philadelphia has huge advantages over the Cleveland in terms of talent, but the offense must stay away from turnovers and score touchdowns early in the game when they get in the red zone.  I see a big game from Michael Vick because the Birds will go after the Cleveland secondary with formations and numerous personnel groupings (packages).  I think the Eagles have a very creative attack planned for today.

Cleveland is going to put the ball on the ground and try to keep the pressure off of rookie quarterback Brandon Weeden.  The Birds defense is still vulnerable to a good running game and I think Trent Richardson will gain at least 70 yards on the ground, so the Browns will try to keep the ball away for the Eagles offense.

Eagles Win An Ugly One At The End, Despite Four Vick Interceptions

The offensive lines pass protection is a siv, constant penetration.

is this Oline gunna get their crap together today? killing me right now.

Seriously what the fuck is up with the play calling on 1st down…keep it simple and run Shady. 5 carries

Except Desean and Shady this offense looks like garbage!!!

I believe the eagles coaches ruined michael vick.. We will not run .. Theyre slowly turning him into to donavan Mcnabb

That was al aser strike it’s about time dammit!!!

I thought they were playing the Browns……

D looks good, but this isn;t a true test

Vick is an idiot. Doing exactly what I thought he would….keeping both teams in the game. I count at least 5 totally boneheaded throws – lucky only one was picked. We can’t win with this guy.

Has Vick ever hit a WR in stride? Could someone research this.

Where are the Vick apologists now? At this point everyone is aware we’re not going anywhere with this POS at the helm.

Though I’m sure I’ll read a lot of “its the oline” in the days that follow this debacle.

The Browns have handed us the ball over and over (as they are apt to do)….and how does Vick respond? He tries to go Int for Int with a f-ing rookie QB.

Vick really hustled there and made the tackle after his third pick….you can’t say the guy doesn’t try hard!!!

f th Run Defense, it’s the Eagles QB who is the Problem.. All SUmmer we saw the #2 & #3 QB take this Eagle Offense up and down the field for points and TD’s, Yes it was preseason and Defenses were game planning , but the Offenses were planning either.. In what is one of the most QB-Friendly systems in the entire NFL wher e average QB’s can look good and Vick can only get the Eagle to Score 10 Points.. This is garbage, Vick is garbage and a BUM ASS…Bench him before the 2012 Slips away before the leaves even change colors…

Chris Pontder, Jake Locker, Blaine Gabbert all moved ahead of M VIck today..
and Vick has a $20 Million per Year Deal.. Highway Robbery an no reason why Owner Lurie is pissed at some of decisions made by AR and GM Roseman..

Yes, even Mark Sanchez moves ahead of Mike Vick… Good Grief…
Rookies RGIII, A Luck, S Tannehill all performed better in their NFL debut’s than
Super-Suck Vick did..

Love the defense but what about the offense. Great game by Demeco, NNamdi, DRC and Kurt Coleman.

Well….last drive and we were one Cleveland Brown endzone interception drop, and one Vick fumble recovery from losing this game.

Against the Browns. Browns.

Vick with 4 ints, and 2 recovered fumbles. (and it could have easily have been 6 ints or more)

It was one of the worst QBing displays I’ve seen in a long time.

Muthaphuckas is quietttttttt….lmao
There go your 4th quarter comeback win…

DCar
Reply to  Gotta Luv It

I would love to Hear AR say tommorrow in his Press-Conference, We are making a change and going to QB Nick Foles as our Starter and who gives the Eagles their Best Chance to win a Championship in 2012..
It took me about 8 Years to tire of McNabb and only about 2 Years to tire of Vick.. The guy’s a loser, plain and simple.. What has he ever won at any level..

Gotta Luv It
Reply to  vinnietheevictor

I’m clowning….y’all hate so much…
I’ll admit he played like shit
But the difference btwn y’all and me is
I can enjoy the win !!!!
Because that’s ALL THAT MATTERS TO ME

Gotta lov shows a lot guts trying to spin a positive about.Vick , that should have been his fifth pick that was the most atrocious quarterback play by a veteran quarterback I have ever seen

Vick’s a machine, a turnover machine! Against an even marginally better team than the Browns are, the Eagles would’ve been rolled.

I hate that we may be one player away from a SB team.

As I was scanning though the chronology of the comments, Vinnie had me rolling when he’s downright having a nervous breakdown and then mentions at the end of the post that Vick had 2 INTs. Holy crap, I thought, Vinnie’s going to have a freakin’ stroke when Vick throws his 4th INT and almost a 5th. Vinnie, it’s not worth having a stroke over Vick’s nightmarish performance. And by the way, the win/loss column does not discriminate. It doesn’t matter whether it was against just the Browns. The Eagles lost games like this the past few years against equally bad opponents.

Why am I focused on the fact that they got the W and less on the fact Vick played like crap? Because Green Bay went 15-1 in the regular season last year and lost only their second game against the 9-7 Giants. As pretty as the Pack played last year and as dominant as they were, they couldn’t win a single playoff game getting beat by a team that had four game losing streak during the year including a loss to Vince friggin’ Young. The point here: win enough games to get into the tournament and then you have to play your best football. It’s a long season bro. But I’m proud of how the D and Chas Henry stepped up today to overcome an absolutely wretched QB performance. .