Eagles Pass Rush And Pass Coverage Is Strength Of Team 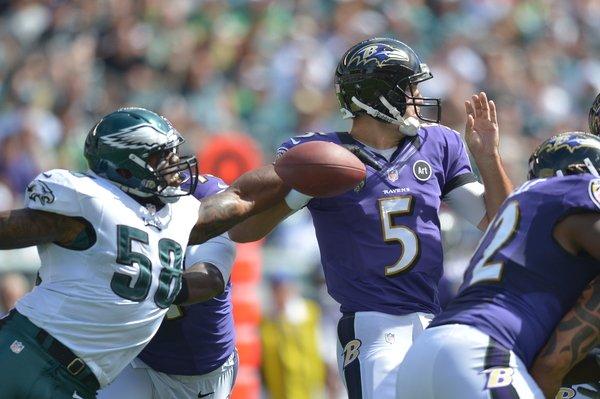 We’ve done a lot of talking about the Eagles offense, their talent and explosiveness, but don’t get it twisted, right now the Birds defense is the strength of this football team.  Their run defense isn’t going to be mistaken for the Pittsburgh Steelers of the 70’s, but their pass defense could be the best the Eagles have ever had.  They’re an extremely fast defensive unit on the line, at the linebacker position and in the secondary.

I was astounded on Sunday at how many times Baltimore Ravens quarterback Joe Flacco threw the ball away.  Flacco has developed into an outstanding quarterback with a much improved ability to scan the entire field and many times he had no where to go with the football.  There was nobody open.

The combination of the Eagles pass rush, specifically their defensive ends getting upfield immediately and out of the sight of the quarterback, along with the jamming of the receivers, which delays their release.  This combination is poison for quarterbacks.

We all know that the Birds have a defensive line which can take over a game.  They haven’t been dominant in the season’s first two games, yet the Eagles still have two wins.  I expect some big games out of this group before the season is over.

The defensive line hasn’t put up big sack totals yet, but they have made life uncomfortable for both of the quarterbacks they’ve played against.  You saw that on the last Ravens offensive play, when Trent Cole and Jason Babin got upfield quickly, Flacco stepped up and knew he had to get rid of the football.

Usually quarterbacks get uneasy when they see defensive ends flash up the field and past them.  They don’t know where they’re at, but they know they’ve got to get rid of the football.  The mental clock speeds up when those defensive ends disappear.

The quarterbacks know those guys are back there, but they don’t know where they’re at.  To be safe, they’ve got to get rid of the football, as opposed to having it knocked out of their hands.

The coverage part of the Eagles nickel defense are more talented than just about any other group in the NFL.  They played well on Sunday, but they can get much better the longer they play together.

It starts with the Eagles corners, Nmandi Asomugha and Dominique Rodgers-Cromartie.  They’re capable of jamming the wide receivers at the line of scrimmage and taking them out of the play.  Both of these guys are tall with long arms, and they can make life nearly impossible for wide receivers when they’re up in the press technique.

Nickel back Brandon Boykin is a tremendous athlete with great strength, speed and quickness.  Add on top of that the fact he’s a tremendous competitor and you’ve got an outstanding slot cover guy.

DRC, Nmandi and Boykin were causing serious problems for Flacco and the Ravens on Sunday when they came up into press technique, jammed the wide outs and delayed the release of the receiver.  It forced Flacco to abandon the wide outs most of the time.

Asomugha needs to be up in press technique every chance the Eagles can get him up there.  He’s not comfortable playing off the ball.  He can be beaten on a regular basis when he’s playing off receivers.

DRC can play either way.  Both of the corners looked back too soon on Sunday.  DRC gave up a big play on a post corner route and Asomugha on a stop and go for a touchdown.

The other area of the defense which has outstanding cover guys is at the linebacker position.  DeMeco Ryans and Mychal Kendricks were glued to their receivers on Sunday.  Ryans has shown us his ability to close on receivers.  He jumped crossing Ravens tight end, Dennis Pitta and tackled him short of a first down.

Ryans made the same play during the preseason and it showed us that he could still run.  Add that to his ability to study offenses and anticipate plays and you’ve got the perfect guy to be making the calls on the nickel.

Kendricks made a couple of tackles in pass coverage, which stopped the Ravens from getting a first down.  Kendricks is just about as fast as any running back in the league.

Analyzing Week 2 In The NFL

Still not happy with the WLB play. we’ve come full cycle at that position. We’re going to Arizona next week, the last time we played there… it was for the right to go to the SB ( 2008 ) the starting WLB for that NFC Champ gm was Akeem Jordan… oddly 5 yrs later Jordan is the starting WLB. he didn’t have a good game in 2008 and he didn’t play well vs ravens. It’s also ironic that we have a good feel overall for the defense for the first time since that Championship game ( JJ’s last gm )

I am still concerned when Teams use Max-Protect and isolate a Speedy Target on CB Asmo’s side and run a deep route down the sideline.. Asmo’s s play in defending the deep pass has been poor since joining the Eagles last year which I think has little to nothing to do with DC Castillo’s Schemes or the Secondary Scheme’s. It’s just that Asmo just plays the ball poorly when in the air in relation to where the WR is..

Asumough doesnt really have deep speed that why he shouldnt be moved around.. Hes a guy you plug and play at the same spot every down because he is so detail oriented..

And demedo rynas had7 tackles a sack and an int. i guess he was just walking through the preseason.. he’s a great player

Mr. !- i hear ya… i would have loved for the eagles to have adressed that in the offseason (especially with all the cap room they somehow seem to have) but they are playing well as a unit. If the young guys can keep this up, we will have a smashem D for years. The only sad part is…… we’ve been asking for this for 15 years and only now get it, As far as the J.J. D’s…. id rather have this. His style was great for a team that lacked the talent to get to the QB with the front 4. This is a real D.

how true, The Def coord gets the credit when you win, JJ was slightly overrated, he was a gambling swashbuckler type of DC. In all honesty Emmitt thomas was a great coordinator . he had no offensive team… bad timing

Jordan didnt play well against the Ravens? besides the play when Jordan slipped I didnt see much of where I can say he didnt play well. He didnt have any eye opening plays, but he didnt hurt us.

That was just a bogus rumour. Not happening.

Funny how wrong we all were about Castillo. He did a damn nice job against a good OC and a good team. We all thought he’d be out maneuvered … Hope he can keep it up. It took bals and a leap of faith to take him as DC

No haveacigar — don’t include people like me in the pitchfork mob mentality that some of you clowns had towards Juan Castillo. I was actually a level-headed fan that looked at the numbers at the end of the year and thought Juan did a good job considering the circumstances.

Bully for you. You were on an island. It seemed that he was lost and bewildered last year. The best thing is if the cameras don’t focus on him it means things are going well

IMO, the jury will remain out on Juan for a majority of this season. That’s not to say things haven’t looked spectacular compared to last year, they have but, I’ll reserve anointing him the best D coach in Philly since Buddy Ryan. Heck, even Vick lit ’em up for 7 games in 2010 and we have yet to see, except for occasional flashes, that QB since.

Thank you, I couldn’t agree more. It’s only the second game of the season and everybody is piling up praises like Juan Castillo is the second coming Jim Johnson. If they can lock down teams and do it consistently all season then I’ll start giving him props but until then the jury is still out on him.