Eagles Are Three Plays Away From Being 0-4 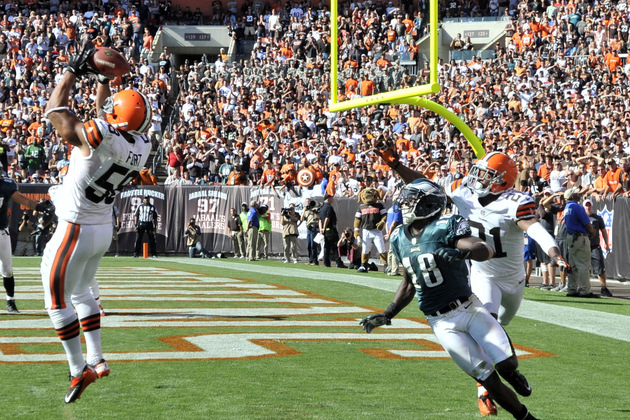 If you tend to see the glass half-empty and not half-full, you are probably disheartened by the start of the Eagles season.  Yes they’re 3-1, but the Birds haven’t played a complete game to date.  The truth of the matter is that this team is three plays away from being 0-4.

Think about it, if the young Cleveland linebacker L.J. Fort, had been able to catch an errant Michael Vick pass in the end zone on the Eagles late touchdown drive, the Birds would have lost the first game of the season to the Browns.  Vick was trying to complete a pass to Jeremy Maclin, who was covered tightly by a cornerback and Fort was standing in front of both of them.  The Eagles quarterback had already thrown four interceptions and he put what would have been his fifth right in Fort’s hands, but he let it go through his fingers.

If the replacement officials hadn’t bailed out Nnamdi Asomugha, by calling back a Baltimore touchdown by Jacoby Jones, the Ravens would have left Lincoln Financial Field with a victory.  Jones, who had beaten Asomugha for a touchdown reception earlier in the game, got behind the Eagles right cornerback on a route in the right corner of the end zone.  With the ball in the air, they began hand-fighting.

Usually wide receivers are given the benefit of the doubt by the regular NFL referees, but the replacement referees were calling the game and that made the difference.  Jones caught the football for the touchdown.  He celebrated and the points were put on the scoreboard and gave Baltimore a 26-17 lead in the fourth quarter.   Wait a minute.  Despite no flag being thrown, the refs were talking.   The touchdown was disallowed and pass interference was called.  The entire Eagles nation all breathed a sign of relief.

And if the Giants hadn’t foolishly tried to throw a deep route to wide receiver Ramses Barden with the clock running out and the team in position to kick a game winning touchdown.  New York was trailing 19-17 and had the football on the Eagles 27-yard line.   They were in position to attempt a 44-yard game winning field goal.  They decided not to count on the field goal, but take another shot at end zone.  Eli Manning threw the ball deep down the right sideline and the inexperienced Barden panicked with the ball in the air and tackled Asomugha while committing an ill-timed offensive pass interference penalty.

If not for the poor decision by the Giants and the foolish mistake by Barden, the Eagles could have lost to the Giants on Sunday night.

Thankfully for the Eagles, former New York Giants Super Bowl winning head coach Bill Parcells was right when he said, “You are what your record says you are”.  Although the Eagles are three plays away from being 0-4, the fact that they’ve found a way to win three consecutive close games, isn’t a coincidence.

If it happened once or twice maybe, but the fact that they’ve found a way to win three consecutive close games, means this is a mentally-tough football team.  Think about all the close games which last year’s Eagles team lost.  I’m writing an article later today about the mental toughness of this football team because it’s the main reason that they’re 3-1.

At 3-1, The Eagles Are Still Improving

This is precisely what Iam talking about. This is the luckiest team I’ve ever seen (I’d add the Vick being tackled no int grounding call vs Balt) to the list.

Can’t keep winning like this. The worm will turn as they say. At one point, playing with fire will get the team burnt.

The same thing came into play in 2010….Vick had 0 interceptions after 6 games or so and everyone was applauding how amazing he was. Several people, myself included, kept bringing up that he was still hitting defenders with this throws, but they were being dropped, that the lack of ints was more due to luck, not his skill. Of course these comments were laughed at. Vick kept playing the same way and the law of averages caught up. 20 some ints in last 20 games.

The law of averages will again catch up to the Birds unless they improve their offence. 19 pts a game and a treasure trove of turnovers isn’t going to cut it for long.

This cat….haha…you don’t know the rules do you? That non call verse Balt was exactly the right call…If a QB is in the pocket and the throw is impacted by a hit/defense then it is not intentional grounding even if it doesn’t make it back to the line of scrimmage! Give that a rest!

Also who gives a shit! Fact of the matter is the Eagles are 3-1 and earned every single victory! Without the 4th quarter drives to go on top, the Eagles would have loss the game! Without the defense holding up during opponents 4th qtr drives the Eagles would have loss the game…in my opinion its about stepping up and getting it done bottom line!
By the way, the great Eli, could have thrown 3INT”s against the Eagles on Sunday…But only threw 1…my point, every QB almost throws an INT! again Give it a rest!

GCobb you are too good for this crap… i bet every team is 3-5 plays from havinga TOTALLY different record. Every team! You know how close these games truly are. come on man this is some sort of joke. or some way to make idiots on your blog go balistic.
terrible.

Parcell’s phrase you are what yiour record says you are is for the losing team that says if this, that, we would be a winning team, but the converse is not true….
The eagles record is the most deceptive indicator of what they are, a flawed quarterback deeply flawed, a flawed offensive philosophy, especially when the weather turns cold, and the biggest flaw of the all, the head coach

And if Andy Reid is somehow this quarterback guru, why is Kevin kolb playing like he is now compared to his time here, why is Vick paying below his career stats, which were pretty average to begin with, but played out of his league in 2010 before Andy got to him, and Brett Farve played pretty much like Vick does now, completely reckless with the football, Andy Reid is the biggest problem

Here come the idiots!!!!!
Let me say, I can’t stand Vick and think he will lead us to false hopes. Good enough to win us some games but will turn the ball over in January.
That said, to say they are lucky or if this play did this or that is armchair negative QB, it is ridiculous.
As for AR damn we’ve won a lot I know, NO SB. I contend that 9/10 coaches in the nfl could win a SB and he is one. The stars have to align. Tom coughlin recieves more game day complaints in NY than AR but has won 2! Point is fans like to bitch. STFU and enjoy the game. Bunch of miseralnle F.ers

How about if Christopher Columbus never set Sail in the Fall of 1492,
I guess we would all still think the Earth is Flat…
Lets talk about this upcoming Match-Up with the Steelers G-Man
How is Riley Cooper looking, new LB Mouten, and Safety Sims, and some of the match-ups in this week’s game

Have a cigar – did you write here come the idiots after you read little jerk off Jakey’s posts – or was that just karma? Jake – you ignorant shit – shut up- your posts are moronic – who gives a rats ass what Reid’s reputation is right now – is that going to help us at all on Sunday against Pittsburg? Save that pantywaste – wannbe – songs-esk whiney bullshit for the offseason

Pman – outstanding point – Bleacher report did a complete breakdown of each kickoff return from the giants – who got blocked, who over ran, who took a bad angle (yeah – Rolle got beat pretty bad a couple times) complete with pictures –

we had a couple good posts a while back doing some analysis.. but that has faded – how about the battle between Dunlap and Bell – how did Bell do aganst one of the best DLs in the game – rumor has it it he did pretty well – how bad is the Watkins injury – how did Reynolds do – how about loking at some mathcups for the week – the Steelers TE against our Defensive rookie of the year?

@JakeMut- I’m happy for Kolb…Happy that he is a starting QB and doing his thing right now! But Jake, the one game that Kolb played lights out was against the Eagles. His stats aren’t “all that” against the other teams he’s faced, but good enough to get the victory, which is all that matters!….dont make it like he’s playing lights out! Had Vick played the way Kolb did in the NE game, you all would be saying he sucks!

LMAO…I don’t understand the article..
Are we not as good as the record but mentally tough ?

This concept is not that difficult. Mental toughness + good luck = wins. An inch or a bounce here and there is a fact of sports. Did last year’s team appear mentally tough to anybody? You have to admit there is a different feel to this year’s team. Nothing wrong with G. $h!T Happens. Some times you get the bounce and sometimes you get the wrong end. Enjoy it! Whichever way you like it.

Fact is it might be one of those years..which is all good until the playoffs when those years go boom. Whats gonna happen is gonna happen no matter what right now. I would rather hear that cooper and anderson are playing special teams and that Juan has a plan to stop the Pittsburgh Wide-outs. It probably is a very shakey house of cards but its all we have for now. Pittsburgh can’t get turnovers and we love turning it over. Our luck might just hold out.

Trent Cole and Jason Babin should be ashamed of themselves. After watching Kevin Kolb get pummeled the last 2 weeks and to have our DE do nothing against the Cardinals is embarrassing. I dont care about the hurries. The Dolphins and now the Rams actually sacked him 16 times and still counting. Then to have 0 sacks on Elli last week the DE have been very dissapointing.

OH for crap fraking sake, give me a damn break! Big game coming up and the article is how bad w………… forget it…..where the hell is Lawlor.

3-1…FIRST PLACE…..WINNERS MAKE THERE OWN LUCK….HE PLAYS DEFENSE CAUSE HE CANT CATCH LIKE A TIGHTEND….THAT WAS A P.I…..AND NMNADI PICKS THAT BALL OFF HAD HE NOT BEEN INTERFERRED WITH….AND MIKE WAS THROWING THE BALL.

Beat Pittsburgh and they’ll be even more excuses of why we should be 0-5….morons.

This is pointless. EVERY championship team gets lucky if you call it luck. No one ever talks about the Eagles perhaps being 11-5 last year if 3-4 plays went their way in 2011. In sports, there are MILLIONS of what-ifs. Giants won the superbowl based on “what-if Tyre didn’t catch the ball against his helmet”. Patroits won superbowls based on “what-if Vinatieri didn’t make the FGs”. If the Eagles win the superbowl based on those what-if plays, I am good with that.