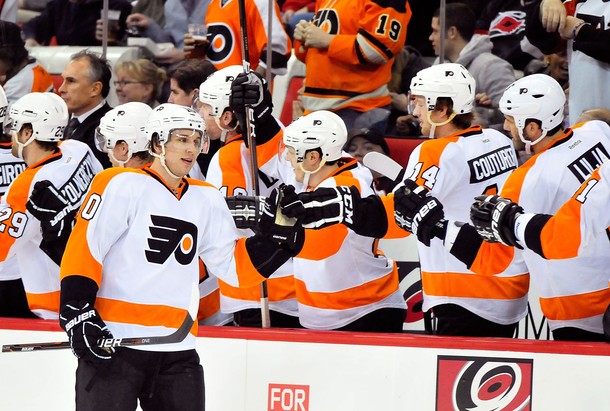 The Adirondack Phantoms, the AHL affiliate of the Philadelphia Flyers, announced today that they have finalized the opening night roster. They also announced the transaction of a number of players to the Trenton Titans of the ECHL.

Per the Phantoms’ media release:

The Phantoms roster currently including 15 forwards, eight defensemen, and two goalies. Ten Phantoms have experience in the NHL including nine who played with the Philadelphia Flyers last year.

There will be plenty of recognition among Phantoms fans on this Adirondack roster. 20 out of the 25 on the roster have played for the Phantoms in the past including 18 players who were with the team last year.

The 25 players arriving in Glens Falls heading into the last week of training camp include:

Additionally, seven players have been assigned to the Trenton Titans of the ECHL.

Schenn scored 12 goals with the Flyers in his rookie season last year and also had six goals in only seven games while with the Phantoms. Couturier also had an impressive debut season as he racked up 13 goals in the NHL at only 18 years old and then later added a hat trick in a playoff game against Pittsburgh.

The Adirondack Phantoms open the Glens Falls portion of their practice schedule on Tuesday morning at 11:00. All practices are free and open to the public. It’s your first chance to check out the Phantoms live and in person!

Future practices this week will be at 10:00 on Wednesday, Thursday and Friday.

– There will certainly be growing pains for Cal Heeter in his first stint in the AHL, but he outplayed prospect Niko Hovinen in the preseason and deserved the roster spot behind Scott Munroe.

– Aside from Zach Fitzgerald, who will be utilized more as an enforcer than a regular defenseman, the cherry-picked defense represents the best defensive prospects that the organization has at the moment.  The added time in the AHL (with better competition this season) should give Bourdon, Gustafsson, Manning and Lauridsen more time to refine their respective games.

The Phantoms also signed Jeff Dimmen, a 26 year-old defenseman who won the Calder Cup last season with the Norfolk Admirals.

– Tye McGinn and Tyler Brown both put up soft numbers in their rookie AHL seasons, but both should see time playing with Sean Couturier and Brayden Schenn over the course of the season.  The increased responsibility and quality linemates should help their development into the power forwards the organization hopes they can be (not unlike how Mike Testwuide was once projected).

– The assignment of Jason Akeson and Marcel Noebels to the ECHL is a bit of a surprise, but not completely unexpected.  Akeson was not among the black aces called to the Philadelphia Flyers this past spring, nor was he listed among the Flyers’ “top prospects” as ranked this summer by Flyers Director of Hockey Operations Chris Pryors in an article by Randy Miller of the Courier Post.  Yet, he was the Phantoms’ top scorer last season with 14 goals and 55 points.

Noebels’ “graduation” from the WHL to the ECHL is more of a lateral move than an advancement. He would face stiffer competition playing in the Deutsche Eishockey League (including Claude Giroux and Danny Briere) if he chose to leave.

Until the NHL lockout ends, the Trenton Titans remain one of the best options in the area to catch hockey and get your Flyers’ fix. Between Hovinen, Akeson and Noebels, the recent roster moves have also given them some players to watch with a higher talent ceiling than some of their previous roster players.

Michael Vick Must Take Responsibility For The Fumbles