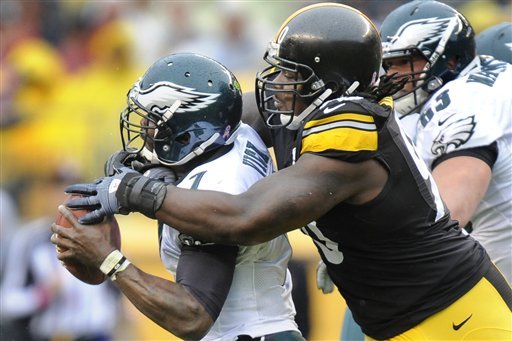 Eagles quarterback Michael Vick played one of his best games of the year on Sunday, if not for the fumbles, but of course you can’t disregard the fumbles.

Still you can see that he made eliminating interceptions a focus of his game, after the first two games where he threw a total of six interceptions.  He didn’t try to avoid the responsibility or point fingers at anybody but himself.

Then he focused on improving his decision-making when he’s throwing the football.  He’s now doing a much better job of not throwing interceptions.  For the last three weeks he hasn’t thrown an interception.

I agree with Andy Reid that Vick has to put that same focus on taking care of the football.

“You just have to hang onto the football”, Reid said. “There’s not much else I can say other than that. You keep it high and tight and cover it in traffic, that’s what you do.”

He fumbled the football four times in the Pittsburgh game.  That’s not a coincidence.  He fumbled the first time and nobody hit him.  Thankfully Pittsburgh linebacker Larry Foote touched him, so it wasn’t ruled a fumble.  He didn’t properly wrap up the football on that first fumble.  A runner has to secure one point of the football in his hand and the other needs to high under the arm pit.

“It was just one of them days”, Vick said. “Everything happens for a reason. If it was meant to be, I wouldn’t have fumbled the ball at the goal line. I have no explanation for it. There’s really none.”

I’m going to let that statement go and give Vick the benefit of the doubt that he really didn’t mean it.  He knows he has to take responsibility for those fumbles.  This problem can be solved by solid fundamentals.

If you look at the tape of the game, Vick didn’t get his right hand around the football when heading toward the goal line.  Steelers safety Ryan Clark came up and put his helmet directly on the football.  Vick has to get two arms around the football when he’s heading into traffic.
On the third fumble, Vick was running with the football loosely held in his left hand, when Steelers linebacker Lawrence Timmons came from his left blind side and stripped him of the football.  If Vick had been carrying the ball high and tight like you’re supposed to carry it, Timmons wouldn’t have been able to get the ball out of there.
It looks cool running around with the football in one hand and hanging out loosely, but it doesn’t look so cool when the football is rolling on the ground.
On the final fumble, Steelers defensive lineman Steve McLendon came up from behind Vick while he was in the pocket and tackled him and the football.  Vick didn’t have two hands on the football as he was waiting to throw the ball.  McLendon knocked the ball out of his hands as he was wrapping him up.  The Eagles quarterback needs to get in the habit of holding the ball with both his hands when he sits in the pocket.
Vick says he doesn’t have a fumbling problem yet he has fumbled more times in his career(84),  than any other quarterback in the NFL.  He must do a better job of protecting the football.
I know this is frustrating right now for Vick, but these mistakes aren’t fatal and the Birds still have a good chance to have a big season.  Still you have to admit your mistakes then correct them.
Share/Bookmark
Tags: Andy Reid Larry Foote Michael Vick Philadelphia Eagles Pittsburgh Steelers