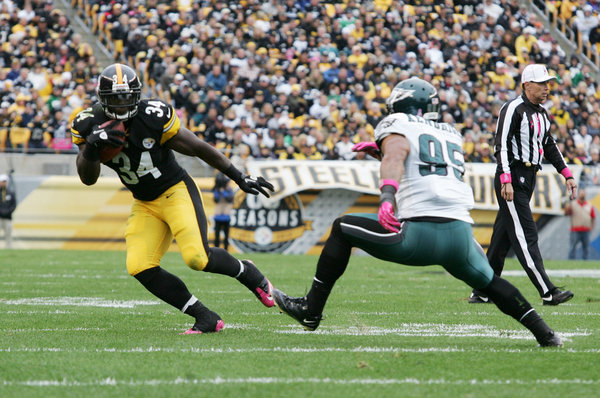 The defensive line has been stymied in their pursuit of opposing quarterbacks.  The Steelers kept their tight ends in at times to help block Eagles defensive ends Jason Babin and Trent Cole.  They were chipped by Pittsburgh’s running backs and the Steelers went into “Max” protection on quite a few of their pass plays.

“You can do the math,” Eagles head coach Andy Reid said. “If they’re keeping people in to protect and they’re running three-man routes, you’ve got to take care of it on the back end.”

Teams have decided to take fewer chances throwing the football down the field, so that they can keep the Birds defensive line under control.  It’s one of the reasons that it’s so important that Michael Vick fumble in the end zone was so important.  The Eagles are a better team when they’re playing with the lead.  Teams have to throw the football more and that plays into the hands of the Eagles defense.

On the key third down plays on the last drive, the Eagles defensive ends made Ben Roethlisberger step up into the pocket, but they weren’t able to get the big sack.  The linebackers and secondary weren’t able to make a play while sitting in their Tampa two-zone defense and their two-man coverages.  In both situations the Steelers attacked the young guys in the Eagles coverages, Brandon Boykin and Mychal Kendricks.

One play was a brush or pick play, while on the other play the two rookies didn’t do a good job of looking up where the receivers were, while still reading where Roethlisberger was going with the football.  They’ve got to come up with a play

The big sack numbers haven’t  materialized for the Eagles defensive line.  They will need to get a better pass rush from their defensive tackles as well as change up their defensive calls to add some blitzes.  Yes, the sack numbers have been down but they’ve been able to hold offenses to 17 points a game in the first five games. The Birds have allowed 85 points so far this season.

Even more important than the sacks, the Eagles weren’t able to force any turnovers this week.  The Steelers defense forced two turnovers which played a key role in the game’s outcome.

I thought the defense played well versus the Pittsburgh Steelers, but they didn’t get the job done on that last drive.

“We held them to 16 points,” safety Kurt Coleman said. “We did a lot of good things against (Roethlisberger) to get after him, and cover up the wide receivers all day long. We definitely gave him a headache.”

“They made one more play than us.  That was the hardest part. We needed to make one more play. We wanted to be in that position. We were ready for it. We were excited to go out there and take the field and win the game for our club.”

“We just didn’t get it done today. I think it’s going to make us stronger.”

On the Steelers first touchdown, rookie outside linebacker Mychal Kendricks took his eye off of Pittsburgh running back, Rashard Mendenhall.  He was a couple of steps away from Mendenhall and was unable to get to him in the open field.  The running back caught a wide route from Ben Roethlisberger and took the ball into the end zone.

A wide route is very easy to cover as long as you get up there quickly on the running back.  His route is simply to run laterally toward the sidelines out of his stance.

The youngster must make sure he can do his own job before trying to help his teammates with their’s.  Kendricks was focusing on Roethlisberger despite being in a man-to-man coverage.  In zone you focus on the quarterback, in man-to-man you must focus on your man.  I’m sure the coaches have been barking in his ear about it since Sunday.