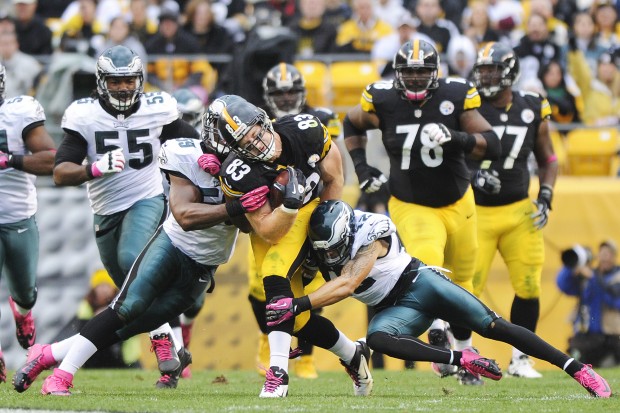 On paper, it didn’t look like a very good day for the Eagles linebackers.  The Eagles allowed 136 yards on the ground, but that stat is misleading and I’ll explain why below.

DeMeco Ryans: Ryans had good control of the defense.  He played 96% of the teams snaps on defense.  He  finished with six solo tackles and led the team with 12 total tackles.  He was also proficient in pass coverage.   In run support, the two-time Pro Bowler looked fluid and quick off the ball.  He is the type of middle linebacker that Eagles fans have long wanted.  It’s rare that you will find a play that he’s not in on.  Ryans collects tackles like a vacuum cleaner collects dust.  He is strong enough to shed blocks and wrap up running backs, resulting in very few missed tackles.  Further, Ryans has good lateral quickness that allows him to make plays sideline to sideline.  He showed all of these characteristics against Pittsburgh.  Overall grade: A-

Mychal Kendricks: This was not a great outing for Kendricks, and definitely his worst day as a pro.  He finished with three solo tackles and five total tackles. He played the same percentage of snaps as Ryans (96%), but played much worse than his teammate in all facets of the game.  Kendricks took bad angles, missed tackles and overpursued at times.  These mistakes led to the Steelers only touchdown of the game.  Steelers quarterback Ben Roethlisberger dumped the ball off to running back Rashard Mendenhall in the flat and Kendricks hesitated and missed the tackle, resulting in six points the other way.  This wasn’t his only coverage lapse.  Kendricks was lost in both man and zone coverages far too often.  Late in the 2nd quarter with the Eagles trailing 7-0, the Steelers had the ball in the red zone.  Kendricks had his eyes on Ben Roethlisberger and failed to see Antonio Brown streaking over the middle of the field through his zone.  Luckily for the Eagles, Brown immediately tripped and fell after he caught the ball (costing the Steelers a sure touchdown).  All that being said, hopefully Kendricks can use this bad outing to improve in time for the Lions game on Sunday.  Overall grade: C-.

Jamar Chaney: Chaney has definitely improved in 2012.  His play is more consistent in coverage and in run support.  He finished with three solo tackles and three total tackles. He played a fewer percentage of snaps than Ryans and Kendricks (49%).  Chaney looked good when he was in.  He was around the ball more than I’ve ever seen him before.  At times he made some very nice tackles. That being said, it’s obvious that the Eagles feel that Chaney has liabilities in coverage.  It’s clear based on snap counts that they don’t view Chaney as a three down player.  That’s ok, Chaney plays adequate in his role.  Overall Grade: B

Casey Matthews – When Mychal Kendricks left the game, Casey Matthews’ entrance into the game had to scare some Eagles fans.  However, Matthews came in and made a positive impact right away.  On his first play, he made the tackle.  Matthews had two tackles in only three snaps.  He showed some of the superb instincts that had some scouts touting him as a quality prospect coming out of Oregon.  His only mistake was in coverage when he left Heath Miller wide open on the sideline, but lucky for him, Ben Roethlisberger over threw his man.  However, in general Matthews was much improved in limited snaps.  Overall grade: B-

In conclusion, the Eagles LBs played a decent game despite the fact that the Eagles defensive line didn’t get enough pressure on the QB.  They deserve a “B” for this game.

(All stats acquired from the Eagles vs. Steelers Gamebook)