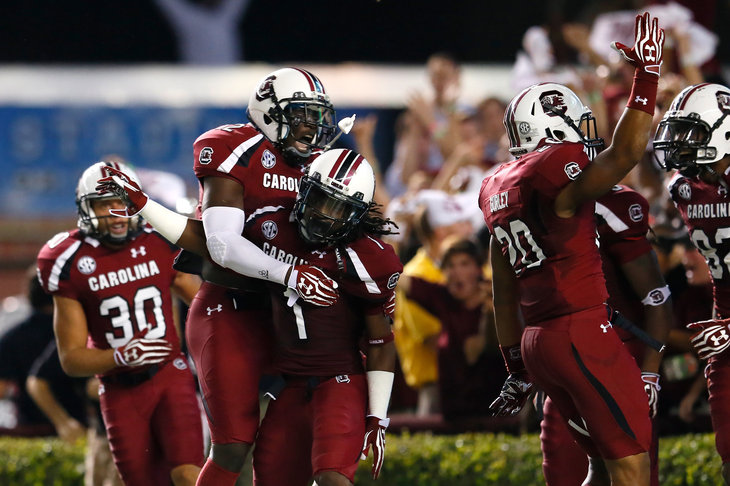 Bittersweet…It’s already the beginning of the 7th week in College football. This past week was moving week. Some moving into the National Championship picture and some moving out. Florida State are you kidding me?  North Carolina State lost the previous week to Miami who got destroyed by Notre Dame Saturday night. There are no excuses many teams are lining up to say thank you. The lack of leadership and mental toughness (which I mentioned in the season preview ) once again reared its ugly head. This was your chance. Easy conference schedule, or so we thought ! Enough with Florida State we have wasted too much time on them already.

Mack Brown, Bryan Harsin, Major Applewhite what exactly were you thinking? The one thing you wanted to avoid at all cost was a shoot out with West Virginia. And you had your chances. Lets go back to the first quarter tie 7-7, 4th and 2 just on the other side of midfield and you go for it? You had a chance to pin West Virginia Deep and at least make them go 80 or 90 yards for a score. The Last thing you do in that situation is go for it. Then with the game on the line mid forth quarter you get a turnover and have the ball deep in WVU territory down 3. Then you run two dives through the A gap! Then on 3rd put Ash in the gun and a bad snap leads to a missed field goal. Let me ask on one hand you think WVU is that good you have to go for it on 4th down at midfield but with the game on the line you play conservative for a field goal ? How about we reverse those two theories punt the ball in the first and go for the win late at home. Credit to West Virginia they went in and won the game. They played with poise and executed under pressure and they move on while Texas plays out the schedule.

There were some other dominating performances by South Carolina, Notre Dame, Florida, Oregon, Kansas State and Ohio State. South Carolina gets rewarded for beating Georgia with a trip to LSU to face a bunch of angry Bengals after getting manhandled by Florida. Notre Dame gets Stanford. Notre Dame has not trailed for a single minute this entire year. Florida gets Vanderbilt and then South Carolina in two weeks. So you could have LSU knock off South Carolina and then South Carolina knock off Florida which leaves Alabama standing who could loose in the SEC title game to Florida or South Carolina follow?  Anyone who said the SEC was having a down year is just wrong this may be the most talented from top to bottom the conference has ever been. The thing that is clear about the BCS  is there are five or six really good football teams. But is Alabama that much better then the all? Interesting Oregon runs an average of 92 plays a game while Alabama runs 62. We saw what Alabama can do the first week of the season. Michigan has played some decent football since then. It seems Alabama takes their foot off the gas in the second half of every game so we still don’t know what they are capable of. One thing is for sure it will be hard to top last weekends action but we have some really great games on tap this weekend. Texas visits Oklahoma, West Virginia plays Texas Tech. I already mentioned South Carolina LSU and Stanford Notre Dame. And can Rutgers get some love? I told everyone weeks ago this was a good football team and they completely shut down UCONN this weekend.

Lets look at the top teams and the remaining schedule:

Alabama — Circle November 10th .. Some may same what Bama plays LSU on November 3rd why the 10th? November 10th Alabama plays Texas A&M a week after LSU. If this game was in Texas I would be all over this as a serious threat to Bama. The Aggies lost 20-17 to Florida in which it was the first game of the year for them. Since quarterback Johnny Manziel has had this team playing well . While they sit currently at #22 in the polls they could give Alabama Problems.

Oregon — I am not sure if everyone gets a chance to watch the Ducks they always are on at 10:30 Saturday evenings. This is another team which I don’t believe we have seen them at their best yet. I watched them dismantle Washington Saturday night a week after Washington beat Stanford. In August Many ( including me ) were a bit concerned that USC had to beat Oregon twice on their way to the National Championship. Right now I have Oregon beating USC on November 3rd and in any playoff situation. They are off this week then get Arizona State next Thursday. The game that could give them a bit of a headache is Oregon State on November 24th. I just don’t see this team losing though.

South Carolina — Never if a team gets to the National Championship game would it have team earned it more then the Gamecocks. Their opponents include Georgia, Arkansas, Missouri, with road games remaining at Florida, LSU and Clemson. Before this weekend I didn’t think they had a prayer of getting through this schedule without at least one loss. They turned a lot of heads Saturday night. As bad as LSU played Saturday they will be a tough out for the Gamecocks Saturday.

Florida — Talk about earning your current ranking? After a lackluster opener against Bowling Green Florida has gotten better and better each week. They already have impressive wins on their resume at Texas A&M and Tennessee and over LSU in the Swamp. They still have Georgia and South Carolina at home and a date at Florida State to end out the regular season.

West Virginia — Yep I had them losing this past week. Yep they proved me wrong. I wrote it in black and white if they run they will be that much tougher but didn’t think they would. They did and they won so I knew the x and o part, but I admit I got the outcome wrong. I am an old school guy I still think defense wins titles so I have them losing at some point.  Geno Smith 24 touchdowns 0 picks is an insane stat. They very well may have a let down this week against Texas Tech, but the dates I have circled are October 20th when Kansas State comes into town, November 10th when they visit Oklahoma State ( a very tough place to play )  and November 17th home against Oklahoma and then the 23rd at Iowa State. If they come through undefeated I will absolutely eat my words but I just don’t see it happening.

Kansas State — An easy team to root for and like. Bill Snyder is a class act and one of the best football coaches in America. This is another team with already an impressive win over Oklahoma that I see falling a bit short in the end. They have two tough road games in a row at Iowa State and West Virginia after they still face Texas Tech, Baylor and Texas. There is always a Cinderella team that comes out of nowhere and if anyone deserves it Bill Snyder does but again I don’t see it happening.

Notre Dame — I love the Irish being a factor again. Here is a team that plays defense. But they are about to embark on the meat of their schedule. The next three games are against Stanford, BYU and at Oklahoma. I think the Irish drop one of these games. If they were to get through they finish up at USC. In the end I think Golson will be the liability. That defense will keep them in every game and Golson will only get better with time. Could they win the next three? Absolutely but if I was going to bet on a loss it would be the game against the Sooners.

The leaves are just turning and there have been six teams that have really been let downs. Two I firmly believe due to horrible coaching Oklahoma and USC, Two who lack mental toughness and the Quarterbacks let them down in big spots , Florida State and LSU. And two who have just played horrible and have five losses already between them Virginia Tech and Wisconsin.

One thing is for sure, within a few weeks South Carolina and Florida, West Virginia and Kansas State will determine who advances on the field and not through a poll. Oregon, Alabama and Notre Dame will also get their chance to plead their case as the days move forward. The playoffs are a while away still. I was torn on how I felt about the four teams and whether it should be increased or not. At this point in the season we have a lot of teams that could make a claim but I think four will be enough as these teams cancel each other out. Although unlikely there is still a chance 3 of these teams finish the season undefeated. Laying out the difficult road each team must travel I wouldn’t want to be the one to tell the 3rd sorry. One thing for sure is this is shaping up to be a wild ride down the stretch. College football is the greatest sport in the world for this reason. Each week is a playoff game for every school.

1)       Alabama — Although ranked the best college team in the world this team has somehow done it under the radar and remains a bit of a mystery.

5)       West Virginia — Showed they are a championship-caliber team. My only concern (and it’s a big one) is the defense.

6)       Notre Dame — I think they are better then Kansas State. Championship Defense but the concern is opposite WVU is the offense.

7)       Kansas State — They are the polar opposite of USC/Oklahoma less talent/great coaching.

Enjoy your week everyone.

How Much Longer Will Reid Stick With Vick?