The Fear Of Tears 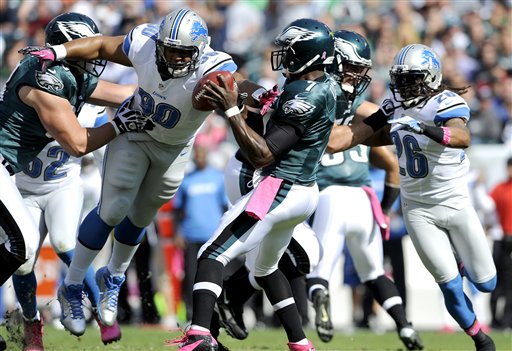 Abandonment and rejection are painful things aren’t they? When you love someone so much and they don’t love you back, when there is a total lack of fulfillment from a relationship or situation that your heart is poured into? Sometimes it isn’t on purpose though because that person doesn’t understand your love for them; in fact, they don’t even realize they’re pushing you away. And to think that you had such high hopes for that relationship… and you still want to keep hope alive.

There comes a time though, if things don’t change, that you have to move on because you have become so empty and such an emotional wreck and you do yourself a disservice by sticking around waiting for the inevitable… for the bottom to fall out, to be further rejected and have an even deeper need to be fulfilled. I am afraid, afraid that the time is near.

The Philadelphia Eagles disturbing and heartbreaking loss on Sunday may just have been the last straw for many around the town. After swearing to myself that I would not allow one of the Eagles worst losses (for me) to date get to me, I fell asleep. I awoke thinking immediately, at least hoping that I had only been in a bad dream. But dreams don’t end like that, only nightmares.

Same ole’, same ole… like living with a dysfunctional family in a dysfunctional household, trying to make everyone believe that everything is fine when it’s so far from it. Do you cry? I’m sure some of you did, I wanted to. Still do. Do you get angry? I am already there! So angry! This season was supposed to be something special. It still could be… I guess… I hope.

But it looks like this year will end up the same as last year and many others we’ve had high expectations for. I am afraid there will be more tears. I am scared that there will be more heartache. I am afraid many loyal, diehard fans will only have more pain, abandonment issues and a long off-season of false inspiration and false hope. Is there still time for this season? I think so… or is that optimism only an opening for more let down and pain?

The turnover issues have not been fixed and the offensive line is suspect to say the least. Has this line loss so much in left tackle Jason Peters and center Jason Kelce? And what happened to the Pro Bowl level expectation of Todd Herremans and Evan Mathis?

And much to my surprise and disappointment, this defense is not a clutch, championship defense. Not right now at least. This is two weeks in a row (against the Steelers) and twice in one game against the Detroit Lions this past Sunday (once in overtime) that the defense couldn’t hold a fourth quarter lead. And the defensive line has been what… not injured but… over hyped? Not a single sack in three straight games! I thought this defense was on the way to becoming something special. Have they peaked already or is it just that the preseason face lift has just not yet fully come together?

Can Michael Vick find something, whatever he seems to be missing to lead this team? Do his teammates still believe in him? More importantly, does he still believe in himself? The Eagles are still 3-3, so are the New England Patriots. But do they have the same fortitude and leadership to come back from what’s not yet even a hole? Right now I doubt it but we’ll see.

After six games into the season and with a bye coming up and then the Atlanta Falcons next on the schedule, when does Andy Reid give rookie backup quarterback (Big) Nick Foles a shot at saving his job for him and the season? That can happen only if Reid will change his coaching philosophy and after 14 seasons, I think it’s safe to say that he won’t.

Andy Reid, I love you. I really do. But it’s time to bring in another football philosopher with new vision to bring a different culture to Philadelphia. How about offensive coordinator Marty Mornhinweg? Will he be one of many scapegoats on this team?  Play calls have been under a microscope in Philly as has the puzzling usage of key personnel. Simply put, I believe Coach Reid’s ineptness is reflecting on the front office and Mr. Laurie will have none of that.

Eagles fans have been waiting, longing for title hopes to come to fruition. Is it too much to ask to see the slightest hint of hope for this town that’s been waiting for so long? The Philadelphia Fanship loves their Eagles but feel like they keep getting kicked to the curb (and in the face). We have many if not all of the pieces to be winners; we only need someone qualified and knowledgeable in putting these pieces into play.

Philly fans are so tired of being misled, abandoned and hurt, tired of loses and incoherent leadership, tired of the pain of rejection caused by a team that promises but never delivers. But this I say, to the most loyal, the most dedicated and committed Eagles fans, there is still hope. I’m a hope fanatic, but if I’m being honest, my hope is fading and I’m afraid… there will be tears.

How Will The Eagles Perform After The Bye Week?

If Marty M or Bobby A were to be fired now, who from the outside would want to join the team now, if Andy R were to resign or be fired at the end of the season? Other than Andy taking over the offensive game calling, is there anybody qualified “in house” for these coordinator positions? “

It’s hard to fathom that a supposedly intelligent man could do the multiple dumb things that Reid has done. Make your offensive line coach your defensive coordinator…. really!!! he owes Juan an apology. I’m a Orthopedic surgeon, don’t ask me to perform open heart surgery. The play calling is about as imbicilic as it could possibly be. I wonder if Reid and Morningwhig go home and just ram their head against the wall for sport and leisure. It would be as productive as their offensive game plans.

Mylow, this is a serious article…I think you speak for every Philadelphia Eagle fan and you are right on point man. Terrific article. Keep them coming!

Mylow, best article on here, in years!!!! Thank you!

BTW, I’m one of the most passionate & brutally honest posters on here, & I agree with every single thing you said. We are tired, of being tired, of this organization.

Man, I am so far away from that place, I had a hell of a good laugh at the end of that game, tears for this franchise? You got to be kidding me, with Lurie, Reid years ago I knew I was being sold a bill of goods, Andy Reid should resign in disgrace

Nice Article Mylow, but I gave up my enotional attachment on these Eagles 20 years ago just after the Buddy Ryan Era when Randall Cunningham and Reggie White to be honest with you.. No one cares about the Fans so why should I gave about the Team and it’s players..Everybody has to do what they have to do from Ownership,GM,Coaches to Players and I have come to terms with that just like I can can choose how emotionalyl vested I will come with a particular Team and Season. I enjoy following my Teams but as I get older, it’s really become less and less relevant to me for it’s only a game and my expecations for this Organization are not very high and actually have become less and less the longer Coach AR and his Philosophy remain.. I am not a big fan of GM Roseman either… Questionable Free-Agent Signings, Draft Picks, Roster-Manangment.. This Team and Franchise is simply average and is fortunate to be placed in PHilly where 1000’s of Passionate Fans will keep dolling out their hard earned $$$ to supoort them, but not me.. What has this current group ever won??