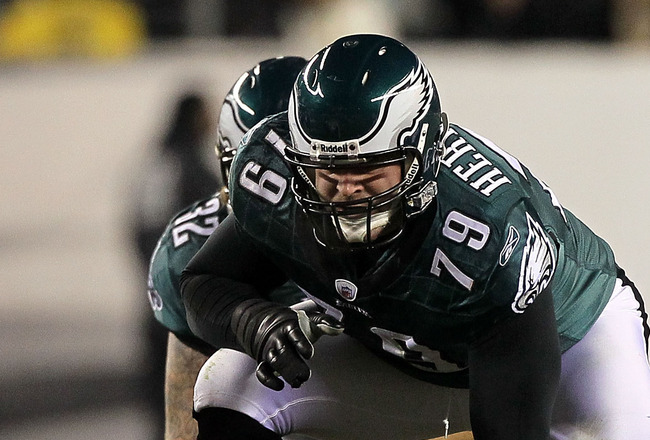 According to CSNPhilly.com, a team official said it looks bad.  This means we could be forced to endure another eight weeks of Demetress Bell and King Dunlap at the offensive tackle positions.  There’s no way Michael Vick will have any time to throw the football and LeSean McCoy will have to get his yardage on his own.

The Eagles offensive line as it is currently constructed with King Dunlap at left tackle, Evan Mathis at left guard, Dallas Reynolds at center, Dennis Kelly at right guard and Bell at right tackle is probably the worst in the NFL.  This formidable offensive line should be called “The Swinging Door”.

Who would have ever thought we would miss Winston Justice this year?  Justice is starting for a 5-3 Indianapolis Colts team.  The Birds gave Justice away for a bag of footballs.

Wow, This JV line will get any QB killed. We better start running the ball and running it a lot… But we all know that’s not going to happen in the Andy Reid era. Unless this defense miraculously turns into a Super Power and attacks the QB, this team is sunk…

does anyone else think that these injuries will give Lurie the excuse to bring Reid back for year 15 ?

there is no way! injuries happen in the nfl, you have to have contingencies and Bell was a contingency! you have to build depth through those coveted 5,6,7 round draft picks that he is always trading back for. he went out and got this ‘specialty’ guy in mudd. this gimmicky blocking scheme. NO — as i stated before i remained loyaly on the AR bandwagon longer than most– but his decisions the last 3 years or so have been dreadful! And in the NFL 3 years of bad decisions = unemployment.
his philosophy changed, he went after an all-star team of 30 year olds and that doesn’t work in the NFL– it never has.
he will get hired, go back to his principals and win a SB within 3-5 years. then we will all collectively jump off of the bridges all over the delaware valley.

Its definitely a reason to bring Vick back .. I dont know about Reid he doesnt seem as focused after the loss of his son.

NO. The Eagles need to move on from Vick, Reid, Morningweg, Mudd, Washburn, April…

Vick is due a boatload of gold if he’s here come spring. There’s no way they keep him unless their next GM/Coach insists.

If the next GM/Coach insist on keeping Vick, we’re in a lot of trouble.

Is that right? and who do you suggest be brought in to replace them, FoodStamp? You all should be very careful of what you wish for! Shit can get worst! Raiders 03-present ring a bell?

They are all gone,,
There were 2 other OT’s that were in all of Summer Camp that were better players than Demetress Bell ..
DJ JOnes nad TOm Welch at least knew the plays and the offense
Eagles Roster Management failed again when they kept D Bell over these 2 Players and also falls on the OL COach Howard Mudd to at least not get any of these back-up players up to speed and have some basic fundamentals about thei blocking techniques and being able to stay out in front of a defenders for 3-4 Seconds… Watch these OL, they turn their heads and body’s upon contact and then can’t see who they are supposes to block.. Unbelievable,I have see Midget-Mite Players have better Techniques than these guys..

fraud, you are saying that you know that these players were better than who they kept yet they cut them? are you basing that on the hours you spent at training camp with them? did you watch and re-watch coaches tape of them? were you in the huddle when a play was called and saw them execute it flawlessly? i can’t see men with real experience cutting players who were better than what they kept…

You mean this isn’t Vick’s fault for holding on to the ball too long? Where is Vinnie when we need him. LMAO

GM Roseman and COach AR Kept Bell to save Face (Like they did with Stacy Andrews) since they paid Bell a $5 Million Roster Bonus and a $4 Million Salary) when they signed him as a Free-Agent.. There was no way the GM Roseman was going to admit to a bust Free-agent signing and especially when they already paid him a $5 Million Bonus ..
Why do I continually have to explain everything to you.. Do you follow this team and it’s tendancy’s ..

i just want to know what you are basing your opinion that they were better players? and you still haven’t said.

Sorry to hear about Herremans who was having a terrible season too..
I think his Career as an OT is over-though , he just doesn’t have the lateral movement to play the outside any longer on afullt-time bases .. I do see Herremans being moved back inside at Guard for the 2013 Season which is where he belongs..
Best Wishes for a speedy recovery..

Because I saw OT DJ Jones and Tom Welch Play and Practice over the SUmmer Camp and PReseason and it was very obvious to me that they were better lpayers, better condition and more physical players that Demtress Bell who is not an NFL Caliber Player and will not even be on a NFL Roster in 2013

dj jones is a free agent now i believe????no one wants him?he is not on a roster in 2012!!!!! hmmm. so you were at every practice, every film session and in every huddle? you know more than AR and Mudd? you are a better evaluator from afar than they are in person? thats amazing

Move Herremans back to G next year and sign one of the following to book end with a hopefully healthy Peters:

Hopefully one or all of these guys will make it to FA.

Clady is a Beast, Long has some back issues and is not quite the player he was 2-3 Years ago.. Bushrod is good and VOllmer is better than any OT on Eagles Squad, another 6-8″ long arms but can be pushed around a bit and has trouble versus smaller speedy rushers

Does anyone think the Eagles will or should Release CB Asmogoah after the Season.. He’s making $11 Million for 2012 and DUe $15 Million for 2013
or maybe they go to him to restructure which never seems to work,
I would cut the chord the day after Season is over

Losing both starting Tackles and the starting Center could save Andy Reid’s job. The owner, Jeff Lurie did acknowledged that another 8-8 season could be excused by a rash of injuries

@Paulman.I dont release any players. I am a true believer in SYSTEMS and Coaches. I believe most players are equal in the NFL and thrive if put in the right system. Of course there are the Adrian Petersons of the world and Demarcus Wares. But for the most part its all it takes is a Jim Harbaugh and different voice to make a difference. All it takes is for a Clemons to get the hell out of Philly and go to a better fit in Seattle. The Dallas Cowboys are loaded but they just dont have the right fit with coaches. I could stick DJax on NE and play the slot and he would catch 120 balls .There is noway that defense is that bad. I just dont believe it. I believe they are predictable , they are not creative and the right combinations arent being played. If JJ was here I guarentee this defense would be different. Saying all that let the next coach come in and hopefully utilize the players the right way

I see Asmo as a player with declining skills,lack of toughness and disapearing confidence.. There is no way he earns $15 Million to remain in Philly next Season, He either takes a big Pay cut and if he doesn’t want to, then Cut/Release his ass.. Sometimes, Players are just a bad fit for Teams and the City they play in.. I believe that Asmo is a bad fit for the Eagles and that his skills have eroded to the point where Teams and OC’s & QB’s are game planning to go after him week after week as he is now identitified as the “weak link” of the Secondary..

I think that they have to release Asmo. He is making too much money for what they are getting. Regardless if they do keep him, they will still need CB help next year, because either he or DRC will be gone.

Irish- you are right. Not many teams could be successful with this many issues with their O-line. Especially with a coach and OC who are unwilling to adjust.

they have adjusted! unsuccessfully but they have changed their game plan- they must run 15 hitch routes a game, wr screen type of things… there is nothing you can do except have a qb that makes teams pay for all out pressure…. brady, brees, manning etc… their o line is horrible and yes those qb’s i mention would have their issues as well but they would also make teams pay which would back off the pressure.

Really, have they adjusted? What about in game adjustments. How many times did Vick get sacked because of an empty backfield last week, but yet they kept calling it. Why wasn’t Havili back there with him if they don’t think that McCoy can block.

And I am not saying that it is all the coaches fault, Vick shares some blame as well.

You left out Big Ben off that list. He is one of the best passers in the game against the blitz.

they make plenty of in game adjustments. they don’t have anything to adjust to. their line is terrible their qb 1. is getting skiddish back there 2. has always had trouble making teams pay.
there is only so much adjusting you can do. i am on record as saying they need a new coach. but to suggest that AR is a moron is moronic in and of itself. I tell you he will get hired as soon as he wants another job, win a SB and we will all have to be talked off the ledge… its going to happen!

I am sorry, when did I say that AR was a moron? He will get hired, but he won’t win a SB. No unless he goes to a team that is already stocked with good players which usually do not hire their head coaches.

Fire their head coaches I mean.